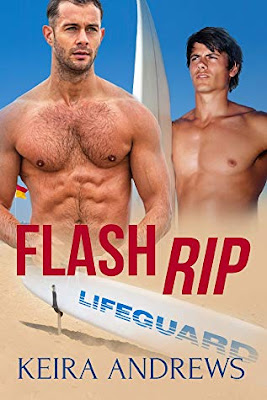 
The most dangerous current is between them.

It took me a few chapters to really get into the rhythm of this story. There's a lot of Aussie surfing talk that went over my head at first, but it didn't take me long to become fully engrossed in Australian lifeguard culture in general and the story of Cody and Liam specifically.

Liam is a former AFL footie start and a veteran lifeguard. Cody is a new trainee, just learning the ropes.

Liam's parents are bigots. His dad throws around homophobic slur like candy and has a shrine dedicated to Liam's former athletic glory. Liam is so terrified of being outed, he dares to hook up only overseas. Never mind that a former hookup left him ashamed of his more submissive desires.

Cody comes from a family of academics, but all he's ever wanted to do was be in the surf and sun. He takes his new lifeguard role seriously and is a quick learner. Cody is smitten with Liam almost instantly, but doesn't dare dream that Liam could return his feelings.

Cody and Liam's clandestine hookups are insanely hot! Liam loves it when Cody takes charge, and Cody teaches Liam you're not less of a man if you like to submit.

I loved the camaraderie between the lifeguards and their acceptance of Cody when Cody first comes out by casually referring to his ex. I liked the scenes where the men rescue people from drowning (fans of Keira Andrews will immediately spot a cameo appearance by one of my favorite couples!).

All the secondary characters are well developed, including Charlene the dog. Liam's fear of coming out and his parents' reaction are realistic. There is some mild relationship drama that leads to a sunny HEA for the men.

I definitely recommend this one! Keira Andrews never disappoints.