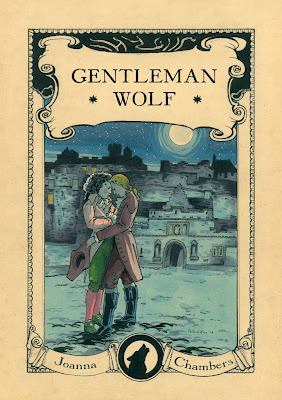 An elegant werewolf in Edinburgh...

1788. When Lindsay Somerville, the most elegant werewolf in Paris, learns that the man who held him in abject captivity for decades is on his way to France, intent on recapturing him, he knows he must leave the Continent for his own safety. Lindsay cannot take the risk of being recaptured—he may have been free for a century but he can still feel the ghost of his old chains under his fine clothes.

While he’s in Edinburgh, Lindsay has been tasked with acquiring the “Naismith Papers”, the writings of a long-dead witchfinder. It should be a straightforward mission—all Lindsay has to do is charm an elderly book collector, Hector Cruikshank. But Cruikshank may not be all he seems, and there are others who want the papers.

As if that were not enough, while tracking down the Naismith Papers, Lindsay meets stubborn architect Drew Nicol. Although the attraction between them is intense, Nicol seems frustratingly determined to resist Lindsay’s advances. Somehow though, Lindsay can’t seem to accept Nicol’s rejection. Is he just moonstruck, or is Nicol bonded to him in ways he doesn’t yet understand?


Note: this is the first book of a duology – the story continues and will complete in the second book, Master Wolf.

Ok so I know I’ve said this before but it bears repeating…I’m not a big fan of historical books but when I read Ms Chamber’s ‘Enlightenment’ series I was totally enchanted. I loved that series, her writing was superb, and each story just enchanted me…and when I saw the blurb for ‘Gentleman Wolf’…in spite of this, I still had reservations because…shifters; again not a big favorite for me but surprise! I was good with this part of the story as well.
This has all led me to the conclusion that Ms Chambers is magic. She took two of what is quite honestly my least favorite story genres and mixed them together and created something that I really, really enjoyed…magic I tell you, her writing is sheer magic!
Lindsay Somerville has been hiding in Paris and I say hiding because that’s where Francis and Marguerite have been hiding him from Duncan MacCormaic after freeing Lindsay from the dungeon in which he’s been held prisoner for years.
When news reaches them that Duncan is heading for Paris, Lindsay is sent to Edinburgh on business in an effort to keep him out of Duncan’s hands. His task is to acquire the Naismith Papers, the writings of a long-dead witchfinder. It’s during the commission of this task that Lindsay meets the very staid architect, Drew Nicol. The man who turns out to be Lindsay’s bond-mate.


Lindsay in some ways is a man who’s ahead of his times…he’s comfortable with his sexuality and while he’s not marching around advertising that he’s gay. If you pay attention the subtle signs are there for anyone who wants to see them. He’s colorful and a bit of a chameleon when it comes to both his appearance and his behavior. Lindsay’s one of the more interesting characters that I’ve encountered in a story for a while now and I really enjoyed him.
Drew’s drawn to Lindsay but at the same time he’s determined to fight the attraction. He’s not comfortable with Lindsay’s flamboyance and peacock attire. In some ways Drew is Lindsay’s polar opposite in terms of appearance and behavior.
While Drew is fighting his attraction to Lindsay…Lindsay is conflicted in his own right. He’s struggling to try and not force himself on Drew but he just can’t quite bring himself to stay away.
Things started out a bit on the slow side for me.  But it was when the events of Lindsay’s business and his personal life begin to get interwoven that things also begin to get really interesting. Even though Lindsay’s business isn’t directly connected to his relationship with Drew, things become increasingly intertwined and before he realizes what’s truly happening Lindsay finds himself face to face with his past and his bond-mate has been drawn into its path. A path that’s going to alter both of their futures.
The dynamics between Francis, Marguerite and Lindsay seemed to be that of family and then there was Wynne who seems to be Lindsay’s Butler/manservant/companion/friend.
‘Gentleman Wolf’ is the first book in Ms Chambers ‘Capital Wolves’ series and unlike some series the stories are not self contained so readers need to be prepared for the fact that the ending of this book is not the ending of Lindsay and Drew’s story and while it’s not what I would call a cliffhanger but more of a natural break in the story, I’m already looking forward to what comes next.
*************************


An ARC of ‘Werewolf Gentleman’ was graciously provided by the author in exchange for an honest review.