Lorraine Tyler should be in vet school, but she stayed behind in her home town of Bend, Minnesota to care for her nephew, spend time with her lover, Charity, and give her momma a chance to complete nursing school.

Lorraine is content until her momma brings home a steady stream of bachelors to straighten her out. Charity is out of town more and more, and Lorraine’s brother-in-law is looking for a new mom for Little Man. To make matters worse there’re new people in town. A politician is drumming up fear and hate, a social worker is flirting with Lorraine, and Lorraine’s new friend, Ricky, is beaten into a coma.

Lorraine suspects Ricky was beaten because of being gay. Lorraine is determined to find out who did it, protect Ricky from the hater who might try to finish the job, and she’s worried she might be next on the hater’s list.

Stray is a story of politics fueling hate, competing romantic interests, and regular people examining their hearts, souls, and hormones. Will the people of Bend harbor the fear-rattled haters of some, or will they provide sanctuary for all?

It was supper time on a weeknight and there were two vehicles I didn’t recognize and a hearse parked next to our farmhouse. It wasn’t really a hearse, it was Pastor Grind’s tan Toyota, but any visit from him meant bad news. God how I hoped Momma had started a book club or extorted people to attend a Tupperware party. More likely she was bringing me a parade of potential husbands. She wanted to straighten out her queer daughter, me. I didn’t know if she was acting alone or if she’d again claim she had God on her side. Maybe she got Pastor Grind to agree to marry me to one of those men on the spot.

“Lorraine, Lorraine!” Momma came rumbling out of the house onto the open front porch, waving her arms. “Don’t change out of your college clothes. We have guests for dinner.”

It’s not like I routinely changed clothes in the yard. I parked my truck in between Dad’s beat-up pickup and Momma’s dented station wagon. Momma had parked on half the pink flamingo pair of lawn ornaments Dad had installed the day before.

“We’re having chicken. Ricky wants to learn to make my gravy.” Momma wiped her hands on her denim apron.

Before I could ask her who Ricky was—like I didn’t already know he’s some guy she found at college and deems him a good husband for me—the only requirement being a penis in his pants—she put her hands on her wide hips like she had more to say. “That Charity girl is here too, but she’s not staying.” Momma swiveled around and marched to the house.

My girlfriend, Charity, was there. Finally, some good news. At least it meant she was driving her dad’s car and he wasn’t with her. There was no way that holier-than-god man would come to the queer’s house and have his daughter with him.

Dad and my three-year-old nephew, Little Man, came out of the barn with the dogs, Sniff, Pants, and Satan. Dad was telling Little Man some damn animal story—something about what they can tell from smelling another dog’s pee. Little Man and the dogs came running to me. “Raine, Raine, we’ve been throwing balls for the dogs.”

Most days I took care of Little Man, but Tuesday was a school day for me at the junior college where I had enrolled in as many math and science classes as I could manage until I left for Grayson School of Veterinary Science in Duluth. Grayson wasn’t a top ten veterinary school, but it was my first choice because I didn’t have to have a bachelor’s degree before entering their program. That was good for me since I had already delayed my college entrance by a couple of years because of the needs of my family.

Grayson accepted two years of college level science and math and allowed degree candidates to take summer classes for the entire four years of pre-veterinary science programs. It floated my boat, but what really got me excited was if I was short on the college level courses, which I was, they’d let me take skills and knowledge testing which would count toward coursework. All those things I’d learned from helping Twitch with his vet business could be parlayed for course credits. Sweet.

Little Man hugged my legs. When I looked at him and Momma and Dad, I had a hollow ache in my chest for who was missing. My twin sister, Becky, was dead. She left behind a dope of a husband and the sweetest little boy I could imagine existed in the world. My brother-in-law Kenny’s truck was gone. He must have still been at work at the lumber yard.

I scooped up Little Man. He wore the matching blue and white T-shirt and pants I’d put him in early in the morning, but he was filthy from playing. As I kissed his doughy neck, I sniffed him to know what he’d done while I was away. I detected the scent of outdoors, dogs, dirt, and snickerdoodle cookies, an average day.

I dropped him off in the mudroom. He climbed the green plastic, frog-faced step stool so he could reach the mudroom sink to wash his hands, and I looked for Charity. Charity leaned against the kitchen counter. Damn she looks good. I forgot all about supper. My whole body hungered for her touch and the sweet things she always said to me. I wanted to wrap my arms around Charity and kiss her until my lips fell off.

No kissing for me. Momma came back in the kitchen looking like she owned and ran the place, which she did. Momma and Charity were as far apart from each other as possible in the room and despite the temperature outside being near eighty degrees, the air temperature between them was colder than a well-digger’s lunch, as my dad would say.

“Hi.” I touched Charity’s shoulder. “I’m glad to see you. Why are you driving your dad’s car? You about scared me to death.”


She smiled and squeezed my hand quick, her eyes glued on Momma. “Dad needed my truck to help somebody move some boxes or something.”

I smelled her shampoo and she’d just put on some lip gloss I wanted to methodically taste and remove.

Momma gave the queer girls only cursory attention. I almost snuck a kiss, but I realized half a man twitched and kicked on the kitchen floor. The other half of him was tucked in the cabinet under the sink. When the top of him emerged I about lost my mind.

Christ, she’s at it again. This time the man was old enough to have possibly signed the Declaration of Independence, or at least the Constitution.

“Momma, I hope you haven’t been trying to find a date for me again.” Next, I addressed the fossil under the sink. “Ricky, I’m sorry you come all this way for nothing but a busted sink.”

Just then Little Man came in the kitchen. Momma’s face brightened as she whisked Little Man into her arms. He dried his wet hands on the front of Momma’s good apron—the full-length one with chickens embroidered on it and pockets on both sides of the skirt. Next Momma pulled me into the utility room with her and Little Man. “Excuse us.” She slid the accordion door closed.

Oh Christ, she’s going to murder me. No. She wouldn’t murder me in front of Little Man and so many witnesses in the house, but there was a fair chance she was going to lecture me and possibly brain me with one of her sacred books. She appreciated the Old Testament shock and awe. She didn’t much go for the patient tolerance of God’s later work or “the mushy parts,” as she called them. However, she did like the way her slim New Testament fit in the oversized pockets of her denim apron, and she liked the way it fit nicely in her hand when she wanted to swat someone, usually me. But she didn’t hit me. Instead, she reminded me of the way her mind worked and how she got everything done with speed and efficiency.

“That’s not Ricky. It’s Harold. Has it ever occurred to you, Lorraine, that we needed the sink replaced?”

That’s Momma for you. She could probably kill more than two birds with one stone. She weaseled getting our sink fixed and paraded a bachelor for my appraisal. She was so efficient, I was surprised there were any birds left.

Momma continued, “Besides, you can’t marry Harold. He’s already engaged to a gal from the square-dancing club.”

Little Man, at three years old, needed an interpreter. I caught most everything he said because I listened to him most days. He had acquired a new habit of repeating parts of whatever he’d heard somebody else say.

“Well, do-si-do and an allemande right if I’m not relieved.”

“Smarty pants,” Momma said. “Behave yourself. It wouldn’t hurt you to try to make friends with our guests. Supper is almost ready.”

“Great. I want to sit by Charity.”

What? Hadn’t we made any ground at all? Couldn’t my girlfriend at least enjoy a meal at our house? It’s not like we would make out at the dinner table.

Momma pushed me out of the utility room, put Little Man down with half a cookie, and helped Harold get up off the kitchen floor.

“Can’t you stay for supper?” I asked Charity.

Charity glanced at Momma. Then she looked at her feet and bit her lip.

Those lips. I knew how pillowy soft and warm they were. The first time she ever kissed me it felt like I had known her mouth forever.

Charity turned her back on Momma and she half whispered and half gasped, “Lorraine, are you ever leaving for college? This is too small, too much.”

“How can something be both too small and too much?” I tried to joke, but Charity wasn’t having it.

“I don’t know, but Bend is and you need to decide. I’m going home.” Charity headed to the door.

I wanted to remind her I was moving as fast as circumstances would allow. I’d enrolled in as many science classes as the junior college offered while I worked with Twitch…and I minded Little Man. But I didn’t speak up for myself.

“Are you still coming over tomorrow?” I whispered. “Little Man has some new plastic animals. I’m thinking of decorating the kitchen like an African safari.” My scheme kept Little Man busy and allowed me to study animal physiology and anatomy at the same time.

“See you tomorrow.” Charity called over her shoulder with very little enthusiasm.

I watched Charity through the window walking away. My heart raced. I almost ran after her, but then Momma grabbed me and harped at me to go sit in the dining room and talk to the guests. Why is everybody so mad at me? Why is everyone pressuring me to move faster or be different? Momma wanted me to not be queer and marry a man. Charity wanted me to leave Bend before I had Little Man settled. I took deep breaths and prepared to enter the dining room. 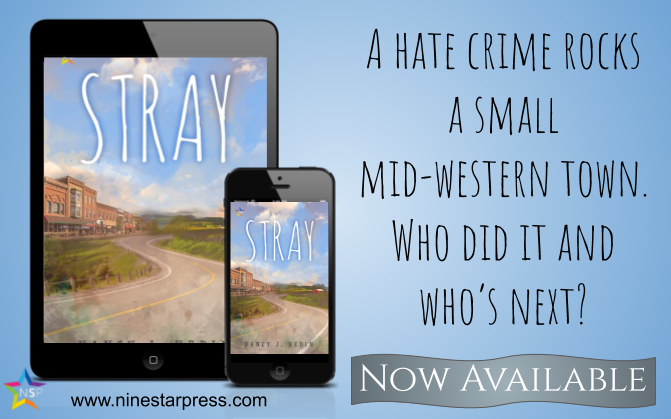