Blogtour: A Pocketful Of Stardust by J.P. Barnaby and Rowan Speedwell

Please say hello to JP Barnaby and Rowan Speedwell with

A Pocketful Of Stardust 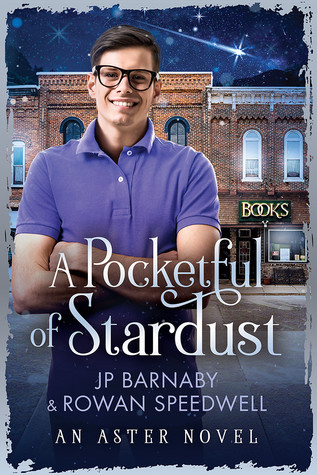 Noah Hitchens loves the New York City life he worked hard to build. But when his father dies and leaves him a bankrupt bookstore in their sleepy Georgia hometown, Noah knows he has to save it. Unfortunately, he doesn’t know anything about business. He finds unlikely help in Henry, the man who owned Stardust Books before his 1966 murder, and Kyle St. James, a shy but kind-hearted out-of-towner with a past almost as mysterious as Henry's.

Kyle came to Aster, Georgia, looking for redemption. On the run and out of hope, he’s just trying to get on with his life. Then he meets Noah, a ghost, and a big sloppy lab named Jake who redefine his idea of living. But his past is closing in, and when it finds him, they could lose everything.


Noah slid closer to the desk and added a digital rendering of the image upload screen before using a numbered list to outline the exact steps needed to perform that function. He painstakingly walked through each mouse click, each option selection, and each message the end user would see. The work was tedious, made more so because Production released the new software to Quality Assurance after deadline and QA released it to Noah's team after deadline. But it paid pretty well, which kept him in New York. The apartment he shared with Yeira was just a few blocks from the office. A few blocks that included coffee, sandwiches, and books-the trifecta for a happy life.
"How you doin', Noah? Are we going to make it?" Karen popped her head around the corner of his cube, naked panic clear on her face.
"I've just got the section on the last toolbar to go." Noah glanced at the low right-hand corner of the laptop screen to check the time. "Yeah, we'll make it. If...."
"If what?"
"If you order out lunch?" he asked with a hopeful grin.
"You got it. Pizza good, or something else?"
"After livin' in Georgia all my life, I'll never get enough New York pizza," he said with a forced twang. He'd started to lose the accent at NYU, but seven years in the city had nearly obliterated it.
"Keep working. I'll have Caleb order."
He turned back to the keyboard and moved to the next item on the checklist. When he'd left Aster, Georgia, for New York and an English degree, he'd been thinking more Capote or Ginsberg than Gates. He thought he'd be sitting in a café with his laptop, observing life, and writing the great American novel. Only he liked to eat and live indoors. So like most great novelists, he got a real job writing tech manuals and perpetually tinkered with the novel that lurked in the back of his desk drawer.
Noah had just added the last line for that section and clicked Save when his phone rang-not his office phone but his cell phone. The number on the screen had a 678 west Georgia area code, but he didn’t recognize it. Glancing up to see Karen’s office door closed, he slid his finger across the screen.
“Hello?”
“Noah?” a deeply Southern voice asked.
“Yes, this is Noah Hitchens.”
“Noah, it’s Mrs. Mackey. From next door to your daddy?”
Noah sat back in his ergonomically correct chair and dropped his
pen on the pad. He’d never spoken to Mrs. Mackey on the phone. He’d played in her yard, eaten her famous peach cobbler, he’d even cut her grass, but they didn’t really pick up the phone.
“Hi, Mrs. Mackey, of course I remember you. What’s—”

“Noah, honey, I don’t know how to tell you this, so I’m just gonna come right out and say it.” Her voice held tears, he could hear them, and the phone grew hot in his hand.
He remained silent, and she continued.
“I went to take your daddy a cobbler. You know how he loves a good cobbler. Anyway, when I got to the house, Jake was a-howlin’ like crazy an’ no one answered the door. I decided to leave the cobbler on the counter, so I went in through the back and—” She stopped like the burden had become too much.
It took a long moment for Noah to find his voice. “Ma’am, did something happen to my dad? Is he in the hospital?”
“Oh, honey. I called an ambulance, but there wasn’t anything they could do. They rushed him over to County, said it was a heart attack, but.... Noah, sweetheart, he didn’t make it.”
The world went cold.
“Noah?” Karen asked, and though he could feel the hand on his shoulder, everything felt very far away.
“Mrs. Mackey, you’re saying... you’re saying my dad died?”
“Noah, I’m so sorry. I asked Doc Simmons to let me call so you didn’t have to hear it from a stranger,” she said quietly, finality in her response.
“I—I don’t....” There was nothing he could say. His mind went
blank in an instant with a soft, insistent buzzing—bees filling his brain. “I know, honey. I’m gonna call the Garners. They took care of
my Frank, and they’ll take good care of Charlie,” she told him, and he recognized that take-charge quality in her voice that old Southern women got in an emergency.
“Okay, I... I’ll be there as soon as I can.” He dropped the phone on his desk without waiting for a response.


It couldn’t be happening.

Connect with Rowan by leaving her a message here.