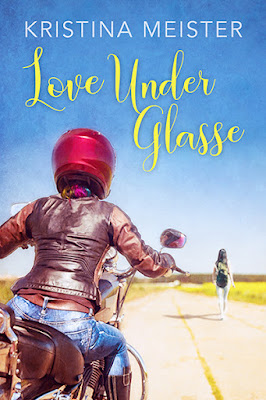 El Glasse’s mother controls her life. What she does, who she dates, even what she’s allowed to say. El only has two ways of holding onto her freedom. One is her popular anonymous blog, hidden from Mama Glasse. The other is what she so often blogs about: her feelings for Riley, the girl who works at the ice cream parlor. Riley is fierce, free, and rides a killer motorcycle, and El cannot help but love her. But Mama Glasse can never find out about her sexuality—unless El is willing to rebel.

When El runs away, Riley feels responsible. She knows what it’s like to be alone, and she can’t deny her deep desire to learn El’s story. In a move she might end up regretting, she makes a devil’s bargain with Mama Glasse to hunt El down.

Riley isn’t trying to bring her home though, because she knows an evil spell when she sees one—a spell of fear and shame El is finally starting to break. This huntress might lose her own heart, but it’s a risk she’s willing to take.

Writing a fine line
One of the most difficult scenes for me to write in Love under Glasse was actually one of the first I envisioned. The trouble was, I couldn’t justifiably stage it the way I really wanted to, because that would make me a terrible influence.
Writing for young adults creates a unique series of challenges and all the authors in the genre whom I know all express this sense of walking a fine line. We can discuss difficult subjects, like substance abuse, sex, or potentially dangerous behaviors like running away from home, but we have to be cautious that we are responsible and don’t end up encouraging kids to try these things out. We can’t vilify or glorify, but must express things as honestly and accurately as possible. This is one of the reasons that despite all her plans and savvy, our Snow White character El, had to have a horrible encounter on her cross country trek. It couldn’t all be sunshine and the hills of West Virginia.
She’s run away from an abusive home, true. She’s being chased by people who want to force her back to it. She’s being smart and circumspect, but even so, she has to cross paths with someone truly dangerous, for her situation to ring the least bit realistic or frankly, socially responsible. I had to remove that shiny coating of adventure from the concept of solving problems by escaping them.

This evil character confronts both girls and while El may cross paths with him first, it’s Riley who ends the fight. As a character, Riley has quite the temper when provoked. She has suffered a lot of tragedy, and because she comes from a family full of tough people, she’s been taught to fight back. Her father, who is an ex-con, actually must counsel her through being rash and into staying focused and logical. In the scene it was difficult for me to stage, Riley encounters El’s attacker, a man she believes to be truly the worst kind of monster: a sexual predator. A fight ensues and she manages to get the upper hand. In the scene as it stands, her father talks her down and the perpetrator escapes (Don’t worry, Riley has a plan).
Originally, however, I envisioned Riley living up to her nickname of “Tizona” which means “firebrand” and is the name of a sacred sword in Spanish mythology. I wanted her to kick in the door, interrogate the SOB about El, and burn down the site. Strike a match, throw it in, and walk away, leaving him for better or worse.
But obviously…unlawful imprisonment and arson are wrong. At least that’s what I’m told.
So it couldn’t happen that way. It was through many conversations with other authors, beta readers, and friends, that I came to the current scene, which I believe is far better for the character, making her more realistic, and less an expression of my own egotistical urge to raze enemy villages to the ground. It demonstrates her vulnerability, her reliance upon cleverness, rather than brute strength. In the scene as it stands, she’s afraid, she’s concerned for her friend, she feels the urge to get revenge, and all of that turmoil has to be overcome quickly, to make it out safe. The current scene gives the character far more opportunity to be human, to be well-rounded, and to evolve.


While it may change the game a bit, writing fiction for young adults actually forces me to be a little less lazy about storytelling, causing me to rethink things from every angle, multiple times, until my agent is ready to tear her hair out in frustration. I’m fairly certain she’s got a bald patch with my name on it.


To celebrate this release, Kristina is giving away a custom ordered biker-style patch that represents El and Riley, as well as a signed copy of her award-winning novel Cinderella Boy! Leave a comment with your contact info to enter the contest. Entries close at midnight, Eastern time, on August 31, 2019. Contest is NOT restricted to U.S. entries. Thanks for following along, and don’t forget to leave your contact info!