Blogtour: All Hours (One Night in South Beach #6) by Andie J. Christopher 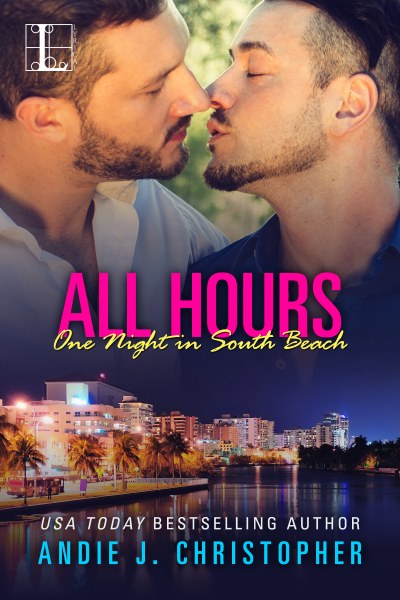 Felix Pascual misses being someone’s boyfriend, which is why he’s willing to get set up by the only Hernandez he'll admit to liking (out loud)—Lola. But when he gets to the restaurant he finds that Lola has matched him up with none other than Joaquin Delgado, a man who has never shown one iota of interest in him. And Joaquin doesn’t seem any more open to Felix's unique charms this time around.

Joaquin will do anything for his grandmother. Even give a foul-mouthed, flashy Puerto Rican caterer who gets on his nerves—and makes him thirsty all at once—a chance to run his kitchen after he’s injured After all, it's just a few weeks. And he won’t be tempted since he’s given up on dating anyway.

But Felix won't give up without the satisfaction of getting Joaquin to admit that he wants him. Felix is stubborn, and his growing desire for Joaquin is about proving a point. After all, it can't possibly turn into something real.

Chapter 1
Felix Pascual stared at his half-empty closet, chagrined to find nothing he wanted to wear. He didn’t want to be leaving his house, much less finding something in mesh that would bring all the boys to the yard.
He wanted his ex-boyfriend back.
The space that Roman had left behind when he’d cleared out a few months ago taunted him because Roman had left almost a year before he’d actually moved to Europe to open his new club. He’d just left his clothes and furnishings with the promise that things would get better until recently.
Felix sat down on the edge of the bed, shoulders hunched. He’d never been such a sad sack after a breakup before. But Roman had been his longest-term boyfriend. Years of his life he’d spent with this man. And sure, the terms of their relationship hadn’t been ideal—Felix hadn’t been interested in an open relationship, but he’d loved Roman so much that he’d agreed.
His ex was truly a dazzling man. When they’d met at an event Felix’s brand-new-baby catering company had done the food for, he’d been shocked that the famous club owner had paid him any attention. At first, Felix had ignored the other man’s overtures, figuring that he’d just been really into the canapés. But Roman had persisted, and Felix had given him his number.
It was kind of an old-fashioned and quaint meet-cute that belied the ugly ending of their relationship. The romance had really only lasted a few months, but Felix had hung on for years, both dickmatized by how hot the sex was and desperately in love with the man.
Now, he didn’t know what he was doing anymore. Didn’t know where he belonged. The only person he spoke with outside of work was his sister, and she was starting to worry. He’d lost touch with a lot of his friends, and she insisted that they go out clubbing.
She was waiting in the living room, and her patience was probably about to run out in the next ten seconds.
Sure enough, as soon as he flopped back on the bed and stared at the ceiling, the clack of her shoes echoed along the floor.
“What the fuck are you doing?”

“Getting dressed.”
“You can’t go out in sweatpants.” She sniffed. “I know you don’t actually care, but you have to dress like you care. Even if you’re doing a good impression of Miss Havisham.”
“Says the woman who pined over the same man for five years.”
Maya sat on the bed and petted his damp hair. She’d always been his rock, and him hers. Now that she was married to the man of her dreams—the one she’d spent years trying to get over before Javi had gotten his shit together—Felix felt like their dynamic had changed. Before, it had been them against the world—mostly against their ghastly, abusive con artist of a father. But Maya had found her happily ever after with Javi Hernandez, and Maya didn’t need her big brother as much anymore.
And he wasn’t sure that he liked needing her more than she needed him. It made him feel weak and pathetic, even more than Roman leaving him had made him feel. He felt unmoored.
“That was different,” Maya said. “Javi and I were meant to be. I don’t think you and Roman ever were.”
A thread of anger fought its way through the cloud of sadness floating over Felix’s head. “You don’t know what we had.” He knew he sounded like a petulant child, but he didn’t care. And he wasn’t willing to admit that maybe everything with Roman beyond the first few months had been a huge mistake. Wasn’t ready to give up on the almost-perfect life he thought he’d had.
“Roman was an asshole.”
But he’d been his asshole. Felix sat up and stared at his sister. Her gorgeous face didn’t hide the concern that had become a palpable thing in the last few weeks. “I loved him, and you—you out of anyone—you know what that’s like.”
“He never loved you as much as you loved him.”
“You don’t know that.” He rubbed a hand over his hair, always unruly, but even more so these days when he spent a lot of time pulling it as though it would pull out the grief and sorrow he was feeling. “You didn’t see how we were together at the beginning.”
“That’s why it’s different, baby.” His sister nudged his cheek with the knuckle on her index finger. “The beginning with Javi sucked. We both had to let go of the bad past to get where we are. You and Roman just kept building bad things from the past on top of bad things from the past until there was nothing left of the good stuff.”
She was right, but that still didn’t mean that she could just snap her fingers and he would be over it. Right now, it felt as though he would never be over the ache in his chest that Roman had left when he’d taken all of his clothes and half of his furnishings. The only room in the house that felt whole right now was the kitchen—the only room in the house that had ever fully belonged to Felix.
“I feel like there’s no good stuff left inside me.” He felt empty, hollowed out. And he knew that going out and grinding on boys at the club—Roman’s favorite pastime—wasn’t going to make him feel full again. “Can we just cook dinner and get drunk here?”
Maya shook her head as her glossy hair brushed against her colorfully tattooed arms. “I get one night out without my husband bodychecking any dude who looks at me, and I’m going to use it.”
“That’s only because we’re going to a gay club.”
“Still, sometimes I want to get my dance on without Javi glowering at anyone who brushes my arm.” The wistful smile on her face belied the fact that she loved how much her husband grumped about other men looking at her. Felix knew that she felt more secure when her man got all alpha on her and that she was strong enough to put Javi in his place if he ever stepped out of line.
Felix hated how straight people always projected their fucked-up gender roles on gay couples, but he couldn’t help a tiny bit of jealousy at how his sister’s man treated her. He couldn’t help wanting that for himself, even as he realized that his ex had never been about giving him that.
“Fine. I’ll go out.” Even though his stomach sank at having to flirt and pretend that he was ready to move on, he could humor Maya. This wasn’t his idea of quality time, but he would take what he could get. 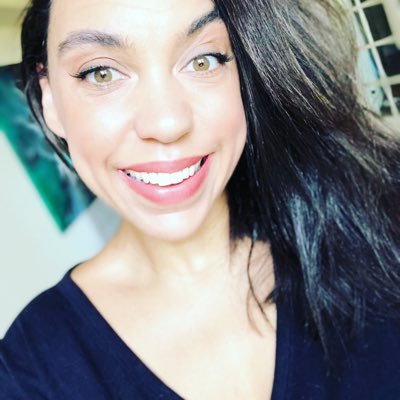 Andie J. Christopher writes edgy, funny, sexy contemporary romance. She grew up in a family of voracious readers, and picked up her first Harlequin romance novel at age twelve when she’d finished reading everything else in her grandmother’s house. It was love at first read. It wasn’t too long before she started writing her own stories—her first heroine drank Campari and wore a lot of Esprit. Andie holds a bachelor's degree from the University of Notre Dame in economics and art history (summa cum laude), and a JD from Stanford Law School. She lives in Washington, DC, with a very funny French Bulldog named Gus. Please visit her at andiejchristopher.com.