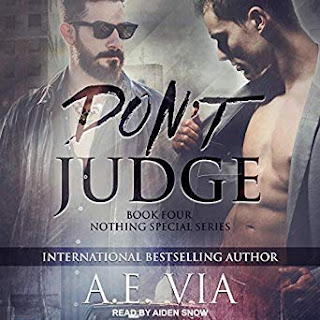 Detective Austin Michaels didn't think life could get any better after he was accepted into the most notorious narcotics task force on the East Coast, headed up by two of the baddest Lieutenants with the Atlanta Police Department - Cashel Godfrey and Leonidis Day.

Michaels knew he would fit right in as the team's sniper, having received his fair share of commendations for marksmanship. He was just as badass as the rest of the twenty brothers that made up their team. But when Michaels lets their prime suspect get away from a huge bust with over a quarter of a million dollars in drugs, he's willing to do whatever it takes to make it right.

Left with no other options, God chooses to bring in outside help, calling on his long-time friend and bounty hunter, Judge Josephson.

Judge was considered one of the best trackers during his enlistment in the United States Marine Corps. After retiring, he used those skills to become one of the most sought out fugitive trackers in the country. When Judge gets a call from his old friend needing his help, he quickly tells God, yes.

‘Don’t Judge’ is the fourth book in A.E. Via’s ‘Nothing Special’ series and it’s also the fourth book in the series narrated by Aiden Snow, who has once again created an incredibly enjoyable audio experience.
Having the same narrator for audio book series is without a doubt one of the things that I enjoy the most and if I’m really lucky that narrator is not only the same person…they also do an awesome job with the narration and for me, Aiden Snow has proven his ability to do this.
I’ve come to the conclusion that the best way to enjoy this series is by not expecting things to resemble the real world especially when it comes to the legal aspects of this story and having done that I can honestly say that I found this story much easier to enjoy. I’ve also accepted that there are going to be over the top names as we go along…we started with ‘God’ and now we’re adding the bounty hunter ‘Judge’ and his dog, the Great Dane…’Book’em and yes, as someone who’s old enough to remember ‘Hawaii 5-0’ every time I read ‘Book ‘em’ my brain added ‘Danno’…seriously it’s like an auto-reflex reaction…I couldn’t stop so I just kind of rolled. Let me just add I’ve read a lot of other books with strange/weird/giggle worthy names so for me this is just a bit of entertainment and really has no bearing on my rating.


So far it’s a bit of a toss up on whether I like this book or the last one better, so we’re going to call it a draw. While Judge is a new character for this series, we have met Michaels in previous stories as part of God and Day’s task force. What we didn’t see was that Michaels is a man with serious anger issues…like, really serious anger issues, and I have to say that was a little worrisome for me because anger issues + weapons = not good…in the real world but here in God & Days world…not a problem; it’s nothing that some hot, steamy, hard and fast sex won’t fix…and thankfully, Judge is just the man for the task. This probably wouldn’t have worked for me at all…except we also get moments of Michaels and Judge interacting and getting to know each other as people in a work environment, as individuals and yes…in the bedroom…just like a relationship in the real world…well, sort of.
Just like in previous stories these men are larger than life with personalities that are for want of a better term…blown out of proportion, and I may not want this…well, actually I know I don’t want this in every story, but sometimes it’s fun and entertaining to read/listen to a story where the real world is only a vague role model…a starting point if you will for what happens on the pages of the story and not something that’s reflective of what’s outside our front door or how we wish the world worked…just some entertaining fun something to distract us from the real world for a few hours.
*************************


An audio book of ‘Don’t Judge’ was graciously provided by the publisher in exchange for an honest review.