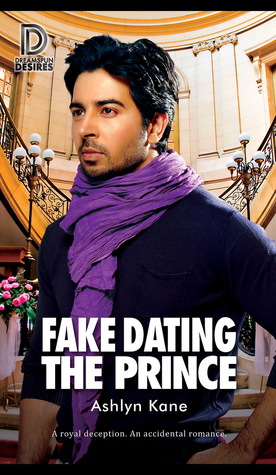 A royal deception. An accidental romance.


When fast-living flight attendant Brayden Wood agrees to accompany a first-class passenger to a swanky charity ball, he discovers his date—“Call me Flip”—is actually His Royal Highness Prince Antoine-Philipe. And he wants Brayden to pretend to be his boyfriend. Being Europe’s only prince of Indian descent—and its only openly gay one—has led Flip to select “appropriate” men first and worry about attraction later.


Still, flirty, irreverent Brayden captivates him right away, and Flip needs a date to survive the ball without being match-made. Before Flip can pursue Brayden in earnest, the paparazzi forces his hand, and the charade is extended for the remainder of Brayden’s vacation.


Posh, gorgeous, thoughtful Prince Flip is way out of Brayden’s league. If Brayden survives three weeks of platonically sharing a bed with him during the romantic holiday season, going home afterward might break his heart….

I quite enjoyed this book. It's a fairy-tale romance, really, in which a real-life crown prince falls for a first-class flight attendant, who plays his fake boyfriend and then becomes his real boyfriend.

Brayden is the flight attendant, hailing from Canada, and has been happily serving Flip in first class on his regular Toronto-Paris route for some time. He's looking forward to his upcoming vacation in Lyngria (tiny made-up country), which he'll start once they get to Paris.

Flip, the crown prince, is intrigued by Brayden and decides to invite him to be his plus-one at the upcoming Lyngria charity ball, in order to avoid any match-making attempts by his parents. Brayden agrees, and we're off...


I really liked the look into the real life of a real life prince (yes, yes, I know this is made-up) and was impressed by how normal these people are (written). Flip's mother, the Queen, married Flip's father who at the time was a Bollywood actor, which surely was quite the scandal at the time. The royal couple treat Brayden nicely, and while Brayden starts to feel a little guilty for the deception, he also starts to fall for Flip. And vice versa.

They produce quite the heat between the sheets, and things go from fake to real in no time at all. They spend lots of time together, they learn about each other, and things get intense quickly.

Brayden has some hang-ups that need to be resolved before their romance can become their HEA. I would have liked to better understand why Brayden had those hang-ups in the first place.

Obviously, this being a romance, the HEA does happen, as expected, even if feelings get hurt and there's a short time in which... nah, you read this for yourself.

The author did a fine job with the fake-boyfriend trope, and this being a Dreamspun Desires title, the backdrop is grand and rich, with the writing style being a nice fit for the setting.

Yeah, I quite enjoyed it. I think you will too.