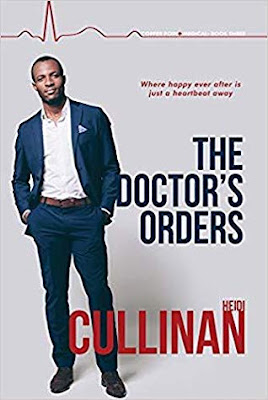 
Once upon a time Nicholas Beckert was the boy who stole kisses from Jared Kumpel beneath the bleachers. Now Jared’s a pediatrician and Nick is the hospital CEO who won’t glance his way. But everything changes when they’re stranded alone in a hospital elevator. Ten years of cold shoulders melt away, and old passions rekindle into hot flames. Once out of the elevator, Jared has no intention of letting Nick get away. He wants a full, open relationship, which is a step further than Nick is willing to go, and it looks like the same arguments that drove them apart in high school might resurface. Jared’s determined not to let it happen again. He won’t order Nick from his shell—he’ll listen to what he needs to feel safe. Maybe this time he can prescribe his lover a happily ever after.

This book felt more political to me than the first two Copper Point stories. An undercurrent of homophobia and racism permeates the plot.

Nick has always hidden his sexuality. As head of his family and hospital CEO, Nick carries the weight of the world on his shoulders. His church teaches that homosexuality is a sin, and his beloved grandma and mom, while generally accepting of the gay couples in Copper Point, feel that one of their own being gay would bring shame upon the family.

Jared is the happy, go-lucky pediatrician, but his cheerful demeanor hides a deep-seated loneliness. Since his friends moved out, Jared has felt unsettled. He's still carrying a torch for his first love: none other than Nicolas Beckert.

The former lovers reunite when they are trapped together after the hospital elevator they're on falls. As the fire department comes to the rescue, Jared and Nick, feeling like their lives are on the line, reconnect with a searing kiss. The problem, of course, is that Nick doesn't want to come out, and Jared won't push Nick, not again.

I had a hard time understanding Nick's refusal to live for himself. He still lives with his family, still does their bidding, still pretends to date women. He's stressed and unhappy, but he's certain he would lose all credibility and respect if he ever came out. Granted, he's not entirely wrong, particularly since as a black man, Nick has to work much harder to earn that respect.

Even so, Nick waffles for too long, and Nick's mom and grandma, whom I liked so much in the other books, disappointed me here. Thank god for Nick's sister, Emmanuella, who stands by his side and gives him excellent advice (I was silently screaming, Listen to your sister, Nick. She knows what she's talking about!).

I liked Jared a great deal and admired his fortitude, particularly when he stands up to his racists parents. Jared tries so hard to be the perfect boyfriend for Nick.

There is more steam in this book than the first two. I complained that the steam in the second book was MIA, and that is, hallelujah!, not the case here.

The plot focuses on the elevator incident, which was almost certainly not an accident. The hospital hires a private investigative firm that believes the elevator was tampered with.

At times, the politics here were heavy-handed, but that's nothing new for Heidi Cullinan. She makes it a point to write about the issues she cares about, and some of her stories fall just on this side of preachy. I usually don't mind, but something about The Doctor's Orders rubbed me the wrong way and I found I didn't enjoy it as much as the two previous books.

Fortunately, the ending saves the day with a parade, matching bow ties, and one spectacular magic trick. I find the epilogues in this series to be very fulfilling (if predictable), and this one is no exception.