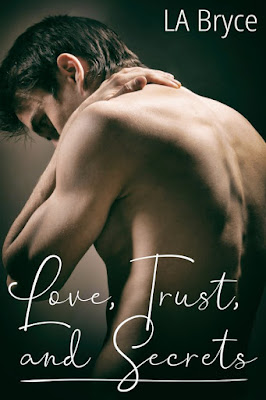 Even though a bad situation brings Tyler and Jarod together, they quickly find the good in their relationship. But when Tyler falls in love and finds the feelings returned, he’s forced to question if his and Jarod’s relationship is worth risking his freedom, his life, and their hearts.

Jarod knows Tyler is hiding something, but his fear of scaring Tyler away has him accepting Tyler’s silence. But instead of keeping Tyler close, Jarod’s avoidance ultimately leads to Tyler being taken away, leaving Jarod clueless and unable to help the man he loves.

Love, Trust, and Secrets is a story whose main focus is the love between two men and all the trial and tribulations that come with that love.

Jarod loosened his too-tight grip on the steering wheel, and shut off his truck. His eyes focused on the blaring blue sign in front of him. Briefly, he thought about heading home, but he didn’t think the few beers he had in his refrigerator would be enough to get him through the night. Not the way he felt. Then he’d also have to deal with being alone. Alone with his thoughts.

With renewed determination, he took a deep breath, jumped out of his truck, and slammed the door.

As he moved closer to the bar entrance, the noise from inside invaded the silence. That, along with a few drinks, would hopefully be enough to numb his brain.

At the entrance, he spotted three twinks, not looking old enough to frequent the bar, hanging all over two solidly built tattooed bouncers. Their gazes and hands roamed all over the big men’s bodies, as if in the midst of foreplay.

Jarod’s cock twitched, and his heart beat faster. Any eye contact would signal his willingness to join in. Another night and he’d jump right in the middle. This night, he strutted with purpose past the stunning group, with his focus on the door.

Inside, the warmth of bodies surrounded him, and the bass of the music pounded through his body. Unfortunately, the combination wasn’t enough to clear his mind.

Not paying attention to his surroundings, Jarod stumbled into two men holding each other and moving slow next to the dance floor. “Sorry,” he mumbled as he pushed by. Once out of their way, Jarod stopped moving. His throat constricted, and he had to make a conscious effort to breathe. It almost felt as if a piece of him had died. Again, his patient’s family invaded his headspace.

Dammit. He fisted his hands as his muscles tensed. He took a deep breath and willed his mind and body to relax. Time to let go and move on. And that’s exactly what he planned to do, with a Jack and cola, or better yet, a bottle of Jack and cola.

The cloud of smoke billowing off the dance floor, combined with the dim lights, made it hard to find a spot to settle. About to head toward a table, Jarod noticed an opening at the bar. He pressed through sweaty bodies, en route to it, and made it to the bar just as another guy tried to move in. The guy muttered a curse, and Jarod offered a sympathetic smile. Again, he could’ve offered to buy the guy a drink—he looked hot and definitely doable—but Jarod needed to put a little liquid relaxation in his body before starting any conversations.

Jarod waved to the bartender just as something hit his side, causing him to turn around. Dark eyes, wide open and full of fear, met his. Ready to ignore the guy, Jarod glanced back at the bartender. The man sitting next to him grabbed Jarod’s arm with shaky hands. Jarod turned again, this time noticing the guy’s pale complexion, dilated pupils, and the pulse in his neck beating erratically. Jarod stopped and watched him.

“He put something in my drink. Please, help me.”

Jarod stared at the guy. It took him a moment to register what the guy had said and understand what he’d meant.

Another man walking up behind them—the man who’d moments ago vacated the spot where Jarod now stood, the man who now glared at Jarod with hate in his gaze and a sleazy smile on his face—confirmed Jarod had heard the guy sitting in front of him right.

“Tyler, come on, we’re getting the fuck out of here.” The man’s voice sent chills down Jarod’s back and caused the frightened man’s eyes to open wider.

The other guy’s increased fear pushed Jarod into action. Before Jarod thought through what he would do, he found himself smiling at the man he now knew to be Tyler. His features relaxed. Jarod took that as acceptance and threw away all rational thought.

He put his hands on Tyler’s thighs. “Tyler, sorry I’m late.” He rubbed up and down the man’s legs, grateful not to encounter any flying fists or beer bottles hitting his head when he did it. “Got stuck on my way over. There was an accident on four-ninety-five. Had to stick around until the cops came to take my statement.”

Out of his peripheral vision, Jarod could see a mask of anger come across the sleaze’s face, and with renewed inspiration, Jarod leaned in. This is it. He put his lips on Tyler’s forehead. From there, he moved to one cheek, then the other. So far, so good. His heart beating out of his chest, Jarod headed for Tyler’s lips. About to make contact, Jarod froze.

Tyler’s hands, no longer shaking, framed Jarod’s face. Jarod brushed off his surprise, and continued to move toward his target. The softness of the man’s lips, surrounded by the slight roughness of leftover beard growth, did more to Jarod than it should have. His tongue begged for freedom, and his cock followed closely behind with the same request. Down boy. Before he was ready to, Jarod pulled back.

The smile on Tyler’s face told him he’d done the right thing. And the rage on the other guy’s face, before he stormed toward the exit, confirmed it.

Adrenalin pumped through Jarod’s body. He needed to know what’d just happened. He was about to ask when he noticed Tyler with his head down, resting on his crossed arms.

I've been telling stories for as long as I can remember; my parents tell me it's been going on even further back than that and not always at the appropriate times. Now I choose to use my gift for good.

I enjoy meeting new people, even if they're only in my head.

I believe love comes in all different packages and each should be wrapped in a ribbon and cherished.

I'm currently working on a contemporary romance with a splash of suspense. I get a thrill coming up with unexpected and usually dangerous situations for my characters to be in and then thinking of extraordinary ways for them to escape with outcomes that deviate from the expected.

I live with my family in the Northeast where we enjoy white winters, balmy summers, a spring flurried with fragrant flowers, and a fall filled with piles of leaves to dive in to. Our small town offers the old world charm of knowing your neighbor and its location enables us to take off for dinner in a city known for its beautiful skyline or to an afternoon playing in the sand of some of the best beaches found in the United States.

For me, writing is relaxation for the soul and reading is its nourishment.