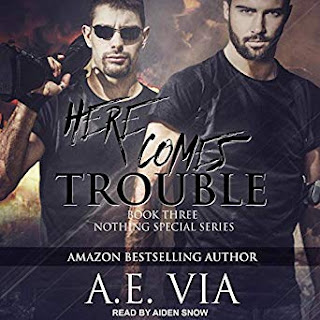 Detectives Mark Ruxsberg and Chris Green are very good at their jobs. Being the enforcers for God and Day's notorious Atlanta PD Narcotics Task Force causes the crazy duo to get into more trouble than they can often get out of. The pair never misses out on an opportunity to drive their lieutenants crazy with their dangerous, reckless, and costly stunts, landing them in the hot seat in front of God...often.
Ruxs and Green love their jobs and they don't mind the very demanding schedule that leaves them little time for socializing or dating. It's fine with them, they enjoy hanging out with each other anyway.

However, most of the men in their close circle of friends and colleagues are pairing off and settling down. God has Day, Ro has Johnson, and their Sergeant Syn has Furious.
For the past several years, Ruxs has only sought out the advice and company of one person, his partner and best friend Green, and vice versa. Both of these alpha males are presumed straight, but neither can deny the heat that's building in their once-"just friends" relationship.

The men of the Atlanta PD Narcotics Task Force are back…
Book one of this series was about God and Day and in book number two we watched Sin and Furi fall in love but here in ‘Here Comes Trouble’ it’s Ruxs and Green the enforcers for the ‘Atlanta PD Narcotics Task Force’ they’re the men who hit the streets frequently at considerable expense to the task force budget and gather information for the task force that allows them to do their job. While both of these characters have appeared in previous stories, their presence has been minor, but in this story, they are the central characters and we get to find out a whole lot more about both of these men and their relationship to each other than as work partners.
Detective Mark Ruxsberg and Chris Green are partners at work and best friends…Chris is bi and while he’s not in the closet, he’s also not taking out any ads in the local paper. He hasn’t even bothered to tell his partner and best friend…the same partner and best friends who’s starting to wonder about things…things like what it would be like to kiss Ruxs…to maybe  pin him up against a wall and do things…things that definitely take their relationship beyond the strictly platonic. What Ruxs doesn’t realize is that Greens been having those same thoughts about him for a whole lot longer and while it’s slippery slope that these men find themselves on as they go from friends to lovers their equally determined not to lose their friendship along the way.


Threaded throughout this budding romance we have plans for a drug bust…because hello! Narcotics Task Force and the drama of Ruxs mother…seriously I’m so with Green about this woman…I have zero compassion for her…sorry…not sorry and last but not least we have Curtis the  young man that we met in the first book when God and Day stopped him from robbing a convenience store. Curtis is definitely more present in this story and while I would have liked to see his character better defined, he’s got potential and hopefully if he continues to appear in future stories we’ll see him gain a more cohesive personality that presents a clearer image of who he is but I definitely enjoyed the interaction between Ruxs and Green both as friends and as lovers as they worked together along with the rest of their team to create a family for Curtis.
In spite of the fac that I do think it’s happened a little too quickly, even for people their age…I’m ok with the idea of Curtis and Genesis as a couple. I admit it’s been a few years but I do remember how easy it is to feel like you’re in love when you’re their age but I’m hoping that the future brings more character and relationship growth for both of these young men before we see them actually settled into a committed relationship and truthfully for me this is something that’s ok as a sidebar in future stories but  I’m hoping the stories stay focused on the members of the Atlanta PD Narcotics Task Force.
And once again it’s the talented narrations of Aiden Snow that has not only brought this story to life but provided me with the voices that I have come to associate with this group of men. ‘Don’t Judge’ was the first book in this series and my first time listening to this narrator but here we are at ‘Here Comes Trouble’ book number three and with each book I’m enjoying this narrator more and more. While most of his audio books to date are m/f stories I’m certainly going to be keeping an eye out for future audio books in the m/m genre by this narrator. But in the meantime, there’s always ‘Don’t Judge’ the next book in the A.E. Via’s ‘Nothing Special’ series to be enjoyed.
*************************


An audio book of ‘Here Comes Trouble’ was graciously provided by the author in exchange for an honest review.