Audio Review: Fish Out of Water #4 - Hiding the Moon by Amy Lane 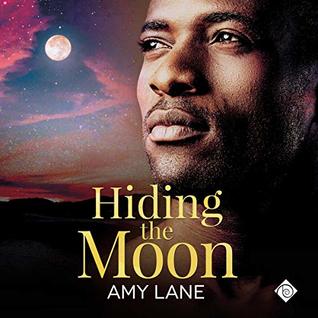 A Fish Out of Water/Racing for the Sun Crossover

I admit it, if I love a book and you dangle the audio book in front of me...well, it's like putting something shiny in front of an magpie and I am all grabby hands and gimme'. So that explains why I'm once again reviewing an audio book of a book that I've read and I have no remorse about this because history has shown that the odds are in my favor that I'm going to enjoy the audio as much or more than I enjoyed reading the book.

So once again I'm going to borrow from my original review and add a few thoughts about the audio and creating an updated review.

We first met Lee Burton (Burt) in 'Racing for the Sun' when he came to the aid of Sonny and Ace finding not only men in need of his help but friends who would offer him a safe place to go when he needed it for himself or for a rather unusual young man with a talent for knowing things that he shouldn't and for being a diversion that Lee finds he can't live without.

It's not until 'A Few Good Fish' that we meet Ernie. When Burt is given the task of 'taking out' Ernie. He sees someone who is not a threat to national security or a terrorist of any kind but a young man who makes him want and distracts him but Burt tries to convince himself that he needs to walk away from Ernie but the heart wants what the heart wants and for Burt his heart wants Ernie.


While much of 'Hiding the Moon' takes place during the the same time frame as events from 'A Few Good Fish'. It's not Jackson and Ellery's lives or perspective that we're following and it's not until later in the story that Jackson and Ellery become a more direct part of events but even then for me Ernie and Burt were still the main focus of what was happening.

I have to admit I'm not a huge fan of stories that are retold from a different perspective; quite honestly I find them to be boring and repetitive more often than not. That was not the case for me with this story and I think that one of the main reasons for this is that 'Hiding the Moon' isn't about retracing the actions of Jackson and Ellery but finding out what others were doing at that time...specifically Burt and Ernie with a bit of Sonny and Ace thrown in since they also play a role in both of the books that I've mentioned.

I liked Burt in 'Racing for the Sun' and was pleasantly surprised to see him resurface in 'A Few Good Fish' but here in 'Hiding the Moon' seeing Burt and Ernie's relationship as it evolves has been absolutely delightful. I loved having a closer look at how these two met and their lives came to be tangled together.

Ernie may seem like someone who's partying their way through life with drugs and too much sex but he's so much more. Ernie's what some people would call gifted and when his gift gets noticed by the wrong people...his life is no longer his own. And it's only through a streak of luck that Burt is the one who is given the assignment to terminate Ernie.


While I enjoyed the additional perspective into the events from 'A Few Good Fish' for me the best part was seeing Burt and Ernie's relationship grow from their first meeting and their interactions. On one hand we have Lee Burton by the book, black ops, military man, solid, dependable, a good man who's job is something bigger and then we have Ernie gifted with psychic abilities, so much more self sufficient than he seems, strong in ways that are less obvious than Burt's strength but someone who's lonely and wants nothing more than to have a family to call his own.

While 'The Fish Out of Water' series is narrated by Greg Tremblay who does a superb job of things...by the way, 'Racing the Sun' and 'Hiding the Moon' are both narrated by Nick J. Russo who also coincidentally does a superb job which explains why this one went from an awesome 4 stars to a totally over the moon 5 stars.

'Fish Out of Water/Racing the Sun' are definitely a favorite of mine and while they're listed as two separate series the events and characters are so intertwined that for me they might as well just be one big happy series. I enjoyed revisiting this story from a different perspective and I loved Burt and Ernie as individuals and as a couple they were delightful. My one niggle here is that I still want more Burt and Ernie (yes, I do love that they're called Burt and Ernie). I'd love a story that gave us more about their life maybe picking up where this story leaves off...it's just a wish I have.

An audio book of 'Hiding the Moon' was graciously provided by the publisher in exchange for an honest review.