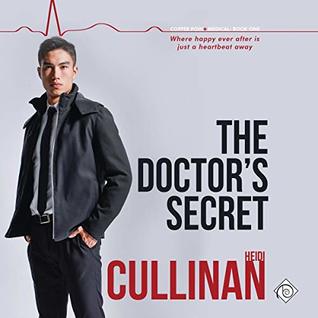 
The brilliant but brooding new doctor encounters Copper Point's sunny nurse-next-door... and nothing can stand in the way of this romance.

When Copper Point's one and only surgical nurse Simon gets talked into picking up Dr. (Jack) Hong-Wei Wu the newest addition to the hospital's staff, the last thing he's expecting is that he's also picking up the newest complication in his life.

Simon's lived in Copper Point all his life only leaving to complete his education and then returning to work in the local hospital alongside Owen and Jared, his current roommates and best friends.

While this didn't turn out to be one of my favorite Heidi Cullinan stories it was still a really enjoyable listening experience and not just because of the solid narration provided by Iggy Toma.

This is only my fourth time listening to an audio book narrated by Iggy Toma and while I'm not sure that I'd say I've warmed up to this narrator quite as much as some others I can also say I've not been disappointed by him and listening to books that he's narrated is by no means a hardship.


I liked Simon with his sweet helpful ways. He was for me the kind of person who should be a nurse being caring and kind was a natural instinct for him and not something that he needed to think about and his passion for Asian pop culture was simply adorable.

Dr. Wu was attracted to Simon the minute he laid eyes on him and every time Simon opened his mouth to speak he fell under Simon's spell a little bit more and yet in spit of this their's was not a case of insta-love and these two men took time to get to know each other and develop a friendship that just naturally progressed into love.

While Simon wants to stay in the closet in order to keep his job. Dr. Wu is determined to see where things go with him and Simon and without having it cost Simon his job. The biggest drama in Simon and Jack's relationship is the hospital's 'no fraternizing' policy that sees employee's fired as soon as a transgression occurs...which, really? In a small town, and this is a small town, it's like asking for a staffing shortage. Sadly the stringent enforcement of this rule was a very real fear for Simon to have. But what Simon doesn't realize is that when you live in a small town like this and you work in an environment such as a hospital people become a very close knit group...almost like family and when things get tough...well, family true family always has your back.

I enjoyed Simon and Jack's story and I'm looking forward to seeing more of them as the series continues and we get Owen and Jared's stories...what can I say this is the beauty of audio books they come out after a book is written and the reader/listener gets to know what's coming next.