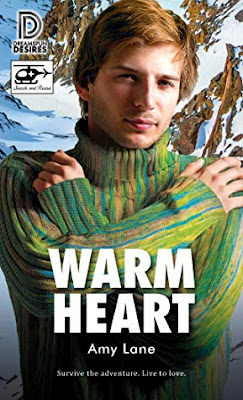 
Survive the adventure. Live to love.

Following a family emergency, snowboarder Tevyn Moore and financier Mallory Armstrong leave Donner Pass in a blizzard… and barely survive the helicopter crash that follows. Stranded with few supplies and no shelter, Tevyn and Mallory—and their injured pilot—are forced to rely on each other.

The mountain leaves no room for evasion, and Tevyn and Mal must confront the feelings that have been brewing between them for the past five years. Mallory has seen Tevyn through injury and victory. Can Tevyn see that Mallory's love is real?

Mallory’s job is risk assessment. Tevyn's job is full-on risk. But to stay alive, Mallory needs to take some gambles and Tevyn needs to have faith in someone besides himself. Can the bond they discover on the mountain see them to rescue and beyond?

When I met Amy Lane a few years back, I told her that one of her recent books had shattered my heart into a thousand pieces. She looked at me and said, "That book wasn't Dani approved." So you see, I am allowed to read only Amy Lane Lite, Amy's lighter stories without the full-on pain and angst.

Which is not to say Warm Heart is all kittens and rainbows, because it's not. This book is about surviving: surviving in a blizzard on a mountain top, surviving the death of a loved one, surviving long enough to get your wounded friend to safety, surviving for five years while the love of your life goes through hook-ups like socks.

Tevyn is an Olympic snowboarder. Mallory is his financial adviser. Mallory rarely misses one of Tevyn's competitions. He claims he's just doing his job, but he clearly goes above and beyond for his favorite client. Mal likes to watch Tevyn fly.

Tevyn—a decade Mal's junior, free-spirited, charming, impulsive—knows he can count on Mal; he's just waiting for Mal to catch up.

Tevyn nodded. "If there's breath in my body, I'll always fly down the mountain for you."


One night Mal gives in and dances with Tevyn. The timing isn't great though, because Mal arrives bearing sad news: Tevyn's grandmother, the woman who raised him, is dying. Tevyn and Mal, along with their pilot and friend Damien, take off in a helicopter during a blizzard, and the unthinkable happens.

The first 60 percent of the story is set during a blizzard with the three men trying to survive. The weather may be freezing, but things between Tevyn and Mal heat up quickly, as the two finally (finally!) give into their feelings and kiss.

I appreciated the slower pacing of the story because it gave me a chance to see not only how Tevyn and Mal are together but how they deal with the curveballs life may throw their way (and nearly dying in a helicopter crash is one hell of a curveball!).

Hurt/comfort is the predominant theme in the story, but there's a focus on family and friendship and dogs. Damien is basically the third MC in the first half of the book, not that I minded, because he is amazing, and I can't wait for his story next.

I'm less in love with Charlie, Mal's friend and business partner. I didn't care for her attitude toward Tevyn. I know she was just protecting Mal, but Mal's a grownass man and didn't need protecting from the love of his life.

The epilogue is all kinds of sweetness, what with hand-knitted sweaters, dog kisses, and promises of forever.

This series is gonna kill me, but what a way to go.