ARC Review: How to Run with the Wolves (Howl at the Moon 5) by Eli Easton 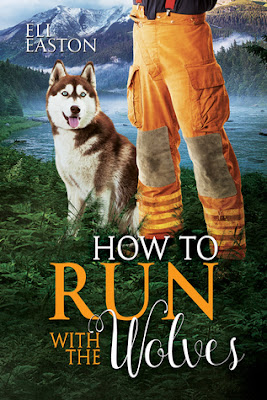 
Zeus loves his job on the new Mad Creek Search & Rescue team, and his inner Saint Bernard is finally being used to his full potential. When he sees a mysterious and wild-looking quickened—a dog shifter—at an earthquake site in Alaska, Zeus is compelled to investigate. Zeus falls hard for the primal beauty of Timo and of Alaska itself. Both call to his deep canine soul. But the Quimmiq pack’s laws are as harsh as the Alaskan winters, and Timo is out of his reach.

Timo’s pack of dog shifters left their Inuit village generations ago and have lived wild ever since. Not trusting the “one-skinned,” and with their numbers dwindling, the Quimmiq are on the verge of extinction. Timo is shocked to discover a whole group of “two-skinned” working as a rescue team, and he is particularly fascinated by Zeus, a gentle giant. He senses what Zeus feels for him… but it’s forbidden.

I can't with how amazing this book is. I did not want it to end. I love this dog-human world Eli Easton has created, and I'm here to say: she can do no wrong.


Timo, whose dog is a husky, wants a lot of things. He wants his sister Hitty, born small and sickly, to get better. He wants his brother Yuki, the pack alpha, to put his trust in Timo. He wants his two-skin (human and dog) tribe, the Qimmig of Alaska, to survive even as their numbers dwindle.

But most of all Timo wants Zeus.

Zeus is a St. Bernard, a big, gentle giant. He speaks softly and is kind to his very core. He volunteers on Mad Creek's Search and Rescue team and travels to Alaska to help find survivors following an earthquake.

And in Alaska, Zeus sees Timo.

Timo is all self-assured confidence, which borders on arrogance. Timo is smart, and Timo likes to have his own way. But his heart is in the right place. Timo doesn't understand why he's so drawn to Zeus, why his dog needs Zeus, why it feels so good to cuddle together and touch.

I loved how organically their relationship develops, how they complement each other in every way. Timo wants to lead, and Zeus has no problem giving up control. Zeus never felt like he belonged until he ran free with Timo in the wilds of Alaska.

I adored the Alaskan setting and literally SOBBED when I read that Eli Easton is writing a new quicken series (a spin-off from Howl at the Moon) set in Alaska.

In How to Run with the Wolves, we revisit with all four Howl at the Moon couples. We see Matt lead the rescue team, Roman be all protective, Milo offer comfort, Sammy be kind and intuitive, and Jason be ... well, JASON: serious and intense.

It's Jason who figures out how to help the Qimmig, and it’s all about genetic diversity, baby.

The secondary characters are wonderful: Hitty who’s so strong despite having a body that’s giving up on her; Yuki, who never falters in his faith for his tribe; Zeus’s parents who fall in love with Hitty and take both Hitty and Timo under their wing. Also, Simon, the hyper Jack Russell terrier, is back and all gaga over Hitty! So damn cute!

There are a couple of very sexy scenes between Zeus and Timo, and Timo definitely knows how to take charge. I always love it when the bigger guy gives up control. The slow burn was perfect.

There isn’t a single thing I didn’t love about this story: the setting (because ALASKA); the MCs (whose voices sound so distinct: Timo’s, simpler, direct, spontaneous, untamed; Zeus’s, careful, measured, solid, thoughtful), the relationship (which has a defining turning point when Zeus shares his feelings with Timo, and Timo freaks out and runs away).

I have so many favorite moments, it’s hard to pick one, but a couple standout: Timo and Zeus meeting the wolf pack and Timo having Milo send numerous texts to Zeus asking him everything but to come home. And the question he asks himself about phones: ICONIC. (Come on, we've all wondered this very same thing!)

But Zeus did not come home, no matter how many text messages Timo had Milo send. And if Zeus could ignore the messages, what was the point of stupid phones?