Blogtour: A Dom And His Gentleman by Xenia Melzer

A Dom And His Gentleman 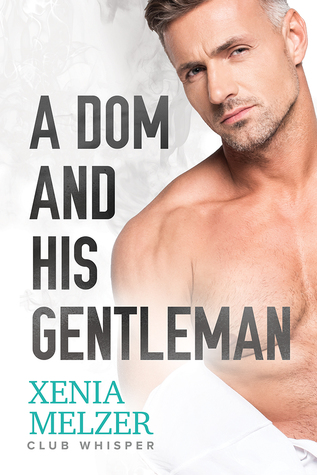 Silver fox Curtis is everything baker Andrew could want in a sub, and their chemistry is off the charts. But as a wealthy and successful gallery owner, Curtis intimidates Andrew and challenges his dominant nature. Can Andrew get used to a sub with a much higher social status?

British noble Curtis Morris has all but given up on finding his perfect Dom when he walks into a bakery and meets Andrew Granger—smoldering hot, new to Miami, into the lifestyle, and with kinks that align perfectly with Curtis’s own.

Andrew grew up poor and doesn’t know if he can handle a sub with so much more money, even if he’s insanely attracted to Curtis. To make matters worse, Curtis’s preferred club, Whisper, is far beyond Andrew’s financial means. Still, Andrew doesn’t want to lose Curtis to his own hang-ups, not when Curtis is far from the elitist snob Andrew expected. But Andrew keeps messing up, and with Curtis’s rich ex visiting with the hopes of winning him back, he and Curtis will need all the help they can get to make their romance of opposites work out.

As part of this tour, the author has written a free short story called 'Baking Macarons", in four parts. Click the links below for the first three pieces, and enjoy the final part here.


Part I: Long And Short Reviews


“Boys, let’s get on. We’re running out of time.” Curtis pointed at his watch. “If we want to be done before Martin and Richard come here, we need to hurry a bit.”
With that, he took the icing tip from Dean and held it open. “Now fill some of the slug-dough in,” he said, winking at Dean who started laughing the same time Seth made a gagging sound. Leeland stepped forward with a spoon and started shoveling the dripping, gooey mass into the icing tip, managing to leave a generous amount on Curtis’s fingers.
“Be careful, Leeland. We can’t waste any dough.” Collin looked anxious.
“Uhm, guys, should it be leaking like that?” Seth pointed to the tip of the icing tip, where the brown goo was dripping out almost as fast as Leeland was putting it in. Dean furrowed his brows and checked the recipe.
“It doesn’t say here. Perhaps we have to block the tip? Collin, could you do that?”
Collin nodded eagerly before placing his thumb at the opening of the tip, keeping the dough from leaking out.
When the icing tip was about two thirds full, Curtis made the three steps over to the griddle, with Collin still preventing the dough from escaping.
“It says we have to make small dots with about a thumb’s breadth between.” Dean looked up. “Seth, your thumb is unused at the moment.”
Grumbling, Seth stepped closer to the counter with the griddle, looking at Curtis. “I’m ready when you are.”
Curtis nodded. “Collin, you can let go now.” Collin pulled his thumb away and was immediately attacked by Dog who went on his hind legs and started licking the digit enthusiastically. Collin giggled happily.
Dean watched as Curtis tried to make blobs with the right spacing which didn’t work out quite right.
“You need to move faster,” Leeland said, eyeing the griddle critically. “I think the dough is too liquid. And this doesn’t look like little dots, more like full grown blotches.”
“You can always take over and show us how it’s done,” Seth snapped, trying to lick some of the dough from his fingers.
Leeland held up his hands in a placating gesture. “I didn’t mean to criticize. I was just observing.”
“Maybe you could observe somewhere else.” Curtis glared at the blotches on the griddle. “At least they have stopped expanding. Let’s get them in the oven and prepare the second batch.”
Dean nodded and took the griddle while Collin placed the second one in front of Curtis.
Ten minutes later, the boys were staring into the oven with furrowed brows.
“They don’t look like macarons at all.” Collin sounded defeated.
“It’s just one big piece of dough,” Seth observed gloomily.
“Perhaps we can cut it into squares? I don’t care about the form as long as it’s tasty.” Dean was obviously trying to see the light at the end of the tunnel.
“I’m not sure this is going to work. Look, it’s already blackening at the edges and the middle is still bubbling.” Curtis shook his head. “What have we done wrong?”


“I don’t know. I only know we don’t have macarons. Just a mess.” Dean sighed. “Richard will never let me hear the end of this.”
“It’s not fair! We tried so hard and did everything that stupid recipe said. Why couldn’t it work at least a little bit?” Collin stomped his foot. Dog whined and pushed his massive head against Collin’s thigh to offer some comfort. “It’s fine, Dog, not your fault.”
“Well, we can still make the filling. It’s delicious even without the dough. We could put all that chocolate goodness into bowls, get spoons and watch Drag Race.” Seth’s suggestion was met with tentative smiles.
“I guess we could do with some sugar to cheer us up.” Dean looked at the recipe. “The filling sound easier to make. Curtis, can you switch off the oven? We can deal with the dough later. Let’s make this filling and forget about the rest.”
The other men nodded happily, quickly getting all the ingredients for the filling out. Half an hour later they were sitting in front of the TV, putting on Drag Race.
“The filling tastes great!” Collin was sucking on his spoon, his eyes rolled upward in pure bliss. He held his bowl protectively to his chest, keeping it from Dog’s reach.
“At least one part that worked.” Curtis stared into his own bowl of calories waiting to invade his middle section.
“What do we tell our men?” Leeland was already on his second helping, attacking the sweet crème with the same determination he had showed his opponents in the ring.
“Tell us what?” Richard’s deep voice already rumbled with laughter when he and Martin entered the living room.
“I see the kitchen is still standing.” Martin grinned broadly.
“Master!” Collin leaped from where he was sitting, leaving his bowl to Dog who would have emptied it in one go if Seth hadn’t quickly taken it from him. Chocolate and dogs weren’t a good combination. “We made the dough like the recipe said but it didn’t work out and now we have this brick-like things in the oven, though Dean thinks perhaps the birds want it, and I learned how to separate eggs, which is so cool you wouldn’t believe it, and do you know a good recipe for omelet made from yolk, and the egg white had to be all stiff which is totally funny, though Curtis says dating a baker does not make him an expert in the kitchen, and the filling turned out perfect and maybe we just have to keep trying.”
Martin laughed in pure delight and kissed his boy deeply before he turned to the others. “I can see you had fun. Now where is this delicious crème?” Collin took the bowl Seth was holding out to him and presented it to Martin. He dipped a finger in and licked it clean. “Wonderful. You did a great job, baby boy.”
“Hey, we helped, too.” Leeland pouted.
“And if you take some of that crème home to your Dom instead of eating it all, he’ll surely praise you as well.” Richard nudged Leeland’s shoulder in a playful gesture.
“Hmm,” Leeland held up his hands in a weighing gesture. “Praise versus sugar. Praise versus sugar.” His left hand shot up. “Sugar. Who needs praise?” With that he focused on his bowl again.
They all laughed and after some good-natured ribbing from Martin and Richard, the men all settled back around the TV, enjoying the crème and each other’s company while pointedly ignoring the mess in the kitchen. Life was perfect.

I hope you enjoyed this little episode in the life of the men of Club Whisper. Below is the video the boys watched...

When she's not writing, she translates the stories of other authors into German, enjoys riding and running, spending time with her kids, and dancing with her husband. If you want to contact her, please visit either her website or write her an email via info[at]xeniamelzer[dot]com.