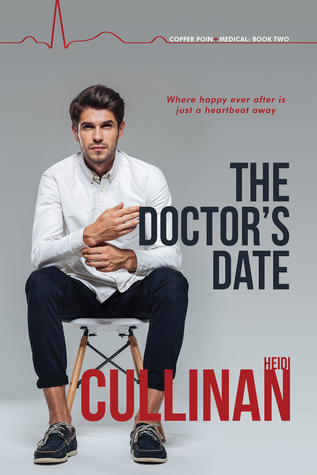 The hospital’s least eligible bachelor and its aloof administrator hate each other… so why are they pretending to date?

With Erin suddenly heading a messy internal investigation, Owen wants to step up and be the hero Erin’s never had. Too bad Erin would rather spend his energy trying to rescue Owen from the shadows of a past he doesn’t talk about.

This relationship may be fake, but the feelings aren’t. Still, what Erin and Owen have won’t last unless they put their respective demons to rest. To do that, they’ll have to do more than work together—they’ll have to trust they can heal each other’s hearts.


Thanks for having me today! I’m here to talk about my new book The Doctor’s Date, available in ebook, trade paper, and mass market from Dreamspinner Press. It’s book two in the Copper Point: Medical series, and it’s the story of Erin Andreas, no-nonsense hospital administrator, and Dr. Owen Andreas, the cantankerous anesthesiologist.
I’m sharing an excerpt from the opening of the story, a sampling from the moments before the bachelor auction where Owen is a reluctant participant. Owen also has to perform in the community quartet, something he wants to do even less. Erin has come up to greet him before the event starts (Erin is managing the fundraiser for the hospital), and he’s surprised to discover Owen has his auction fixed. This is a problem, as Erin had decided he would bid on Owen and win no matter what.
I hope you enjoy this taste of the novel and that you continue your exploration of Copper Point with The Doctor’s Date!

Owen didn’t have patience for people right now. He needed ten precious minutes alone, away, in silence, with the gulls at best for company. As with everything about this event, what he ended up with instead was a shitty compromise, a cramped corner in the dark, sitting on a pile of tarps as he stared at last summer’s community theater backdrops, trying in vain to calm himself.
“Thank you for filling in for the quartet. I know you said this was the one thing you didn’t want to do, and I appreciate the lengths you’ve gone to in order to make this event a success.”
Owen turned toward the intruder’s voice. Erin Andreas stood five feet from him, at the edge of the narrow space Owen had wedged himself into. He appeared prim and crisp as ever in a suit no different from the ones he wore to work, which meant it was completely unflattering and seemed to be sucking out his soul as Owen watched. If it weren’t for Erin’s hair playing about his head in wild tendrils, he’d look as if he’d been pressed from a mold for corporate executives who don’t want to draw attention to themselves.
Had Erin come to fight, Owen might have welcomed him. But Owen didn’t have the strength to start anything, and Erin was never the instigator. In fact, he was too close to that uncomfortably subdued mode from his office again, and Owen was seriously not in the mood for it.
He kicked at a folded-over piece of tarp. “I didn’t do it because I’m a team player. I did it because Simon wouldn’t get off his knees, and Jack swore he’d mortgage his condo to buy my date as payback if he had to.”
“He—what?” Erin came around to stand in front of Owen. He looked like someone had punched him in the gut. “You… you did… what?”

Owen shot a withering glance at Erin. “Don’t go high and mighty because we fixed my results. It’s not as if anyone was going to bid on me anyway. The worst-case scenario is someone’s revenge plot gets foiled, Jack’s out some fun money, and the hospital gets the funds it needs for the cardiac unit. And I get left alone. Which, speaking of, I’m sure you have somewhere else to be.”
Erin only stared at Owen, dumbfounded. Hell, he almost looked hurt, which made no sense whatsoever. Unbidden, Owen remembered Erin in the hospital stairwell, so lost and alone.
No. He seized his bleeding heart with both hands and tossed it as far as he could.
Erin made his own recovery, whatever emotions he’d been experiencing neatly packed away as he smoothed his hands over his clothes. “I’ll be going, then.” Except as he left, he stopped near the stage door. “You sounded as good as I remember, by the way.”
As soon as the door closed, Owen kicked the curtain, though without any strength. He clung to himself, weak and turned inside out. Goddamn compliments. The words were barbs, hooked into him and digging, not letting go.
You sounded as good as I remember.
Shutting his eyes, Owen hugged himself tighter and spiraled into the nightmare of his own mind.

Also check out the Spotify playlist for this book.