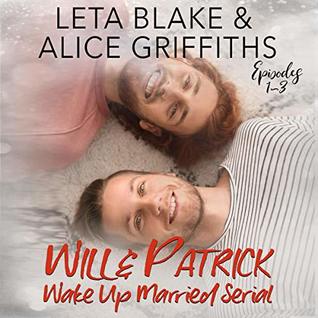 
Join the fun in this soapy serial by best-selling author Leta Blake and newcomer Alice Griffiths!

Episode One: Will & Patrick Wake Up Married

After a drunken night of hot sex in Vegas, strangers Will Patterson and Dr. Patrick McCloud wake up married. A quickie divorce is the most obvious way out—unless you’re the heir of a staunchly Catholic mafia boss with a draconian position on the sanctity of marriage. Throw their simmering attraction into the mix and all bets are off!

Meeting the family is challenging for every new couple. But for Will and Patrick, the awkward family moments only grow more hilarious--and painful--when they must hide the truth of their predicament from the people they care about most. Throw in the sexual tension flaring between them and you've got a recipe for madcap laughs and surprisingly heartwarming feels.

Episode Three: Will & Patrick Do the Holidays

A couple’s first holiday season is always a special time. Thanksgiving, Christmas, and New Year’s Eve are magical when you’re in love. Too bad Will and Patrick’s marriage is a sham and they’re only faking their affection for each other. Or are they? Sparks fly in this episode of the Wake Up Married serial. Will the sexual tension between Will and Patrick finally explode in a needy night of passion? Or will they continue to deny their feelings?

I've been wanting to read this one for quite a while now...and happily I finally got the opportunity to check out the first 3  Will & Patrick stories on audio.

I have to admit I was expecting something that had more of a comedic bent to it...please don't misunderstand me, there are some humorous moments to be enjoyed in these stories, but there's also some serious stuff going down as well.

This one presents a bit of a challenge for me when it comes to how to do my review so I'm going to start with things that are common to all 3 stories in this collection, so let's start with the narrator...John Solo.

This is by no means my first John Solo audio book. Nope, this is somewhere around #10 for this narrator and I and while I enjoyed the narration there was as always for me one little niggle...children's voices...I know, I know I sound like a stuck record but it is what it is and while there wasn't a lot there were children's voices involved and sorry to say...the kids voices just weren't working for me which is why at the end of it it's only 4 stars for the narration...sorry, but it is what it is and as for the adult voices I think Will and Patrick's voices were two of Mr. Solo's better characterizations.


Now as for the story let's talk about Will's ex...Ryan. Ok, I can't lie I'm not going to talk about Ryan...I'm going to rant!!! Seriously RANT!!! Because for the life of me, I cannot understand why anyone much less everyone one, except Patrick, thought Ryan was the second coming of you know who!!! The guy was such a freakin' useless PoS!!! I couldn't stand him and the fact that Will's mother and his Uncle both thought he was just so perfect and amazing made me want to wretch and then smack them both upside the head. If my son brought someone like him home to meet me, I would flip my sh*t!!! Ok, so in case you missed it I disliked Ryan with a passion!  #teamPatrickonthisone!

Now let's talk about Patrick. I liked him yes at times he was a bit to abrupt and seemed to be missing some of his basic good social skills filters...still, I'm rather someone who speaks their mind honestly than someone...like...well, someone like Ryan.

Last but not least a little bit about Will...overall I liked Will. He was sweet and trying so hard to do what was right for everyone except maybe himself. When it came to Will's family the only thing I can say is..."I'm sorry....like seriously sorry!"

Will & Patrick Wake Up Married...is the first story in this series and honestly the title says it all. I know they say that what happens in Vegas stays in Vegas....well, that's only if you didn't marry what happened in Vegas, which is what happened to Will and Patrick. When Will falls of the wagon resulting in a night of drunken debauchery the two men wake up to find that somewhere in their escapades they got married and as is often the case it's going to take more than a few minutes to undo what it took mere minutes to do.

This one got 3 stars from me because the premise intrigued me and there were definitely parts of it that I liked but at the same time things occasionally started to feel a little more convoluted than I would have liked...things like the issue between Patrick and his employer (now former employer) but still there were some good moments...like pretty much any conversation that Will and Patrick had.  These two had a true love/hate relationship going on the only thing in question was whether they loved to hate each other or hated to love each other but I'm guessing that at this stage of the game even they didn't know.

Will & Patrick Meet the Family...or at least we meet Will's family. Which apparently includes his ex, Ryan? Why I ask you why would anyone include their kid's ex in family gatherings? I'm sorry I don't care how much I may like my kid's ex...my kid is my kid and his ex is just that his ex. There is no freaking way that I would ever include them...unless of course I was so oblivious to things that I couldn't see that my kids ex had a toxic personality and I somehow thought they were good for my kid...yeah, Imma' gonna' get me some of those drugs...no thanks. So in spite of the presence of Will's less than stellar ex. I actually enjoyed this episode more than the first one and for me it comes in somewhere between 3.5 - 4 stars but definitely things are heading in the right direction when it comes to holding my interest.

and the last episode in this audio book is...

Will & Patrick Do the Holidays...so I'm a bit of a Christmas fiend and this one just did it for me. It's the holidays and we all know holidays + family = stress, anxiety, drama, angst and all things that make for insanity and needless to say in this department Will's family is no different than the next persons and...before I forget there's more Ryan. But it seems that maybe cracks are starting to show in Ryan's public facade and the court of public opinion is starting to reconsider his 'golden boy' status one can only hope but even more importantly it looks like Will and Patrick are beginning to realize that while their marriage may have resulted from a moment of #badlifechoices there may be more to it than either man is willing to admit or to let go of just yet...so I'm giving this one '4 sign me up for more Will & Patrick stars' because these two are definitely taking the long and winding road to happily ever after and they've got me wanting to take the trip with them.

Buylinks are provided as a courtesy and do not constitute an endorsement of or affiliation with this book, authors or booksellers listed.