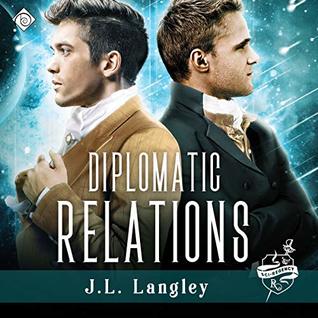 A lusty special forces soldier who lives by his own set of rules, Dalton Fairfax decided long ago to stop wishing for his father’s love, and he found his calling. Now that he’s back home and between assignments, he finds himself at loose ends. When the opportunity arises to play bodyguard and help out his country, Dalton jumps at the chance. Not only does it keep him busy, but it just so happens that his charge is the man he saw on leave last month and hasn’t been able to get out of his head.

Heir to a dukedom and a conservative politician, Blaise Thompson strives to prove himself worthy of carrying on the family legacy as the next IN Councilman. However, his closest competitor keeps getting in the way and taking credit for Blaise’s ideas. Maintaining his stellar reputation isn’t easy to do while keeping his outrageous younger brother in line and foiling his rival’s personal attacks. He has no time for a guard and even less time for romance.

When a priceless antique goes missing, Blaise and Dalton discover that Regelence has larger problems than just IN plots. Now the only way to stop a scandal that threatens both of them is to compromise, and they are forced to confront the risk of losing everything… even each other.

I think this might actually be my favorite one yet in this series...

"Diplomatic Relations" mmmm...I don't think this means what we all think it means...lol!!!

J.L. Langley's 'Sci-Regency' series will always have a special spot in my heart because many years ago when I was reading a lot of fantasy and m/f romance and honestly just getting a bit disillusioned with both genres because things were seeming very same old, same old a book called 'My Fair Captain' caught my eye and my little pea-brain whispered "Come on try it you know you wanna" and really I did so I did and I read it and then I went back to the beginning of the book and read it again from there I discovered a world of stories that have delighted me and yes...sometimes they've also disappointed me but if we didn't encounter the bad...how would we ever really recognize and appreciate the truly awesome.

While the previous books in this series have involved members of Regelence's immediate royal family this one is...well, it's more about the royal relatives. Relatives like Dalton Fairfax who is not only the heir to the marquess of Ravensburg but cousin to the royal princes. After flaunting one societal rule to many, Dalton finds himself with a commission in the IN to be followed by a couple of years in the Regelence Navy.

Now that he's completed his time with the IN, Dalton's returned to Regelence and his ready to start his enlistment with their navy. While his enlistment may have been less than voluntary, Dalton has come to realize that it's one of the best things to happen to his life so far and it's Dalton's plan to make a life in the military his career, but not with the IN...nope there're things going on in the IN that are questionable at best and while he loves the military Dalton loves Regelence, his home planet  and that's where he wants to be. But Dalton's goals take a slight detour when he learns that Blaise Thompson the Viscount Redding is in need of a body guard...one look at Blaise and Dalton's more than willing to guard his body.

While Blaise is determined to keep his distance from the less than reputable rogue, what he comes to realize is that Dalton is much more than the picture that people would paint of him.

While I've absolutely enjoyed all of the previous books in this series none have delighted me like this one. For Dalton and Blaise the journey to be together is filled with challenges and danger but ultimately it becomes a question of trust and faith. Both men are going to have to trust in what they've built together and have faith that it will weather the storm of societies judgment.

'Diplomatic Relations' not only gave us new MCs but a new narrator...KC Kelly was the narrator this time around and this was probably the perfect time to switch narrators in a series since not only did we have two new MCs but because they weren't direct members of the royal family we were also treated to a host of new secondary characters so while some of the usual suspects were on hand for the most part they were a little further in the background than usual allowing the listener to focus more on the new voices that Mr. Kelly provided as opposed to comparing interpretations of characters from previous stories to his interpretation in this story. Overall I enjoyed this audio book every bit as much as the previous stories.

While these men may be opposites in their own way, there's also a balance between Dalton and Blaise's personalities that allows them to temper the more extreme sides of each other's personality and at times this can create more than a few sparks between these two men.

There are events at play that have still not fully unfolded and hopefully as we progress in this series I have faith that the author will lead us where she needs us to be to bring things to their inevitable conclusion and while I have little doubt that I'll enjoy the next book the story that I'm waiting for is Tarren and possibly there will be another of the royal family's guards involved...I'm just saying that's what this reader is hoping for after all he may only be one of the royal guard but I think he's the royal guard for Tarren...but that's another story for another book...right?

This is the part where I would usually tell you that an audio book of 'Diplomatic Relations' was provided by the publisher in exchange for an honest review, however, that wasn't the case here a copy of this audiobook was provided by me because I really, really wanted to listen to this one so I bought me a copy and I regret nothing.