Audio Book Review: Enhanced #4: The Strength of His Heart by Victoria Sue 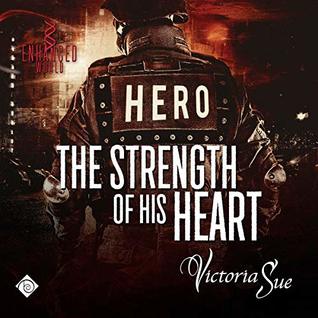 So far in this series 'The Strength of His Heart' has proven to be my favorite story and with this chance to revisit the story on audio I can comfortably say that hasn't changed. So I'm going to borrow a bit from my original review and add some thoughts on the audio for this updated review.

I've really enjoyed all of the books in this series so far but Vance and Sam's story is definitely the one that I've connected with on the strongest level. These are two men who at first glance appear to be strong...Vance with his big strong body and Sam with his cool and unflappable exterior. Never letting anyone in and keeping the world at arms length.

As Sam, Vance and the rest of the HERO team race against time to figure out how to stop the disappearance of young enhanced teens both men find themselves faced with the realization that the share an attraction and it's one that only one of them is willing to risk. Sam's idea of a relationship is one and done. He doesn't do forever or happily ever after...he's pretty sure that it's not a thing for people like him.

While Vance has had to deal with being an enhanced which in this world is definitely no fun. He's done so with the benefit of a loving and supportive family and most of the local law enforcement. Vance is such a sweet soul...I'm not sure that it would be truly possible to not like him. Sam's not been as lucky. Growing up for him was a matter of survival and he had to grow up really fast and hard to be able to take care of himself because there was no one else to do it.

As Vance and Sam work with the rest of their team to solve this mystery...it's Vance who ends up going undercover while Sam suddenly finds himself confronting his past...a past he thought was long gone.

Like others who read the book I wouldn't have been opposed to a bit more page time for the romance but I also feel like given what was happening with the rest of this story for Vance and Sam to have all kinds time for romance and intimate moments wouldn't have felt quite right ...for me it comes down to a question of 'would someone who has dedicated their life to protecting and serving really be more worried about 'getting their groove on than saving the lives of those that they've chosen to serve and protect?' for me that's a 'no'. I'm not saying that they would totally disregard their personal life just that at times like this other things would realistically take a back burner...so having said all that maybe there's more in store for romance between Vance and Sam...after all the ending of the book leaves Vance and Sam in a very good place with potential for all the romance that we missed out on in this story.

Once again with this story we are treated to the audio talents of Nick J. Russo and once again what we're given is an audio version of the book that's enhanced by the emotion and personality Mr. Russo brings to the characters in this story as well as the familiarity he adds to characters from previous stories that he also provided the narration for. I love the consistency of having the same narrator for a series as much as possible the comfort of having the voices retain their familiarity takes things from simply listening to an audio book to having people you know...friends share an adventure with you.

An audio book of 'The Strength of His Heart' was graciously provided by the publisher in exchange for an honest review.