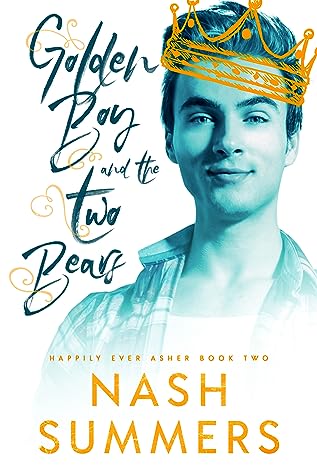 Asher Williams is obsessed with love.

His column is thriving, fellow students trust him with their relationship woes, and he’s on his A-game when it comes to matchmaking. At least, matchmaking other than his own.

After a heartfelt letter written to his column, Asher is set on aiding the two love-struck heroes who desperately need his help.

But like every heroic quest, there are a few bumps in the road and dragons to slay.

Randy and Red can’t stop passing looks whenever Asher voices his plans;, the handsome Christopher might not be quite what Asher expected, and his dark, mysterious roommate, Morgan, might have a surprise or two up his sleeve.

It doesn’t matter though. Nothing will stop Asher when it comes to helping people find their true love.

He’s absolutely positive everything will work out in the end.

I begged (BEGGED) the author for a copy even though I was late with reading/reviewing the first book, because the first book was ever so fabulous and I needed this book like I needed to breathe. Thankfully, Nash is a lovely person and sent me the book.

I dove right in, obviously. And then read it again. Because I could.

In this 2nd book in the trilogy called Happily Ever Asher, we find our protagonist still wielding his love guru column like a White Knight's sword. This time, Asher is approached by two young men, football players, a couple, who have their eye on another football player, albeit from a rival team, and want to make him their third. Asher is thrilled to be of service and does what he can to unite the Golden Boy with the Two Bears.

Meanwhile, Asher's own love life isn't working out as well as he'd hoped, which is partly because the wolf isn't as perfect as Asher thought, and partly because Asher can't see the forest for the trees, the point of which is driven home at the end of this book when... nah, not gonna tell you, of course. Read this for yourself and delight in the quirky characters the author created, revel in the hilarious situations our protagonist finds himself in, and rejoice in Asher's shock and surprise at the end, when the trees part and he sees...

I absolutely adored this character. His quirkiness notwithstanding, he has a huge heart, he's persistent, he's in love with love, and his match-making skills are epic. Even when he's not actually trying. He's more vulnerable than he perhaps thinks, but he's also mostly happy, and loves to rile up his roommate Morgan, a big, hunky football player, who usually just puts up with Asher's antics and who probably wouldn't take the gentle ribbing from anyone else.

To the reader, the outcome of this trilogy is fairly obvious, even if Asher is clueless, so I wasn't entirely surprised, but I thoroughly enjoyed the journey the author takes us on, to get them to this point.

Loved this so much. You will too. This trilogy must be read in order as this book is a continuation of the first one.


** I received a free copy from the author in exchange for an honest review. **