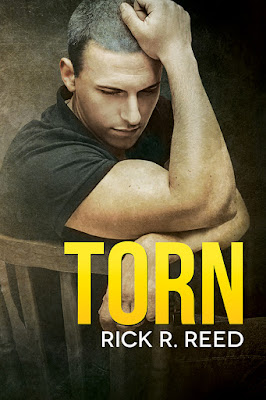 Ever been torn between two lovers? That's Ricky Comparetto's problem.

It's 1995, and Ricky is making his very first trip across the pond with his best friend. Ricky, hungry for love and looking for it in all the wrong places, finds it in the beach city of Brighton. His new love has the curious name of Walt Whitman and is also an American, which only serves to make him sexier and more intriguing. By the time Walt and Ricky part, promises are made for a reunion in Boston.

But the course of true love never runs smooth. In Chicago Ricky almost immediately falls in love again. Tom Green is a sexy blue-collar beast with the kindest heart Ricky has ever run across.

What's he to do? With a visit to the East Coast on the horizon and a new love blossoming in Ricky's home of Chicago, Ricky truly is torn.


In which our hero, Ricky Comparetto, finds himself lost on his very first time in London in the wee hours of the morning. It serves him right, after his shameless behavior at an after-hours sex club.

Much later, I found myself wandering the streets of London near New Scotland Yard, searching through its labyrinthine corridors for Trevor’s building. In the quiet darkness of London’s wee small hours, it seemed the world had paused to take a breath. Again, a feeling of things being surreal overcame me; I wondered if I’d ever find my way back to Boutros again, or if I’d be doomed to wander endlessly through this curving warren of streets.

It was maybe three o’clock in the morning, and Westminster felt almost like a movie set, perhaps something dystopian, where the main character wakes to find the world empty. The light of Big Ben shone in the distance, but I had no idea how to get back to Trevor’s.

I was too exhausted to panic, however, even though I felt like a rat in a maze, a charming, historic maze, but a maze nonetheless. Looking back, I recall that I felt serene, strange as that is to remember.


I had just decided to see if I could find a park bench or curb to lie down on—to await morning’s light and new clarity to get back to my friends—when I discovered that there was such a thing as a bobby, the Brits’ word for a patrolman on foot. This bobby, who was dressed all in black with a tall hat adorned with a shield, and I appeared to be the only ones about, other than the black cabs that passed by stealthily, similar to the one that had deposited me in a place I’d believed was close to Trevor’s.

I approached the bobby and told him, a little abashed, that I was lost. I supplied him with the name of the street I sought and, for good measure, what Trevor’s building looked like.

He nodded, all business. “You need to cross the Thames”—he pointed that way—“and then make your way back in the opposite direction from where you were going. You’re not far.”


I thanked him, but his directions simply didn’t feel right. I didn’t want to argue with him, and I certainly didn’t want to believe he was fucking with me, so I didn’t question him. I may have been lost, but I wasn’t that lost. I let him continue on his rounds. I stood still, not wanting him to see me continue on what he’d most likely perceive as my misguided path. Why’d you bother asking him if you weren’t going to listen? I wondered but had no good answer for myself.

I plopped down on a bench to ponder what I should do. I supposed that, with morning’s light, Boutros would be worried (or worse, would believe I’d shacked up with yet another man) and come looking.

I questioned my decision to part from Boutros and Trevor earlier in the evening, when the gay club we were drinking at closed its doors way too early for me. I mean, really, eleven o’clock? And this was “swingin’” London? Trevor suggested I go to an “after-hours” club called the Brick. He told me it was a no-holds-barred kind of place. Or was it “no-holes-barred”? Whatever. The idea of the “Felliniesque” club, as Trevor described it, appealed to me.

So I went, met a few nice boys, and ended the evening by being showered with come in a cloakroom, courtesy of one half of a couple I’d met who were visiting London from Liverpool.

I thought it would be easy to get home because Trevor’s building was within walking distance of New Scotland Yard, which is where I told my cabbie to drop me.

After a while, I got up from the bench and started wandering again. And then I stopped… and sighed with relief. Just ahead was one of those iconic red phone booths you might imagine when you think of London—or Doctor Who.

“Oh thank God,” I whispered, making my way to the booth. I groped in my pocket, hoping the receipt upon which Trevor had written his phone number earlier was still there. What if it isn’t? I thought, the panic already causing my pulse rate to quicken despite my fatigue, the copious amounts of alcohol I’d imbibed, and the two orgasms I’d had at the Brick.

But my hand curled around the little slip of paper, and I brought it out and squinted at the scrawled number in the wan light. I lifted the phone off the hook, deposited a mystifying array of coins that I hoped would be enough, and dialed.

I told him my problem and described where I was, along with the cross streets nearby.

He didn’t seem fazed, for which I was grateful. “Hang on, sweetie. I’ll be right there.” He disconnected before I could say anything else.

I left the phone booth and sat down on a curb. I regarded the crescent moon above for only the shortest of times. Trevor appeared before me, like an angel, within a matter of fewer than five minutes.

I didn’t have much to say, other than to express my gratitude… and embarrassment.

His building turned out to be around the next corner.

Rick R. Reed draws inspiration from the lives of gay men to craft stories that quicken the heartbeat, engage emotions, and keep the pages turning. Although he dabbles in horror, dark suspense, and comedy, his attention always returns to the power of love. He’s the award-winning and bestselling author of more than fifty works of published fiction and is forever at work on yet another book. Lambda Literary has called him: “A writer that doesn’t disappoint…”