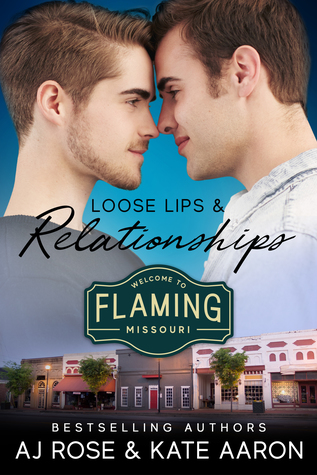 Flaming, Missouri is the perfect place for police officer Marc Warren to heal his battered heart after a broken marriage. The tourist town is an easy beat and he finds sanctuary in his beautiful cabin on the Lake of the Ozarks. So when Grant “Good Time” Taylor shows interest, Marc is in no hurry to let Flaming’s resident bad boy rock his boat.

Grant has no interest in dating locals. Tourists are plentiful and don’t want more than he’s willing to give. But a bar bet turns personal when Marc hands him a humiliating public rejection. If Grant wants to get under the mysterious officer’s skin, he’ll have to offer more than a temporary port.

The small town rumor mill gets a jumpstart as Marc and Grant realize what they’ve been missing all along—each other. But not everyone is happy for them. Someone will stop at nothing to sink the budding relationship. Can Marc and Grant overcome their fears to fight for each other, or is their happiness destined to drown?

Award winning authors AJ Rose and Kate Aaron have teamed up to welcome you to Flaming, MO, a cozy thriller series with feel-good themes, charismatic characters, and a small town with a big heart.

This is billed as a cozy mystery, but I didn't get that vibe from this book at all. To me, this is a romance with a lot of family drama and misunderstandings. Also, Marc's mother needs to get on a one-way trip to anywhere-but-here. More of her further down.

Welcome to Flaming, MO, small town on a lake, full of tourists and very supportive of its LGBTQ residents, where Marc Warren came for a new job as a police officer after a divorce to lick his wounds. Grant Taylor, nicknamed Tay, is fun-loving, relationship-phobic local guy who works at the boat docks and just wants to have a good time.

A bet leads Grant to make a move on Marc, only to be shut down hard because a) Marc doesn't do one-night-stands, and b) Grant's mother just happens to be the police chief, and Marc isn't going to risk his job by defiling his boss' son.

Grant, having no idea how to deal with this unexpected rejection, makes a few more moves only to be denied time and again. Until Grant shows Marc that there's more to him than just good-time-Tay, and a relationship begins.

Grant's mother doesn't interfere (much) in her son's love life, but Marc feels as if she needs to give her permission anyway. I liked her a lot - she was down to earth, sensible, and clearly loved her son.

Marc's mother on other hand was a narcissistic, bullying bitch from hell, and I wanted to reach into the book multiple times to throttle her. While she supposedly suffers from NPD, I couldn't help but despise her. She was the exact opposite of Grant's mother - it was all about her, and her gaslighting, manipulative efforts to break up Marc and Grant, and her modus operandi of presenting herself as the victim were horrible. She had zero redeeming qualities.

The writing was crisp and nearly flawless. Scenes moved seamlessly from one to the next, and the plot unfolded organically. I liked both characters, and I thought it quite nicely done to give Grant a chance to show the real him, the one he keeps hidden even from his closest friends, behind the walls of the happy-go-lucky good-time-only young man that he seems at first to be. Most of the angst in this story is rooted in insecurity that festers in both men - for different reasons. Both experience growth over the course of the book and come out stronger and better on the other side.

We get to be in both Grant's and Marc's heads pretty evenly split, and the characters were given distinctive voices so I never had any trouble knowing who was telling the story at any given time.

This was an excellent start to what appears to be a new series, co-written by two fabulous authors who seamlessly meshed their writing styles to give us one engaging romance.

Also, I would really like for this fictional town to be real. Acceptance and support of LGBTQ folks should be the norm, not the exception, and it would be awesome if we as a country could be more like the people in Flaming, MO.


** I received a free copy of this book from its authors in exchange for an honest review. **