Hi! Kim Fielding here to brag about my new book, Redesigning Landry Bishop. Okay, not exactly, although of course I hope that the moment you’re done reading this post you click on a buy link, read the book in rapt delight, and then leave glowing reviews everywhere. But first, I’m going to talk about weird ways to serve food.

Now, generally speaking, nice restaurants in North America and Europe serve meals on plates. (Possibly that’s true elsewhere as well, but I haven’t visited any other continents so can’t speak from experience.) As serving pieces, plates make sense. They’re easy to store, handle, and wash. They come in various sizes to suit different servings. They usually have some kind of edge or lip to help corral food and sauces. They come in an endless variety of patterns to suit themes and decors. Plates can be shockingly expensive or they can be really cheap.

In recent years, however, some restaurants in the US (and elsewhere) have decided it would be clever to serve food on… things not usually used for serving food. Wooden planks were an early example of this, and I suppose they make sense too, especially since some foods such as salmon may actually be cooked on planks. And french fries in little wire baskets also make some sense.

But that’s not good enough for some restaurants. In Las Vegas my husband received french fries in a miniature metal shopping cart, and I got a grilled cheese sandwich hanging from a hook. In Portugal I was served a beautiful salad… in a flower pot. In Austria my daughter’s burger came on a slice of tree trunk, complete with bark. In France we got an amuse-bouche that consisted of an egg mixture cooked in an eggshell and served in a nest. There’s actually an entire Reddit devoted to this trend, r/WeWantPlates.

I had a lot of fun with this idea in Redesigning Landry Bishop. At one point Landry and his personal assistant, Jordan, have dinner at a restaurant that eschews traditional serving ware. Landry promotes creativity in people’s lives, but I’m not sure he’s impressed with this.

What’s the strangest way you’ve ever been served a meal or a drink? 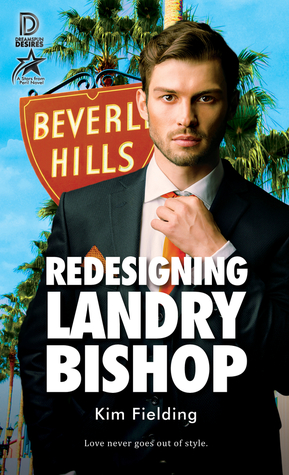 Love never goes out of style.

Landry Bishop fled his tiny hometown and never looked back. Now his expertise in food, fashion, and décor has earned him all of Hollywood’s glittering perks. But with his husband deceased and his personal assistant retired, Landry has nobody to rely on—and no one to help him indulge his secret cravings.

Casual, plainspoken Jordan Stryker seems a dubious choice of a PA for someone as formal and self-controlled as Landry. Jordan’s questionable fashion sense and limited kitchen skills don’t exactly enhance his résumé. But as Landry soon realizes, Jordan has many attractive qualities too.

With a strong pull toward Jordan, new career opportunities on the horizon, and a persistent tug from family back home, Landry is in a quandary. He can advise others on how to make their lives special, but what should he do about his own?


Half an hour later, while Landry was puttering around with an experimental tabbouleh recipe, Jordan and Elaine joined him in the kitchen. “Try this,” he ordered, handing them each a spoonful.
Jordan made approving noises, but Elaine frowned. “That’s not a grain.”
“It’s cauliflower.”
“For the love of God, why?”

“For people who want to eat grain-free.”
“If you don’t want to eat grains, you shouldn’t be eating tabbouleh.” She took Jordan’s spoon along with her own and washed them in the sink.
“I like it,” Jordan announced. “It’s kind of crunchyish.” He seemed sincere.
“Thank you,” Landry said.
“Hey, um, you didn’t really have an important phone call, did you?”
“No. That was Elaine rescuing me.”
“I kinda figured. Except… I hope this doesn’t sound rude, but why did you need rescuing? Those guys were hot. That whole thing was like the opening of a pretty good porno, you know? If they’d been all over me like that, I sure as hell wouldn’t have wanted rescuing.”
Landry pushed aside the interesting information that Jordan was attracted to men. His PA’s sexual orientation was irrelevant. He also pushed aside a stupid and inexplicable jab of jealousy. If Jordan wanted to fantasize about group sex with hunky furniture deliverymen, that was none of Landry’s business. So he focused on the question itself.
“Why do you think those extremely attractive men were so interested in me?”
“Um, because they were throwing themselves all over you.”
“Yes, I suppose they were. But why? Why me?”
“’Cause you’re damned hot too.”
Even as Landry’s face heated at the unexpected compliment, Jordan’s cheeks turned a charming shade of pink. Interesting. Their gazes locked so tightly that Landry wondered if either of them would ever look away. Or if he wanted them to.