I write in a number of subgenres, but my first historical novel, The Actor and the Earl was published back in 2012, and came of something of a surprise to me. What I mean by that is that I had a nugget of an idea that just wouldn’t leave me alone. I intended to write a quick 25K novella and get it off my chest, but little did I know that the idea would grow and grow. Looking back a big part of the reason was it was rooted in my favourite era of British History, Tudor/Stuart, a time I love where everything felt larger than life; the time of Shakespeare and political machinations across Europe, when fashions were strange but you still see evidence of the architecture strewn across the UK. Seven years later I’m back with Anthony, Earl of Crofton using the same characters and still loving the period.


I’m not a historian by training (I’m a scientist), but I love to research all the little things that make a historical novel feel true to the period its set in. There are the big political power plays of the time, down to the day-to-day things like when the main meal was taken, and what it was they ate.

I am beginning to dabble in other times (Captain Merric my pirate novel was set in 1714), and I’m working on a Restoration novel which will be followed by a Regency and then a Victorian one as we follow the Earls of Crofton through the generations. But I will always have soft spot for the Tudor and Stuart times, and even when I took part in a charity anthology A Summer’s Day which was Shakespearean themed, I ended up writing Much Ado About Lady Macbeth, a short story about two Elizabethan actors squabbling about who would get a part. Perhaps I was born 400 years too late…

In this extract Anthony must start to befriend an actor with the King’s Men who is a potential subject in the plot against the king. He starts by inviting Jerome Weaver to supper:

Jerome was at least punctual. He was standing outside Whitehall Palace as Anthony approached, having the good sense to know it was poor form to keep a man of Anthony’s position waiting. Like many of the players, Jerome was attractive, with an impressive physique that would set many of the female audience members quivering. Anthony could see him playing the dashing hero. He doubted Jerome, even when younger, would’ve been able to take on the female roles, like Sebastian had, since Jerome was too broad to be a damsel. There were plenty of other boys, like Elias, who were more suitable. So maybe he’d had a late start to the theatre and was now desperate to catch up.

“Good evening, my lord. I cannot thank you enough for your generous invitation.” Jerome bowed and looked surprised as he straightened. “If you do not mind me mentioning, I had thought Sebastian would’ve been with you.”

“Sebastian has an open invitation to court. He does not need me to accompany him at every step, but if you are concerned, he is supposed to be in attendance.”

“Oh, no concern. Just surprised. You are such good friends; I am used to seeing you together.”

Anthony could tell when someone was fishing for information, and he didn’t blame Jerome for doing so. Whatever his motivation, he was bound to be curious about an obvious change. He kept his response neutral. “I have many friends. Now, come with me. The king’s hospitality awaits.”

Even though there was no special occasion, the palace was busy. Jerome’s head turned in every direction, watching the country’s elite set out before him in their finery.

“Is this your first time at the palace?”


“Yes, as a guest. I have dearly wished to attend for several months but I have not been so lucky until today.”

“Well, yes, but only twice, and it is not the same as being a guest. I have never been invited to stay after a performance.”

“I understand that only those who play the leads are usually invited. You should make the most of the evening. There are plenty of influential men here who would be happy to support a promising young actor.” It was a heavy hint; he did not need to add that he was one of them.

“I would be a lucky man if I could find a patron half as supportive of me as you are of Sebastian.”

“Sebastian is a successful actor; he does not need my support. His talent will carry him far.”

Jerome considered him for a moment. Anthony wondered if he’d played his hand too quickly, but Jerome licked his lips. “I would be very, very grateful to have your patronage. I would be willing to show you how much, if you so desire.”

The invitation was clear. “But that is hardly appropriate conversation for court. You have much to learn.”

Jerome bit his lip, playing coy. Anthony didn’t believe him for a moment, but if he were not so devoted to Sebastian, he’d have considered Jerome a tasty morsel.

“Send for me at any time, my lord. I would be more than happy to have the conversation privately.” 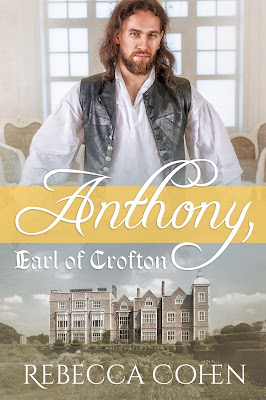 
A tale set in Stuart England, where the king’s life depends on his most loyal of subjects.

Anthony Redbourn, Earl of Crofton, delights in his reputation as a charming rogue. Life is never quiet at the court of King James I, especially with his good friend and secret lover, Sebastian Hewel, by his side. As an actor with the celebrated King’s Men, Sebastian has his own admirers, but neither man has eyes for anyone else.

When a plot against His Majesty is uncovered it threatens Anthony and Sebastian’s charmed lives, and they are dragged into the political intrigue and the race to save the king from danger. Fear that a traitor is linked to the King's Men leaves Sebastian and Anthony with no choice but to stage a very public dissolution of their friendship, so Anthony can be free to be the patron of a new rising actor, and Sebastian can be the prodigy of another noble.

It is a dangerous game they are playing to expose the plotters and still find a way to meet in secret, as Anthony is adamant that they will not sacrifice the love they have fought so hard to win. They will do whatever it takes to protect the king’s life, and their commitment to each other.

REBECCA COHEN spends her days dreaming of a living in a Tudor manor house, or a Georgian mansion. Alas, the closest she comes to this is through her characters in her historical romance novels. She also dreams of intergalactic adventures and fantasy realms, but because she’s not yet got her space or dimensional travel plans finalised, she lives happily in leafy Hertfordshire, England, with her husband and young son. She can often be found with a pen in one hand and sloe gin with lemon tonic in the other.