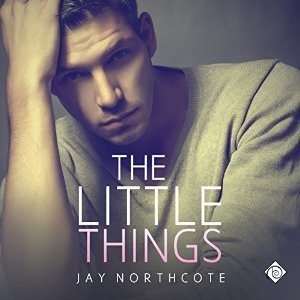 
There are lots of things that brighten Joel’s life. His three-year-old daughter, Evie, is one. His close relationship with her mother, his best friend from university, is another. Joel’s boyfriend, Dan, adds spice to his child-free nights, and Joel is pretty happy with how things are.

Then one cold and rainy night, everything changes. Joel's life is turned upside down when he becomes a full-time dad to Evie, and his previously carefree relationship with Dan cracks under the strain.

Meeting Liam, who acts as if getting hurt isn’t a foregone conclusion, shakes Joel to the core. Their attraction is mutual, and Liam makes no secret of how serious he is about Joel. But Joel is wary. He tells himself he’s keeping Liam at a distance for Evie’s sake, when really he’s protecting his own heart. Taking a chance on this new relationship with Liam may seem a small step—a little thing—but is it one Joel can take after losing so much already?

It's been almost a year since I read this story for the first time...

and happily on this second time around with the audio version I've enjoyed this story just as much as I did that first time so...I'm going to borrow some from my first review since I'm a solid proponent of the expression 'if it ain't broke, don't fix it.'

But before I start about the actual story lets chat about the narrator, Matthew Lloyd Davies. While this is my first time listening to this narrator it is by no means his first audio book...nope, this narrator has just over 150 books in various genres to his credit and I have admit there are now a few more audio books on my wishlist (pronounced Karen's future shopping list). Jay Northcote's books are usually set in England and by usually what I mean is all of the ones that I've read and/or listened to have taken place there.

So having a narrator who has or can do a British accent for me is always a plus because it just adds to the setting and this narrator has a wonderful accent...yes, I'm a sucker for accents and equally as important is the fact that while there was more than Dan, Liam and Joel in this story and I found each persons voice to be readily identifiable I was particularly appreciative of the face that each of these men had their own voice and I had being able to identify who was speaking was not a challenge. From an audio perspective this is definitely a story and a narrator that I would recommend.

Finding the right person is hard at the best of times, but when you've got a kid...it's a whole other level of challenging.


Joel's life isn't quite what he imagined but still he wouldn't change a thing especially the part that gave him an adorable daughter named Evie. He's got a boyfriend named Dan that Evie seems to really like. So while life's not quite what he'd imagined Joel's got a job he enjoys, a boyfriend he thinks might be the one, he shares custody of his daughter with her mom and while it wasn't what he thought it would be, life was turning out to be ok for 23 year old Joel.

But it only takes a moment for things to change and when that moment comes Joel finds that he's suddenly the sole guardian of his beautiful little daughter and that maybe Dan's not the one, as the pressure of full time parenthood begins to shine a bright light on the cracks in their relationship and an accidental encounter with a stranger named Liam gives him more comfort than all the time with Dan possibly could. After yet again encountering Liam, Joel comes to the realization that he and Dan really weren't meant to be and ends things. After encountering Liam yet again Joel gives in to his attraction and he and Liam begin to get to know each other.

'The Little Things' isn't a love story or even a romance in the typical sense of the word but what it is, is a story about finding love and not the magical romantic stuff of fairy tales no this is the love that exist in the everyday world and sometimes it's scary and it doesn't always fit into our lives but if we want it than we find a place to squeeze it in and we work at keeping it.

I loved this story. Joel's a real person with real problems. I've known more than one single parent trying to do the juggling act with life where they give everything they've got to their kids, to being good parents and then they're left trying to squeeze just a little something out for themselves from the time that's left and it's hard, seriously freakin' hard.

Partially because of the whole time issue and partially because most single parents have a story to tell and more often than not that story isn't a sunshine and roses story with a cutesy happily ever after. It's a story that has some level of pain, struggle and heartache in it. Sure some people choose to have kids without a partner but more often than not the reason that a single parent is a single parent is one that's not entirely of their own making as was the case for Joel. So by the time Liam came into Joel's life...well, Joel was well into having issues about people leaving his life, so I have to admit I found Joel's treatment of Liam frustrating at times to say the least but as frustrated as I was I could see where Joel was coming from and basically I sat on my hands and growled at Joel to man up.

One of the things that I liked the most about this story was surprisingly...Dan. I admit when I read the blurb I was anticipating not liking Dan...yep, Dan was going to be my bad guy...well, surprise, he wasn't. Dan was 19 to Joel's 23 and he and Joel had very different backgrounds so realistically Dan was an average 19 year old. He wanted to go out and have fun. But he did man up a couple of times when Joel really needed his help and support and he did it of his own accord but I have to admit I honestly can't find fault with a 19 year old who isn't ready for the kind of responsibility that a relationship with Joel would entail so I liked the way Dan and Joel's relationship went. I liked that there was no over the top drama between the Joel and Dan even when things were ending between them.

'The Little Things' was a warm and heart melting story about someone that felt like they could have been your neighbor or mine, an average person that we might all know. It's an everyday story about an everyday person...that any of us could know and sometimes those are the best kind of stories to read.

An audio book of 'The Small Things' was graciously provided by the publisher in exchange for an honest review.