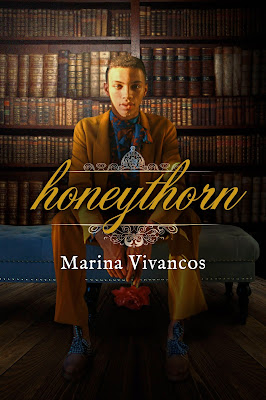 Omega Milan Pryor knows his duty. He must travel North through the continent towards the snow, the cold, and his new betrothed. They say that Lord Alpha Raphael Ledford, the man he is to marry, is as artic as the weather of his land. But Milan has always been an optimist. Perhaps he might find friendship in the arranged marriage. Even love.

It doesn’t take long for Milan to realize that all the rumours about Lord Raphael are true. Reclusive, distant, frigid. Milan finds himself unwelcome in what he must now call his new home. He’s used to fighting for what he wants—but can he survive a husband as cruel as Lord Raphael?

Or will Milan perish along with his heart?

In Honeythorn, the author created a fascinating world filled with steam engines, manors, one great continent, Alphas, and omegas. The setting has both a steampunk and Regency feel. The Alpha/omega dichotomy presented is equivalent to the male/female one in our world, with omegas treated not quite as equals.

Milan is from the South, where the climate is warmer and the customs more casual than in the North. As an omega, Milan carries out familial duty and agrees to marry Lord Raphael to strengthen the peace treaty between the different sections of the continent. He travels two weeks in a “crawler” only to find that his future husband and mate is a cold, withdrawn man who doesn’t to want anything to do with Milan.

Lord Raphael is initially very (and I mean, VERY) difficult to like. He is absolutely horrible to Milan and takes to wearing leather gloves, depriving his omega of even the smallest touch. A bonded omega whose bond isn’t nurtured could die, but Raphael doesn’t seem to care.

Milan’s POV is the only one that filters the story, and Raphael doesn’t make a good impression, not on Milan and not on the reader. I think this story would have been stronger had Raphael’s POV been included. There is a reason he behaves as he does, and I don’t think revealing Raphael’s painful past earlier would have stripped the story of any tension. I suspected the truth anyway.


The secondary characters are well-drawn, even if the villain is somewhat one-dimensional. The resolution toward the end of the story is too easy, but I liked how the MCs came together and how protective Milan was of Raphael.

The first half of the book has an enemies-to-lovers feel as Milan comes to fear and despise his husband. But the second half is quite romantic as Raphael finally relents following a near tragedy and begins to spend time with Milan. The two take long walks together and hold hands.

Milan is feisty. I liked that about him. And once Raphael opened his heart, he became a sympathetic character.

This book doesn’t skimp on the steam; there are several hot, hotter, HOTTEST scenes featuring biting, mating, and orgasmic bliss. And of course it wouldn’t be an Alpha/omega story without self-lubricating arseholes; they’re so convenient.

The ending, while a HEA, isn’t as strong a HEA as I prefer. I wanted an epilogue to get a sense of Milan and Raphael in the future, with their dogs and maybe a couple little omegas running around.