Blogtour and Release Day Review: Under His Protection by LaQuette


Love Is Real, Even When It’s Fake

Hello, I’m LaQuette, and I’m so happy to be here at My Fiction Nook.  Thanks so much to Sandra for allowing me to drop by.
As a reader of romance, there are several tropes I enjoy. Enemies to lovers and forced proximity romances are always a hoot for me.  But by far, one of my favorite romance tropes to read about is the Fake boyfriend.
Therefore, you cannot imagine my delight when I began the preparation work for my latest release, Under His Protection, and I realized for a good chunk of the book Elijah and Camden would have to pretend to be lovers when they couldn’t stand each other.
Why do I love the fake boyfriend trope so much?  It’s an opportunity for the readers to see how absolutely perfect the protagonists are for one another, even when they can't see it themselves.  It also makes for amazing chemistry, tension, and that amazing “ahh” factor that happens when a couple gets their happily ever after at the end of the book.
Look below to see just how amazing Camden and Elijah are for one another.

“I think it’s time we call it a night. Camden’s had a pretty hectic couple of days, and I’m sure he could use some rest.”
“Same sleeping arrangements as always, or you want Viv and me to take your room and share the upstairs with the ’rents?”
Camden waited for Elijah’s answer to Emmanuel’s question. As far as Camden could recall, there were only two bedrooms in this house. The master and the guest room Elijah had placed Camden in earlier. What other sleeping arrangements could Emmanuel be speaking of?
“Nah, you and Viv can keep the room in the basement. Camden and I are in my master. Pops and Mama can take the guest room down the hall once I’ve made it up.”
Camden swallowed his building anxiety. The quick hand job in his basement gym was one thing, but spending a night in the same bed as Elijah was a temptation Camden didn’t think wise. They hadn’t processed what had happened between them yet. Being locked in the same bed couldn’t help their situation.
Elijah stood up, hugged his father and brother, and gave his mother and sister-in-law each a peck on the cheek before he turned his gaze to Camden and extended a hand for Camden to take.
Camden watched his hand for probably what seemed longer than necessary to the rest of the room. Not that he didn’t understand the reason Elijah was doing it. No, he understood, but it still somehow seemed so out of character for the way the big man communicated with Camden.
“Camden, you coming?”
Camden blinked a few more times, clearing the fuzz from his head and finally stepping into his role as smitten lover. “I’m sorry,” he offered. “I guess I’m more tired than I realized.”
He gave one hand to Elijah and used the other to wave good night to Elijah’s family. He kept his mouth shut and his face free of the panic growing inside until he stepped into Elijah’s room.
Camden looked around the spacious room, hoping to find some sort of sofa for him to sleep on. Although the room was spacious, it wasn’t a suite built with separate rooms. There was a large king-sized bed in the middle of the room, two doors—one of which Camden assumed was a bathroom, and the other a closet—and a dresser and chest against two connecting walls.
“So, I guess I’m sleeping on the floor, then?”

Elijah closed the door behind Camden and shrugged his shoulders. “You can if you want to, but I’m too grown to be sleeping on the floor. It’s a king-sized bed. There’s more than enough room for the two of us.”
Elijah disappeared for a few moments behind one door, and Camden heard water running in the shower. When Elijah returned, he was shirtless, with a towel wrapped around his waist.
Camden’s mouth went dry, and his heart rate increased by more than a few beats a minute.
Holy hell!
Camden remembered how remarkable Elijah’s body had been. He remembered every plane beneath his lips and fingers and how touching him made Camden senseless with need. Seeing him now, still carved with rigid lines of muscle definition, made him thirsty in ways no drink of water would ever quench.
“Not long before my family arrived, we had each other’s dicks in our hands. I don’t think sleeping in the same bed together should pose an issue. You feel me?”
Camden swallowed hard, trying to pull his dry, thick tongue from the roof of his mouth. It took a few attempts, but he could finally shake the fog from his brain and the dust from his tongue to form a sentence.
“Yes.” Camden’s voice cracked on the one syllable. He cleared his throat and tried to speak again. “It should be fine.”
Elijah shrugged a shoulder as he turned around to return to the bathroom. The high and tight curve of his ass was still visible under the towel hanging precariously off his hips, making Camden’s hand itch with the need to grab a handful.
When Elijah disappeared into the bathroom again and Camden heard the audible click of the closed door, he released the breath he hadn’t realized he’d been holding and readjusted the growing bulge in the front of his pants.
“This will most definitely not be fine.”

I thoroughly enjoyed this book. I just love second-chance stories, where the MCs have history. This book paired two very different men who had a one-time one-night-stand that might have led to more if their lives hadn't been so different. Add to that a sociopath who wants to kill one of them, having to hide from this danger, meddling family members, and HAWT bedroom scenes, and you have yourself a nearly perfect story in which to lose yourself for a few hours.

I did not want to put this book down for any length of time.

Elijah Stephenson is stepping back into his precinct for the first time in months after having been nearly killed while working undercover in Vice, and he's now looking to cruise a desk job until it's time to retire. He has absolutely no desire to take on an assignment hiding the ADA because the leader of The Path, a pseudo-religious cult group doing all kinds of bad things, is trying to kill him before a major trial for which Camden is hiding a witness to take out the leader of this cult.

Camden Warren, the ADA in question, has been groomed since childhood by his father, a prominent judge, who wants Camden to run for political office one day. Therefore, daddy dearest has been interviewing potential husband candidates for Camden. Camden is not on board with this plan, but also doesn't have the strength to stand up to his father, but instead tries to buy himself time. Having a price on his head is something Camden has never experienced, and having narrowly escaped one attempt on his life, he's scared and worried.

A few years ago, Elijah and Camden shared one night of passion after they were set up on a blind date by Camden's boss and friend; it was a night neither of them forgot.

Now being thrown back together, hiding in Elijah's house in the 'burbs that nobody knows about, they have an opportunity to get to know each other again and explore the feelings they have suppressed for so long. Of course, initially, they're both loath to talk about what happened, even if they realize the undeniable attraction to each other - Elijah is still pissed at having been ghosted, and Camden knows that with his father looming in the background, he and Elijah have zero chance to be a real couple.

Obviously, with a price on Camden's head, they're not in an ideal situation to pick up where they left off, even if the UST is boiling between them, and there's much inner anguish on both sides around whether falling into bed is the right course of action.

The author did an excellent job creating two multi-dimensional characters, whose actions and reactions were quite believable. Both of them had vulnerable underbellies neither liked to show to the world, and they both had insecurities that they had to overcome.

The threat to their romance isn't necessarily the leader of the cult, but Camden's father, who wants to control his son to the point where he'll threaten not only the man Camden loves but Elijah's entire family.

How Camden finds his way out of that situation, and manages to get his man - well, you should read this for yourself to find out.

This was an excellent read. #OwnVoices 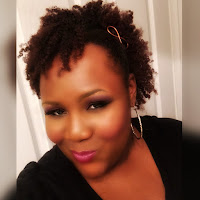 LaQuette is the 2016 Golden Apple Award Author of the Year winner. She writes bold and sexy tales for diverse characters who are confident in their right to appear on the page.