Thanks so much to My Fiction Nook for hosting me today! I’m Avery Cockburn, author of the Glasgow Lads series, a set of contemporary m/m sports romances set in Scotland. The newest release, Play Hard, is a followup “happer-ever-after” novella featuring Robert and Liam, the heroes of Playing With Fire.

Play Hard begins as Liam boards a nearly empty midnight bus outside the pub where he works, knowing his boyfriend, Robert, is waiting for him at his flat. The driver encourages him to stay away from the hostile-looking lads in the back seat, saying everyone’s on edge tonight because of “Blue Monday.”:

“Is that another fake holiday?” Liam asked the driver. “Was I meant to buy a card for my ma?”

“Naw, mate, it’s based on science. They say the third Monday in January’s the most depressing day of the year. Weather’s shite, nights are long, and people are pure skint after spending too much on Christmas presents. Plus, everyone’s chucked their New Year’s resolutions.” The driver patted his stomach. “I’ve not been to the gym in a week.”


Now that spring has sprung and the days are warm and bright again, it’s hard to remember how gloomy the weather was back in January, a month that felt like 31 Blue Mondays in a row. But I do remember the joy I found in writing Play Hard, and how much I needed the escape of a good love story.

Unlike most of my books, this happier-ever-after novella features very little sociopolitical content, and none of the characters were dealing with mental illness, trauma, or other major challenges. I was determined to write something light, something that was just pure sexy enjoyment.

I thought for sure I would end up adding plot complications (the Warriors open a gay sports pub!) and loads of angst (Liam’s long-lost father returns!), but somehow I resisted. I just stepped back and let these two fun-loving characters play their hearts out:

Robert placed his palms on Liam’s back—presumably to draw him closer, but it had the opposite effect.

“Here.” Liam lifted the duvet and pulled it over their heads, creating a cozy cocoon.

“Best to be unambiguous with place names, in case any tourists pop by.”

Thanks again to My Fiction Nook for hosting me. Be sure to enter below to win a copy of the Glasgow Lads Books 1-3 box set, which includes three novels and an essential short story.

You can also sign up for my newsletter to download a FREE copy of Glasgow Lads prequel novel Play On, in both its original and author-commentary version.

Cover Design: Damonza
Length: 32,000 words approx.
Glasgow Lads Series
The Glasgow Lads series centers around an all-LGBTQ football/soccer team in contemporary Scotland. Though the series has an overarching storyline, each novel features a new couple and a happy ending, so they can be read in any order. The series also includes a prequel novella and two (soon to be three) "happier-ever-after" followup stories. 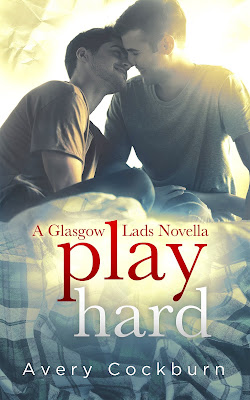 “I’ll always want more of you.”

Robert McKenzie lives to work. He’s fresh out of university as a video-game entrepreneur, and his new app could actually save lives. But burning the candle at both ends means missing out on the best parts of his own life—including his boyfriend, Liam.

Liam Carroll works to live. His job as a bartender pays the rent—if not always the heating bill—and that’s plenty for now. But Robert’s workaholism reminds Liam his own life is going nowhere, and his own dreams are scaring the pants off him.

To jolt them out of their ruts, Robert invents a new game: He and Liam are to take turns offering each other sexy new challenges with irresistible rewards.

Of course, Robert gets more than he bargained for, as Liam takes their game in one surprising direction after another. Whether it’s in the bedroom, on the football pitch, or at the pub (or even the supermarket?), the things they learn about each other—and themselves—could change their lives forever.

Note: This happier-ever-after novella features the main characters of Playing With Fire but can be read as a stand-alone story.


Hiya, I’m Avery Cockburn (rhymes with Savory Slow Churn). Under my real name (Jeri Smith-Ready) I wrote over a dozen novels for major publishers. As an indie author, my days are filled with beautiful men who play beautiful games in the most beautiful place in the world. Thanks to my pure awesome readers, it's pretty much the best job ever.

I live in the United States with one infinitely patient man and two infinitely impatient cats. Join my quarterly-ish newsletter to receive a free book plus loads of exclusive bonus material. Cheers!