Hello everyone! This is SA Stovall, author of the VICE CITY books, here to bring you my latest release, MODERN GLADIATOR! It’s a romance between a med school student, Corbin, and an up-and-coming UFC fighter, Keon. What I love about this novel is the enemies-to-lovers dynamic. Corbin thinks fighting is a waste of time, and hates that his sister is dating an MMA fighter. But he’s a doctor in his heart, and when Keon shows signs of having a serious injury, he’s determined to help—even if Keon struggles the entire way.

Seriously, it was a lot of fun to write this novel. I love UFC, sports, and enemies-to-lovers tropes. It’s just a good time, and that’s what I enjoy most when I read—so I hope all of you enjoy this excerpt! A major plot point in the book is a secret injury Keon hides from almost everyone, and it comes to haunt him in his first fight. 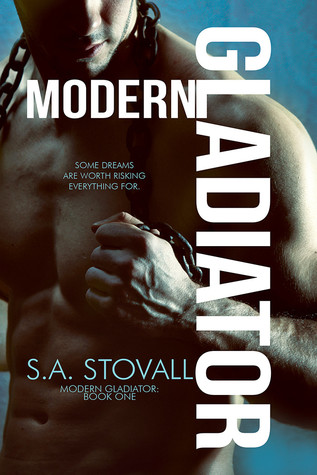 A prim and proper aspiring doctor and a destitute martial artist—both with hurts to comfort. Each with just the cure the other needs.

Corbin Friel hates mindless sports, especially fighting and boxing. As a medical student, he wants to help others, not watch them beat each other senseless. But his sister, Lala, can’t get enough of rough-and-tumble sporting events, and she drags her brother along whenever she can.

Keon Lynch doesn’t have much going for him. He’s broke, he lives alone in a new state, and he’s estranged from his family. But at least he has his dream—becoming a professional UFC fighter. Keon trains every day, and if he can just score a few more wins, he’ll get his ticket into the ranks of professional competitors.

But an unexplained pain jeopardizes Keon’s dream. During a backstage meet-and-greet, Corbin recognizes the telltale signs of a bone infection, which could cost Keon his leg. Unable to ignore Keon’s situation, Corbin begrudgingly decides to help. And while he gets to know Keon, finding him more desirable with each interaction, Corbin’s ex-boyfriend isn’t pleased with the development….

And he’s determined to keep Corbin for himself, no matter what.


Fight Night
Keon Lynch
The deep rumble of rock ’n’ roll pulses through my veins.
Heat scorches every inch of my muscles, making me want the fight even more. I hop in place, hyped on anxious energy. They haven’t opened the doors yet, but the announcer calls out my opponent. It won’t be long now. Then I’ll walk out to the octagon and the fight will begin.
One of us is going down.
“Ready?” Derek asks.
I reply with a curt nod.
The doors open. I’m bombarded by a wall of sound from the crowd. Cheering. Booing. Food gets tossed my way. I ignore it. Nothing will shatter my focus tonight. Anderson thinks he can break me? He’s got another thing coming.
Derek walks to the side of the octagon and stands at the corner closest to my side. I stride into the cage and tap my gloved hands together, enjoying the feel of my body straining to contain my excitement. Anderson dances around the opposite side of the mat, his sweat glistening under the harsh spotlight overhead. He glowers at me. Adrenaline steels my heart. I won’t be shaken by the likes of him.
There’s a bell ring. The match has started.
Anderson holds out his hand. He wants to tap gloves. It’s a show of respect—of brotherhood camaraderie. Not every fighter wants to do it, especially not with me, a guy they barely know, but I always appreciate it when someone offers.
I hold out my hand and step forward.
And then Anderson throws a punch inches before we tap gloves. I step back, dodging the blow.
A roar of excitement washes through the crowd. The announcer says something, no doubt about the treachery, but the pounding of my heart deafens me to everything.
Anderson steps forward for a follow-up strike, but he has a predictable fighting style. I saw it in all the videos. I rush in and punch him across his face, my knuckles cushioned by the gloves, though I still feel the undeniable sensation of hitting bone square on. He stumbles back, and I go to throw a left hook. Anderson lifts his arm, blocking his face. I strike his elbow and jump away, satisfied with the blow I landed.
His eyes take a second to focus. I rattled him good.
I take in a deep breath, and it’s like swallowing raw power.
This is it. The intensity. The bloodlust.
I want to destroy my opponent. I want to prove I have the potency—the strength—to stand amongst the greats of the world. If our lives are fleeting, if we’re nothing more than stars in an endless ocean of darkness, I want to flicker just once before fading away. I want to feel as though I’ve made an impact on the world. I’ve made a name for myself. I’ve accomplished. I won where others failed. I succeeded where others gave up.
Nothing tastes as gratifying as victory.

Anderson throws a kick. I sidestep away. He throws a second kick, too fast and too reckless. I catch his leg, getting him off-balance, and then I toss him to the mat. The slam rocks the octagon and the audience. Cheering cuts through my focus for a brief second as I stand over Anderson and punch downward, pile-drilling home a heavy blow. I bust his nose, and blood explodes across his chin.
I punch again, splitting open his eyebrow. I go to punch a third time, ready to end this fight, when he strikes my right shin.
Fire flares to life under my muscles, flooding my leg with agony.
Anderson didn’t punch hard—it’s the same pain from the other night.
I leap away from Anderson and stagger backward, my adrenaline waning. The crowd and announcer seem louder than before. People scream and yell. My name. Anderson’s name.
“Why’d you stop?” Derek shouts. “You had him on the ropes. Push! Push!”
Derek doesn’t know about my leg. And why would he? There’s no mark or bruise. I had almost forgotten it hurt. Even now, the pain has subsided, but the brief graze almost had me tapping out. I can’t let Anderson hit me there again. I need to end this fight fast.
Anderson gets to his feet. His face looks like a mudslide, blood weeping into one eye.
But he doesn’t look confused. He might have seen my grimace when he struck my leg.
Anderson rushes forward and sweeps with a low kick, straight for my shin. I dance away, my breathing heavy. He knows.

S.A. Stovall relies on her BA in History and Juris Doctorate to make her living as an author and history professor in the central valley of California. She writes in a wide range of fiction, from crime thrillers to fantasy to science-fiction. Stovall loves reading, playing video games, entertaining others with stories, and writing about herself in the third person.