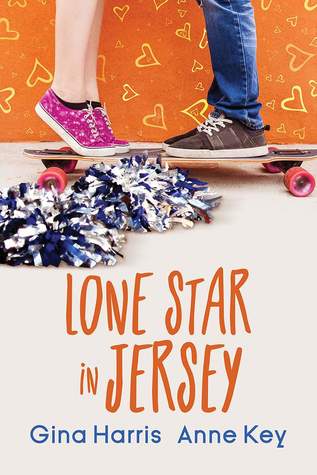 Eli faced the fallout of returning to school after his transition, and now he’s starting over in a new school where no one ever knew him as Elizabeth. The best thing about this new beginning might be the girl in the bedazzled Keds.

Sammy’s world of cheerleading, advanced math, and popularity in her Texas high school crumbles with her mother’s death. She’s shipped off to New Jersey to face a father who feels like a stranger and a world where she doesn’t feel like she belongs. At least there’s Eli, the cute boy who is also new at school.

As their friendship deepens and romance begins to bloom, Eli knows he owes Sammy the truth. He hopes he can trust her, and Sammy hopes she can understand falling in love with a trans boy. It’s a lot to deal with alongside the long-buried family secrets coming to light, and neither of their worlds will ever be the same. But maybe building new lives won’t be so hard if they do it together.

Dos Salsa’s Tortilla Soup -- OMG y’all! It’s the best -- spicy but not WHOA spicy. Cheap. Free chips and salsa. YUM.
Chocolate Pie at the Monument Cafe. First, totally worth the calories. Second, PECAN CRUST.
Grits from the HEB. They’re the best. Even my momma couldn’t mess them up.
Salt Lick in Round Rock -- I like to sit outside and breathe. I’m pretty sure if I walked in, I’d gain ten thousand BBQ pounds.
The fried pickle spears at the Burger University. Crispy dilly goodness, y’all.


Pizza! NJ is known for the “tomato pie”, which is basically upside down pizza - the cheese first, then the toppings, then the tomato sauce, which is usually a little chunky and sweeter than a New York sauce. Sounds odd if you’ve never had it, but it’s so good.
Philly Cheesesteak, which is every bit as good in NJ as it is in Philadelphia. Saute some mushrooms and sweet onions to put on it. Yum.
A Fat Johnny from RU Hungry. Cheesesteak, chicken fingers, mozzarella sticks, turkey bacon, onion rings, marinara, french fries. That’s all on one sandwich. Yeah, really. If you don’t like the sound of that one, there are 32 more you can choose from. t will feed you and a friend for $8. And you’ll be stuffed.
Diner matzo ball soup. Any diner, they’re all over. Usually the matzo balls are enormous too.
Disco fries! Mmm. French fries and brown gravy. Sometimes with cheese sauce or mozzarella. So good.

Gina Harris: is caffeinated. When she’s not drinking coffee, she is on the beach or in a boat. Occasionally she can even be found writing. Gina holds a Bachelors in Theater Arts from Rutgers University so, as an author, her strength lies in creating relatable, human characters who are flawed, but step up when you need them most. That unassuming but brilliant girl in your math class. The shy boy who is fantastic on his skateboard. The best friend that doesn’t need to ask because he just gets you, and the new friend that wants to be something more.

Gina is the author of I Kiss Girls, a sweet YA romance about a lesbian girl in a small, suburban town whose best friend, a straight guy, always gets the girl — until one day, he doesn’t. Gina lives in the suburbs of New York City with her wife and children.


Anne Key: Anne Key recently left her beloved Texas and now lives with her amazing wife in the New Mexico mountains, spending her time writing the kinds of books she wants to read, playing with her basset hounds, and making stuff that wants to be art when it grows up. She’s been writing and illustrating for decades, exploring media from poetry to sculpture, from romance novels to weaving.

She believes in ghosts, in cowboys, in forgiveness, in happily ever after, in magic, and in love at first sight. Mostly, she believes in experiencing your own personal joy wherever you can.