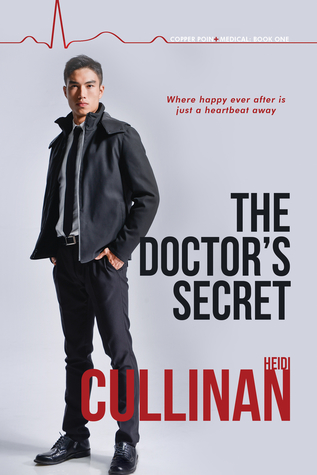 Thanks for having me today! This series has been a long time coming, so it’s a litte crazy that it’s finally here! Here’s an excerpt of The Doctor’s Secret to give you a taste of the story. Hope you enjoy it!

No one had told Simon the new doctor was beautiful.
He hadn’t wanted to drive the hour and a half from Copper Point to Duluth and back again to pick up the new surgeon, especially when he’d been asked at the last minute during an extended shift. He’d worked odd hours seven days in a row, and then they’d wanted him to fetch the doctor everyone had been raving about as if he were some kind of second coming for St. Ann’s? It wasn’t as if Simon could refuse, though. Erin Andreas, the new human resources director and son of the hospital board president, had asked him personally.
“It’s fitting for the surgical nurse to pick up the new surgeon, don’t you think?” Andreas had punctuated this remark with a thin, apologetic smile. “I’d originally planned to go myself with a team of physicians, but everyone was summoned for call, and I have an internal crisis I need to deal with. So, if you would do this for us, please.”
He hadn’t waited for Simon to agree, only given him directions on when and how to meet Dr. Wu. He’d also sent along another copy of what Owen called That Damned Memo, the one reminding everyone of the strict new penalties for dating between staff members. Simon had no idea if Andreas meant it for him or for the new doctor.
As he clutched his hastily cobbled welcome sign, his pulse quickening with each step the surgeon took closer, Simon decided he’d definitely been the memo’s intended target. Dr. Wu could have starred in an Asian drama, he was so beautiful. In fact, he looked a lot like Aaron Yan, one of Simon’s top five favorite DramaFever stars. He was also tall. Simon wasn’t particularly short, but he was compared to Dr. Wu.
Tall. Handsome. Chiseled. Short black hair, not dyed, artfully styled into messy peaks. Dark eyes that scanned the airport terminal with sharp focus, then zeroed in on Simon. A long, defined jaw lightly dotted with travel stubble below the most articulate set of cheekbones Simon had ever seen.
I’m going to work beside this man every single day. Hand him instruments. Follow his every instruction. Except if he smells even a fraction as good as he looks, I’m going to pass out in the OR before the patient arrives.
Mentally slapping sense into himself, Simon straightened and smiled, holding his sign higher as the man approached. “Dr. Wu? Hello, and welcome. I’m Simon Lane, the surgical nurse at St. Ann’s Medical Center. It’s a pleasure to meet you.”
Dr. Wu accepted Simon’s hand, but he also looked around, searching for something. When Simon realized what it probably was, he lowered his gaze, his cheeks heating.
“I…apologize that it’s only me here to greet you. We’re a small hospital, as you know, and the team members who planned to greet you were all called away on emergencies. I hope you’re not offended.”
Wu cleared his throat, not meeting Simon’s gaze. “Of course not.”
Simon was sure Wu was at least a little offended, which made Simon feel bad, but it wasn’t as if the man didn’t have a right to be upset. It was also pretty much on par for the administration to shove a nurse into the middle of its mess to take the heat for a mistake he had nothing to do with.
This wasn’t the time to feel sorry for himself or sigh over the man. Dr. Wu had traveled a long way and deserved some professionalism. Forcing a smile, Simon gestured to the hallway. “Shall we collect your luggage?”


Wu adjusted his shoulder bag and nodded, setting his jaw. “Please.”
They walked in silence to the baggage claim area, where the rest of the flight from Minneapolis was already gathered, for the most part. An elderly woman in yellow, surrounded by children and adults, waved at Dr. Wu as he passed, and he waved back. Simon almost asked if it was someone the surgeon knew, decided that was a stupid question, and kept his focus on the matter at hand. Professional. Be professional.
“It says your bags will appear at the second claim.”
Dr. Wu glanced from side to side, then raised his eyebrows in a look of quiet disdain. “Well, if not, there are only the two.”
Simon followed his glance. “I guess there are. I never thought about it. I haven’t been to any other airport baggage areas. I haven’t so much as been on a plane, myself.” Realizing he should probably not have said that, he rubbed his cheek. “Sorry, I didn’t mean to give away that they’d sent the B-team to escort you. I may not know anything about the rest of the world, but I’m an expert on Copper Point.”
For crying out loud, Lane, the man is going to think they sent the village idiot to fetch him. Except even as he thought this, Simon noticed Dr. Wu was smiling a real smile.
It was gorgeous. If the man sent too many of those Simon’s way, he was going to need a cardiologist, not a surgeon.