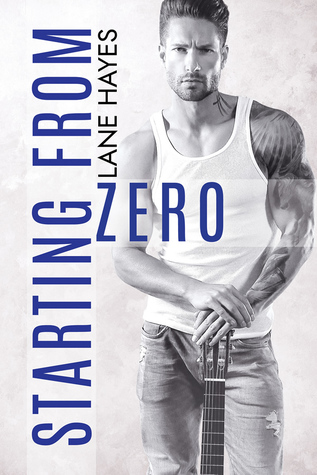 New series from Lane Hayes! "Starting from Zero" is the first book and sets the stage for the rest. With a host of interesting characters, complicated relationships and a band just starting out we are sure to get more books set in this social circle!

Justin is fresh out of a relationship - well it's been six months but the animosity between him and his ex will make you think it's barely been 24 hours. He's crashing on his best friend's couch and on top of all that his band doesn't show any signs of hitting fame any time soon. When the band gets a call to perfom at a local dive bar he thinks they're finally going to catch a break. Until it becomes apparent that their invitation was just for show. An effort to create drama between him and his ex to bring publicity to the venue and to further his ex's career.

After a spectacular fight with a previous bandmate Justin meets a handsome older stranger and they hit it off. They spend some time talking, creating some mystery by not sharing anything personal about who they are and they end up hooking up in the bathroom of a hotel bar. Though they can both feel the connection they part ways without making plans to keep in touch.

Gray is a very successful songwriter who prefers the company of his quitar and his vinyl discs to going out. He has formed a family with his best friend, Seb, and his godson, Charlie, and even though his relationship with Seb is complicated he is happy to have them both. After meeting Justin he can't get their night out of his head but he also doesn't do anything about it. Thanks to some meddling people around him they cross paths again and this time there are no secters about who they are. The connection they felt is still there and this time they have all the time in the world to explore it.

When an offer to write a song lands in Justin's lap he cautiously agree to work on it with Gray and that brings them even closer together. As they spend weeks doing research, brainstorming and composing they begin to fall for each other.

Justin is an interesting character, charming and very self aware. He knows his strengths, his limits and his weaknesses. He is loyal, down to earth and very passionate. Gray is a cool guy that hides a music nerd inside. He is logical, supportive and family-oriented. He adores Charlie and no matter how many times he becomes exasperated with his antics, he always looks at him fondly.

Gray is eigthteen years older than Justin but that was never a problem for them. The only problem was their financial and societal differences that made people suspicious and judgy of them being together.

The secondary characters were a mixed batch. Some of them were very present, had distinct personalities and strong backstories and some of them were barely there, like an afterthough. Maybe that was deliberate because now I want to know the stories for some of them but I'm not overwhelmed by all the possible future stories. We get to pace ourselves and get to know the rest of the band later on.

I hope Tegan's story is next but I'll read the next book(s) no matter who it's about!


*A copy of this book was kindly provided to me in exchange for an honest review. *