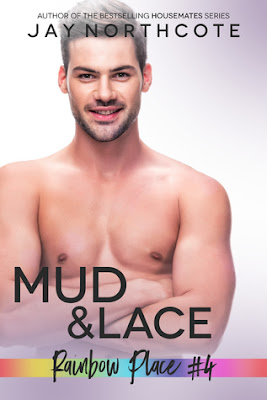 Mud & Lace is aptly titled. Simon (Wicksy to his mates and Cam's best friend from book 2) is a rugby player; he's masculine and likes to get dirty. When Simon sees the stunning Lady Gogo, he can't look away.

Charlie (aka Lady Gogo) loves to explore his feminine side. Drag makes him brave and bold. He can embrace the Lady Gogo persona without shame. He just wishes he could do the same when he's not in costume.

Simon understands that Charlie is a man, but Simon loves the feminine, so Charlie as Lady Gogo, with lipstick and lacy panties, does him in. As Simon and Charlie spend more time together, Simon starts to think of Charlie as a "he" versus a "she" and begins to question his own sexuality (is he bi? pan?).

Meanwhile, Charlie wonders how "girly" he wants to be. Is he transgender or gender fluid? Jay handles these topics with sensitivity and grace.


The sex scenes in this book are kinky and sensual. The MCs have a real connection that moves beyond gender.

I loved the secondary characters, including Simon and Charlie's awesome moms. I understood Simon's fear of changing the way everyone perceived him, but I also got why Charlie didn't want to be anyone's dirty little secret.

The ending is a HFN, appropriate since Charlie is 20 and Simon is 24. I would have liked an epilogue set further in the future, but I very much enjoyed this story.