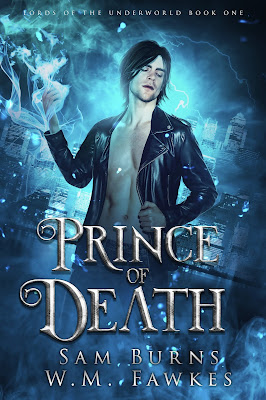 Gifted power over life and death, Lysandros has spent millennia in the underworld, listless and alone. The youngest child of Hades and Persephone, he’s been sheltered from the threats in the world above.

Theo Ward hasn’t been so lucky. After watching his mother wither away, he’d do almost anything to have her back. When a messenger appears at the Banneker College of Magic and offers the young professor a chance to save her, Theo can’t pass it up, even if it means going straight into the underworld and dragging her home. But Theo gets more than he bargained for when he crosses paths with the prince of Hades.

Set against the king of Olympus, they must shed their past burdens and learn to trust in each other, so they can face down a storm that threatens to wipe the nation’s capital off the map.

What a whiplash of entertaining fantasy material. Just imagine today’s London with some schools teaching magic…Yes, we already digress from contemporary.

In one of them, there’s a nice but reserved teacher competing for his position, spending his evenings reading books and feeling lonely now that both his mothers are dead. Until one day, he climbs into a subway carriage and ends up in the “underworld” where he meets some characters from the Greek mythology…yep, we are definitely into fantasy.

In a world divided between earth and below, the sky and the sea, we get to follow Theo, the teaching mortal and Lysandros, the scarred prince of the underworld, staying as far away as he can from the shenanigans of the gods and their companions.


And while Theo and Lysandros can’t help being curious and attracted to each other, they not only have to deal with their differences on so many levels, they also have to deal with some plots and some danger upon Theo’s world.

I couldn’t help being fascinated by the world building created by the authors, inspired by Greek mythology, and the London sense of place, nor could I help rooting for our two MCs, so different but fitting so nicely.


Despite this subgenre in MM romance is not my favorite, I was curious about how the authors would unravel the plot and how the relationship between Theo and Lysandros would “heroically” pan out. Even if it felt of bit rushed sometimes, and with some very convenient twists, it was nicely entertaining and with enough hotness to make it an enjoyable read for me. Another good notch in my incursion into fantasy MM romance.


W.M. Fawkes is an author of LGBTQ+ urban fantasy and paranormal romance. With coauthor Sam Burns, she writes feisty Greek gods, men, and monsters in the Lords of the Underworld series. She lives with her partner in a house owned by three halloween-hued felines that dabble regularly in shadow walking.