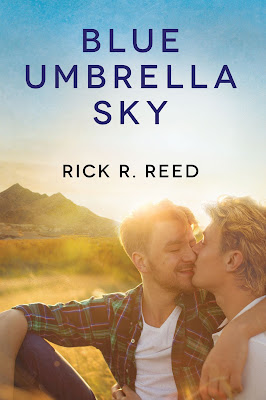 Milt Grabaur has left his life, home, and teaching career in Ohio to start anew. The Summer Winds trailer park in Palm Springs, butted up against the San Jacinto mountain range, seems the perfect place to forget the pain of nursing his beloved husband through Alzheimer’s and seeing him off on his final passage.

Billy Blue is a sexy California surfer type who once dreamed of being a singer but now works at Trader Joe’s and lives in his own trailer at Summer Winds. He’s focused on recovery from the alcoholism that put his dreams on hold.

When his new neighbor moves in, Billy falls for the gray-eyed man. His sadness and loneliness awaken something Billy’s never felt before—real love.

When a summer storm and flash flood jeopardize Milt’s home, Billy comes to the rescue, hoping the two men might get better acquainted… and maybe begin a new romance.

But Milt’s devotion to his late husband is strong, and he worries that acting on his attraction will be a betrayal.

Can they lay down their baggage and find out how redemptive love can be?

Blue Umbrella Sky is about starting over in a new place. And sometimes, making that change can mean throwing caution to the wind and just doing it—like my main character Milt Grabaur does here, at the luncheon following the funeral of his beloved husband, Corky.


“Palm Springs has three hundred and fifty days of sunshine a year,” Milt blurted out.

Dane followed Milt’s gaze to the window—the snow falling fast, the edges of the glass etched with frost. “Sounds wonderful.” He ate a few bites of pasta, then said, “Wait. You’re thinking of moving out there? To Southern California?”

Truth be told, Milt hadn’t seriously considered it until right this very moment. In the last months of Corky’s decline, when autumn was morphing into winter, with its sleety gray skies and bare, leafless trees, he’d imagined, in a vague way, a place that was sunny and always warm. Maybe oceanfront on the Gulf coast of Florida. Naples was nice. Or maybe he could become an expat and get himself down to Mexico and the Yucatán peninsula. He and Corky had had one of their best vacations ever there, renting a beach house in the little village of Puerto Morelos. All they did was lie by the pool, drink margaritas, make love, walk hand in hand on the beach, and read a book a day. Heaven.

In the lobby of the nursing home, just before Corky passed, Milt had picked up an old issue of Travel and Leisure magazine, drawn by its cover—a field of Joshua trees with a range of rusty mountains, rocky and austere, rising up majestically behind them to meet the electric blue sky. Milt thought the trees looked like something out of Dr. Seuss. The magazine had contained a story about Palm Springs and the desert—the beauty of the area and the abundant sunshine, its spiritual presence. There were dazzling photos of sun-drenched mountain ranges, cacti, vibrant desert blooms, and blue skies, nothing but blue skies….

He’d set the magazine down when an aide came to tell him Corky was awake and would he like to see him?

He hadn’t thought anything more of Palm Springs until this very moment. But the thought had stayed with him, tucked away in his subconscious until today, when he realized, in his grief, that despite being devastated by a crushing loss, he was also free.

And now, seeing that article seemed very much like fate.

“Yeah,” he said, his voice becoming more confident and convinced as he went on. “Yeah, I am. If I can make the finances work, I just might move out to Palm Springs.” Another notion seized him. “Maybe take an extended sabbatical and write that novel I’ve always considered doing.”

A vision rose up in Milt’s mind’s eye—a dusty, rock-strewn trail, the earth beneath his feet sun-washed, ochre, heading upward, the side of a blue-gray mountain. A relentless sun beat down, making each step both effort and joy, making his heart pound in his chest, reminding him he was alive.

His vision stopped when Dane’s husband, Seth, with his curly-haired handsomeness and winsome smile, interrupted. He sat down at the table with a paper plate loaded with chicken breasts and pasta, and Milt hated him for just a moment—to be able to eat like that and maintain what was obviously a thirty-inch waist.

He smiled at Milt and gave Dane a little wink. “What are you two talking about?”

Dane spoke before Milt had the chance. “Milt here is moving to Palm Springs.”


They were quiet for a moment, and Milt was certain that Seth thought his husband was kidding around. Nothing much ever changed in Summitville. And teachers certainly didn’t leave Summitville High midterm to hightail it off to Southern California.

When no one picked up the conversational thread, Seth wiped his mouth with a paper napkin and caught Milt’s eye. “He’s fucking with me, right?”

And for just a moment, the idea did seem absurd, a flight of fancy, something one would think of in the midst of emotional trauma, but with the passage of time would come to seem like a silly notion.

Maybe when it was time to retire he could move out there, get himself a little casita with a pool.

Milt shook his head. No. The idea wasn’t the passing notion of a bereaved man. It had force. And even though Milt had yet to work out the logistics of what he knew everyone would view as a rash move, he felt deep in his gut: I’m gonna do this.

This is my second read from Rick R.Reed and just like the first time, I was surprisingly moved, in a good way, by this very slow-burn between Billy and Milt.

Milt is in his forties and decides to move to Palm Springs after losing his husband from an aggressive form of Alzheimer. Still mourning, he doesn’t realize that he doesn’t socialize anymore.

Billy is in his twenties and recovering from alcoholism with a sunny and positive, but not blind, attitude. And with that, he finally grabs the attention of Milt, his neighbour he has been eyeing with interest for several months.

There is no issue around the age-gap, nor steam, nor overdrama. No, this story has a “quiet atmosphere”, something I quite enjoy when well written, which is the case here for me. It’s centred on the journey that Milt and Billy take to at peace on their own and together. It’s full of reflection. It’s about grieving and remaining sober. There is some melancholy but also some hope and light.

As much as I was concerned before starting this read that it would be too gloomy, it was not and once again, Rick R. Reed captivated me with this story of two “ordinary” guys who so nicely compliment and find solace in each other. Four well-deserved flowers !!


ARC of “Blue Umbrella Sky” was generously provided by the author/publisher in exchange for an honest review.

Rick R. Reed draws inspiration from the lives of gay men to craft stories that quicken the heartbeat, engage emotions, and keep the pages turning. Although he dabbles in horror, dark suspense, and comedy, his attention always returns to the power of love. He’s the award-winning and bestselling author of more than fifty works of published fiction and is forever at work on yet another book. Lambda Literary has called him: “A writer that doesn’t disappoint…” You can find him at www.rickrreed.com or www.rickrreedreality.blogspot.com. Rick lives in Palm Springs, CA with his beloved husband and their fierce Chihuahua/Shiba Inu mix.