Jackson Meade was a shy, awkward kid just trying to survive a high school with too many bullies and too few friends. Now that he’s in college, his eyes have been opened to a whole world of possibilities, especially those regarding love and sexuality. However, he can’t enjoy any of it since he’s been separated from his best friend.

Blake Renault has been in love with his best friend almost since they first met. After escaping a bad family situation, he lived with Jackson and his mom for the last two years of high school, which made it much harder to keep his feelings a secret. Graduation brings lots of changes for the boys, including Blake moving to a different city to apprentice with a tattoo artist and Jackson going off to college.

Being forced apart after high school leads them to new revelations about themselves and their relationship. While Jackson questions whether his attachment to Blake is normal for best friends, Blake decides to risk everything and tell Jackson the truth. Jackson and Blake must figure out what they want from each other while the future of their deep friendship hangs in the balance. Will they find love, or lose everything?

The foam ball made a blunt thud as it bounced off the drop-ceiling tiles above me. My dorm room was like an acoustic black hole—it pulled everything outside into it, then trapped it here. Every sound I made inside was muffled and dull, and every sound from outside came right to my ears, clear as a bell. It was maddening as hell, and not very conducive to productivity, but perfect for brooding.

It was my first week at Arden College. My first week alone… It had only been a few days since my best friend Blake dropped me off. He’d somberly helped me haul my crates of crap up the stairs to my brand new-old room. The elevators had been shut down because maintenance had believed the strain of carrying all the belongings of all the residents up and down in one day would cause them to break. So up and down we all had walked…grudgingly. Repeatedly.

Blake leaving had felt like my right arm being torn from my body. We were that close. We’d only known each other for a fraction of our lives, but Blake had lived with my mom and me during the last two years of high school, so we were rarely ever apart. And then graduation happened. And college.

I wasn’t going to go alone; I’d told him I wouldn’t. He’d begged me, and finally resorted to threats. Said he’d disappear and never come back, so I’d be staying for no reason anyway. I knew he wouldn’t do it, but it let me know how serious he was about me not fucking up my future for his sake. He could be stubbornly paternal sometimes, when it came to stuff like that—we’re working on it. So we’d packed my meager possessions into my too-janky-to-be-real pick-up truck and driven to Arden.

When we’d finally finished, and it was time for Blake to leave, because the school didn’t allow overnight guests during the first semester of a student’s freshman year. I struggled not to cry at first, but he’d just pulled me into one of his patented giant bear hugs and held me close while I sobbed all over his favorite Saints jersey. He was the only one in the world besides my mom who was allowed so close to me, who was able to touch me like that. And he was leaving. What would I do now?


Letting the stupid ball fall to the floor, I dashed my hands across my wet cheeks and cursed a blue streak that was promptly absorbed by the cinderblock walls. How the hell was I going to do this by myself, without my other half? I felt like I was slowly dissolving, becoming a shell of myself that drifted through life, waiting to be blown away by a stiff breeze.

Suddenly the thick walls of the tiny room felt like they were closing in on me. My chest constricted with claustrophobia, and I knew I had to get out of there before I went crazy. My data structures and algorithms class started in about an hour, so I could just leave early. I dressed quickly and threw on a light jacket before grabbing my backpack and bolting out the door. The thought of being inside the elevator made my skin clammy from imagined claustrophobia, so I took the stairs two at a time.

I practically spilled out the front door of my dorm, and it was all I could do not to roll around in the grass because I was so happy to be outside. I’d always had anxiety, but the claustrophobia was newer. I walked through the Arden quad, alone in a sea of students streaming down the sidewalks on their way to class. It was a different kind of invisible than I’d been in high school. Back then, I was invisible because of who I was, or more accurately, who I wasn’t, and how I just didn’t rank on the high school scale of importance—although I’d never quite figured out the criteria for that system. No, being invisible on a college campus, where everyone was doing their own thing, worrying about their own lives instead of what people were wearing or where they lived or who they were friends with, was wonderfully freeing. It was like I could finally breathe after being strangled for four years.

But I was still unbearably lonely without Blake. I wasn’t putting my whole self into this college-life thing because all I really wanted was to drive to Atlanta and camp out on Blake’s couch. The saner part of my brain knew I had to be responsible and shit, get an education so I could do what I wanted with my life. The childish part of my brain made me want to stomp my feet and cry. Either way, I wasn’t meeting people or going partying, all the things people expected to do at college, because I was spending all my time wishing I was somewhere else.

Lost in thought, I rounded the corner of the comp-sci building on my way to the front door, and I ran smack into someone. I fell hard on my ass and was showered with books and papers, presumably from whomever I hit. On the grass in front of me was a pretty Asian girl with shoulder-length, wavy, dark hair and a severe slash of bangs across her forehead.

And she was glaring at me like she could explode my head by sheer force of will. I hastily stood and held out a hand to help her.

Once she was back on her feet and brushed off, I started collecting her books and papers. Then I noticed the spilt coffee seeping into the ground from the paper cup she’d been carrying—oh, hell, coffee foul.

“Shit, I’m doubly sorry. I’ll get you a new coffee,” I said, handing the stack of books back to her and silently wondering why she didn’t use a backpack.

When she took her things, I picked up the empty coffee cup and tossed it into the recycling, then stuffed my hands in my pockets and faced her. Though she barely reached my shoulders, she was kind of intimidating somehow.

She sighed and shifted her books to her left arm. “It’s fine, no harm done except to my caffeine level.” Her bright red lips turned up in a small smile.

“I meant what I said… If you’ll tell me where the coffee shop is, I’ll get you a new one.”

She glanced at the computer science building, then back at me. “You have class here?”

I followed her obediently, happy she hadn’t punched me for slamming into her. She was actually really pretty in a kind of nerdy, eclectic way, with her cat-eye glasses and baggy sweater over leggings that looked like paintings of a galaxy.

“Daisy Chen,” she tossed over her shoulder. “Nice to meet you, Jackson Meade. I think we’ll be friends…assuming I’m properly caffeinated soon.”

It was kind of presumptuous of her, considering I hadn’t felt at all like making friends since I got to school, but I got the feeling it might happen whether I liked it or not.

“What’s your major?” Daisy asked as we walked back toward the computer building from the coffee stand with lattés in hand.

“Same, minus the indecision,” she said in a censuring tone.

I ducked my head and looked away. Who said I had to have everything figured out first semester of freshman year?

“So what class are you going to now?” she asked.

“Yep.” Wow, I was a stunning conversationalist.

“I guess we’re in the same class then.”

I could feel her gaze on my profile as she studied me. It made me vaguely uncomfortable, like an animal behind glass at the zoo. My sweaty hands tightened on my backpack straps.

“You’re kinda cute…” she finally said, making me choke on my coffee. “We should go on a date.”

Who was this creature and why was she so embarrassingly direct? “Um…”

“How about tomorrow night?”

I tried to drum up some enthusiasm for finally being asked out, but all I could feel was that same empty ache.

“I can’t tomorrow. I have a… Well, it’s my best friend’s night off, and since he lives in Atlanta, we always talk on the phone when he’s off… I…sorry.”

She shrugged like she hadn’t a care in the world. “That’s okay. How about Friday night? We can go to the campus movie theater. It’s really cheap.”

I couldn’t think of a good reason or a polite way to refuse. “Okay. That sounds okay.”

“Don’t die of enthusiasm or anything,” she said in a voice as dry as toast, but she didn’t sound offended.

I laughed and opened the door for her, and we headed to our class. As we made our way to the second-floor lab, I wondered how in the hell I’d ended up with my first college date. 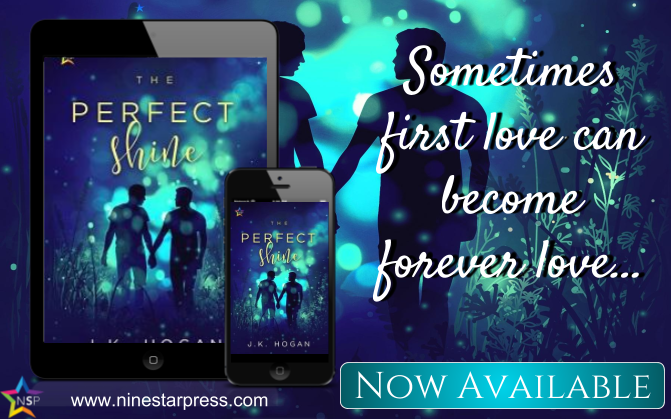 J.K. resides in North Carolina, where she was born and raised. A true southern girl at heart, she lives in the country with her husband and two sons, a cat, and two champion agility dogs. If she isn’t on the agility field, J.K. can often be found chasing waterfalls in the mountains with her husband, or down in front at a blues concert. In addition to writing, she enjoys training and competing in dog sports, spending time with her large southern family, camping, boating and, of course, reading!