Release Blitz: The Demon Lord Of California by Jeanne Marcella 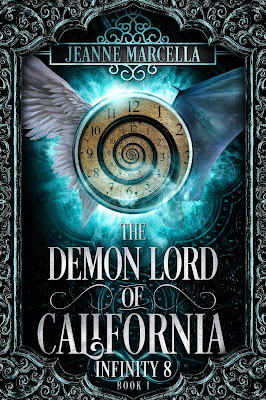 Calico Winghorse has no choice but to flee to the plane of existence called Earth. His great grandfather, suffering from a terrible curse, strips him of his psychic abilities and nearly murders him.

As a mixed-blood phoenix concealing himself in human form, Calico first settles in England, then in the San Francisco Bay Area. In order to make a living, he opens a small bakery and quietly licks his wounds.

But just how Calico escaped his childhood home—via interdimensional portal—is the very reason why he’s drawn the unwanted attention of Infinity Corporation.

Representing this angelic-run company is Agustín Chávez de la Cruz, the Demon Lord of California. Even though Agustín is IC’s heir, he finds himself demoted from his daily duties for a new assignment: take absolute control of Calico’s portal.

Calico and Agustín’s first brief encounter ignites sparks of attraction. Their second is highly explosive, bogging down initial communication with innocent mistruths and a healthy dose of fear.

As Agustín struggles to restore trust, Harper, the demanding head of IC interferes, further complicating matters. With negotiations slowed, Calico and Agustín realize they both wish to establish more than just a business deal.

However, until the extensive and brutal psychic injuries Calico received from his great grandfather are healed, the portal remains vulnerable to the darker forces that want it at any cost. Agustín will have to push both his angelic heritage, and his psychic powers to the very limits to mend someone who bears more than celestial blood, but who is also the god of space and time.

And the clock’s ticking.

Jeanne Marcella was born and raised in the San Francisco Bay Area. Granted unlimited access to books at a very early age via the library, she quickly acquired a fondness for creating her own stories through word and drawing.

She writes queer dark fantasy not for the faint of heart, and fun (but sometimes gritty) urban fantasy soaps, all with romantic elements.