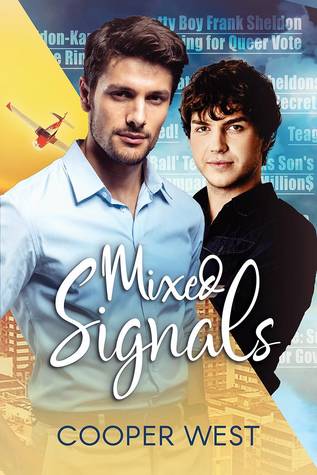 Devastatingly handsome pilot Frank Sheldon is doing his best to avoid his inheritance of money, charm, and good looks by rebuilding his life on his own terms after being discharged from the Air Force just before the repeal of DADT. When he unexpectedly meets the eccentric geek Benjamin Kaplan, sparks don’t quite fly, despite Benjamin’s obvious interest. Frank is not one to back down from a challenge, but what does any of that have to do with his sister’s campaign for governor, or the muckraking political website attacking her opponent, who just happens to be Frank’s unlamented, very closeted, ex-boyfriend? It’s hard to fall in love when all you are getting is mixed signals!

My latest release, Mixed Signals, is a fun, contemporary M/M romance about two guys who are not quite sure what they are doing, and are pretty bad at doing it. I had a blast writing it, if you can’t tell!

One of the things I enjoy most about writing stories like this is making the characters both romantic heroes but believably real people too. Frank Sheldon was particularly challenging to write because on the surface, he has everything: good looks, money, and a loving (if annoying) family. What’s believable about that, amirite? Ha! So yes, it was interesting to fiddle with his motivations and personality. Likewise, Benjamin Kaplan had his challenges in store for me too. He’s a bit obnoxious and arrogant, so it took a while to unravel his heart of gold. Along the way, I got inspired by things I had not expected to be a part of the story at first:

I hope you give the boys a try! I think they are both adorable and interesting guys, and were a lot of fun to write. Mixed Signals is on sale now through your favorite book seller. Let me know what you think!

Busting out of the fanfiction scene in 2012 with the publication of her first original full-length book, Dawn in the Orchard, Cooper West writes stories that capture the heart and imagination. She is now known for her bestselling book The Protector, set in her unique Guardsman’verse of weredogs and bonded pairs, and plans to continue to release more books in that series but also enjoys writing modern, quirky contemporary romance stories.

She’s still a fangirl at heart, with an everlasting crush on Chris Evans and an ever-rotating list of OTPs. Bisexual and raised in a queer household, Cooper has been writing “slash” since she was a teenager and did not understand much about biology. She’s learned a lot since then! *wink wink nudge nudge*