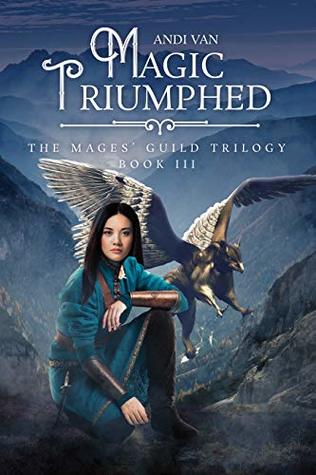 Zaree Muna would follow her brother Tasis anywhere, but she never imagined that path to lead where it has. After Tasis and his familiar fall under a magical sleep from which no one can wake them, she and her party prepare to face the mad king of Archai without him. They don’t expect the journey to lead to the Maker herself, who predicts three deaths will occur as the battle to save their world from Archai and a jealous god nears. Two of those deaths will be loved ones, and if things go wrong, the third death could spell the end of everything.

But no one ever accused Zaree of being a coward, and as she and the others go into battle to save what Tasis has rebuilt, she is ready to laugh in the face of death. The thousand-year wait is over, and none of them will accept anything less than triumph.

“Write me a story with a dragon.”
You never think that a single sentence could change things so drastically. Or at least I don’t. But in 2007, when I decided to participate in this thing I’d heard of called NaNoWriMo, that’s exactly what my grandmother told me when I called her to tell her I had no idea what kind of story to write.
So I wrote her a story with a dragon. That was in 2007, mind you, and the original iteration of Tasis’ story was only one book long and badly written in places. Especially the ending. The ending was horrible. But I was lucky enough to have a chance to fix that, to expand my fictional world into an entire universe.
And hey... I wrote a story with a dragon for you. I hope you like it.
You can follow along with the blog tour. Since the dragons are what started this whole mess (both in reality and in the story), it’s the dragons I’ll be talking about for most of the tour. Keep your eyes peeled for a random giveaway or two!
So let’s start with Vashk, since he’s the first dragon we meet in the series. And because I’ve been asked about pronunciations before, I pronounce his name with an “ah” sound.
Vashk is referred to as the spirit of the western sea, though it’s very clear that the dragons are more than mere spirits. He’s a sea dragon. He has no front arms. Picture a wyvern, which is a type of dragon who traditionally has only hind legs and a set of wings. The wings function as arms and hands, of a sort. But with Vashk, his wings have adapted to his environment. What would have been wings are lower, where they can be used as fins to move about in the ocean. Unlike the wyvern, he has no hind legs, only a tail much like his merfolk. No need for legs if you’re not going to be walking about, after all.
Yes, I put that much thought into it. This is what happens when you come from a family of scientists.
There’s mention in the story of Vashk having a secondary form, but unfortunately there was never really a good place to include it. His merfolk are based on his secondary form. At one point in the middle of a conversation with a friend, we realized that he probably looks like King Triton from Disney’s Little Mermaid, and we both ended up laughing so hard we couldn’t breathe. (I don’t remember why exactly it was so hilarious, but at the time it was a riot.) And so when Yldost mentions that Vashk is embarrassed by his secondary form, that’s why - because we were laughing about it when I decided what his other form was.
I wrote Vashk long before 2007. He was a character I used in some of the short stories I’d written about Triv when I was still in high school (yes, seriously - I once got an A in a creative writing class specifically because of Triv and Vashk), and I have a lot of love for him. I kind of want to give him his own book someday.
***
“Blast it, where is that girl?”
Trekelm stomped through the guild, his face a mask of irritation, and he was vaguely aware of people immediately moving out of his way. The girl knew it was time for her lessons, but she’d once again hived off so well that no one knew where she was. The only person who might have an idea was conspicuously absent as well.
However, that one person wasn’t immune to Trekelm’s bellowing. “Corrin!”
“Down by the beach, I think,” one of the newly promoted masters told him as Trekelm stormed by. What was the man’s name? Fear? No, Gyr. Regardless, the comment made Trekelm come to a stop.
“The beach?” Trekelm asked. “You’re sure?”

“Fairly sure,” Gyr said with a nod. “I saw him and the redheaded girl heading that way.” He grinned, the expression turning his otherwise stony face into the very picture of mischief. “They’re skipping lessons again? You could always make them dust the library. By hand. Without magic.”
Trekelm returned the grin. “I like the way you think. I’ll send them your way once I’ve found them.”
Gyr saluted, and Trekelm headed for the castle’s entrance.
Once he’d reached the edge of the sandstone cliff, he scanned his gaze across the shore. Eventually, he was able to make out two small figures.
And a dragon.
It had to be a dragon. The thing was in the water, yes, but it was massive, and it was leaning down toward Corrin and Trivintaie.
With a shout he launched himself off the cliff. He hated using the flight spells—he wasn’t very good with being off the ground, truth be told—but he had to keep that thing from eating his apprentices. Which meant he was more than slightly surprised when he was knocked out of the air onto the sand below, only to find Trivintaie standing over him once his vision cleared. She was glaring, her hands on her hips, her hair lashing about her in the wind.
Except there wasn’t any wind.
“Calm yourself, child,” a gentle, amused voice said. When Trekelm looked to see who was speaking, he was surprised that the voice came from the direction of the dragon.
“He was going to hurt you!” the girl insisted, turning to glare at the dragon. “I couldn’t just let him hurt you!”
“And I appreciate the gesture, but you shouldn’t have knocked him down like that. You could have hurt him.” The immense beast turned his attention, and Trekelm could have sworn it smiled at him. “Let me introduce myself. My name is Vashk. The girl you have named Trivintaie….” The dragon paused, wincing a little at the name, though Trekelm couldn’t understand why. “The girl is my student.”

Andi Van is a foul-mouthed troublemaker who lives near San Diego with a baseball bat that’s forever being used for things other than baseball, and a fondness for rum and caffeine (though not necessarily together).

Andi is fluent in three languages (English, sarcasm, and profanity), and takes pride in a highly developed—if somewhat bizarre—sense of humor.