Blogtour: I'm Not Who You Think I Am by Felicitas Ivey

I'm Not Who You Think I Am 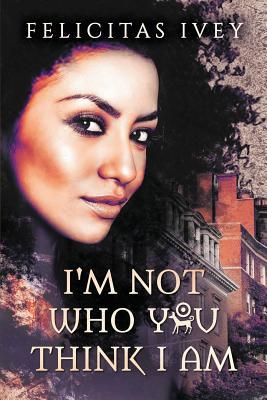 Mykayla's parents' marriage is in trouble, but they're working on it. Unfortunately for Mykayla, that means she's getting shipped off to Boston to spend her summer with Uncle Yushua while they work out their issues. Mykayla has issues of her own-like her confusion about her sexuality, or apparent lack of it-that she'd like to explore alongside her best friend, Xiu.The situation at her uncle's house is weird to say the least.

There's something off about his coworkers-aside from the fact that they won't go away. Things go from strange to stranger when a supernatural being shows up to protect Mykayla from someone he calls the Shadow Pharaoh. Sutekhgen is a sorcerer who never made it to the afterlife, with a huge Set Beast as a companion... and the mistaken assumption that Mykayla is the reincarnation of his lost romantic partner. She doesn't know what's worse: being caught in a metaphysical conflict between ancient gods or being stuck with a pushy jerk who doesn't know the meaning of personal boundaries.

Whenever I start these types of posts, I spend time debating what I'm going to write. Mainly because I don't know what to say, because I don't know how much of my personal life I want to write about. My bio covers the basics of my life, mostly, and I don't want to overshare on the Internet. Basically I have a day job, which supports the three cats which own me.
Cats and writers go together like wine and cheese. Most of the writers I know have a cat or two as part of their family. And all those cats are spoiled rotten replacement children.  I grew up with cats, and except for an odd week or two, I've never been without one in my life. So here are some of the more memorable cats I've lived with and how they've come into my life.
Devilkitty Smaugu-Smaugu was my husband Russ's fault. And everyone in the family was very quick to remind him of that when he complained about him!  Russ had made the foolish move of mentioning to me that there was a stray kitten at work one Saturday morning. The kitten was trying to get into the building he worked at MIT. I was a little worried, because it was one of the buildings on Memorial Drive and pictured an eventual flat kitten.
Russ worked third shift, so when he woke up that afternoon, I wrangled permission to find said kitten and I did. I picked up Smaugu as he sauntered out of the bushes, complaining how long to took me to pick up.
The kitten started out with the name Smaug, after the dragon in the Hobbit, long before the live action movies had come out. He got the Devilkitty nickname after he levitated five feet in the air because the bag monster was going to get him (It had been attached to his tail somehow and was following him about before I untangled it).   Smaugu came about because all the anime I was watching at the time and the Japanese have a custom of adding vowel to the end of a name.
Smaugu lived a long and happy life before, passing away in his sleep after many years of dominating my husband, Russ. My cat population was down to none after that, so I was soon looking for new companions.
Tamazusa and Mason are sisters and my current owners cats. I've had them about eight years. Both are very demanding ladies and want my attention, lap and pets, whenever I'm home. I named them after two characters in my first novel, "Dreamlands" even though Mason is an elegant tuxedo lady cat and the character Mason is neither, while her sister is a sleek black car named after a sorceress.
I got the two of them from co-workers of my sister. They had who had an abundance of unfixed cats and needed to get rid of a few. They asked if my sister if I needed a cat, and after a couple of weeks of emailing and using my sister as a go-between, I chose the two I was interested in. To adopt them, I went one night to where my sister worked, because they all work the night shift and handed her two empty cat carriers To pass on to them. The next night I went back and before her shift, my sister handed me two full carriers. It's caused a lot of my friends to comment on the 'drug dealer' nature of my cat acquisition. I did think security was going to bust us, but it never happened.

Mason demands a lot of lap time from me and has a habit of clinging to my shirt, so I will cradle her like a baby.  That isn't conductive to getting anything done. Tamazusa is willing to sit beside me, but I can't leave any sort of knitting near her or she'll tear it apart with her back feet or chew on the yarn.  Sometimes both at the same time. Which isn't good for her or my project. They are my babies and I do spoil them, because I don't have any kids. The ladies were annoyed when I adopted a third cat, but soon welcomed him into their life.
Phoenix's, my third cat, is a mellow and adorable Ragdoll who I fostered when one of my student workers couldn't keep him any more, and eventually adopted him. My student swore up and down he was a gentleman and would cause me no trouble. Well... She wasn't too wrong about that.
Except for his habit of insisting on drinking water out of the sink. And wanting to play in the shower all the time when I'm taking one. But on the whole he's better behaved than Tamazusa and Mason. He doesn't get as much lap time as he deserves, I make it up with his grooming time. A Ragdoll is a high maintenance cat with all the brushing they need.  Ignoring the fur will lead to mats and then trips to the groomer. And he is the only cat who comes to the door and make sure that I've arrived home safely. One of the other two will wander into the kitchen to supervise the putting down of food, but then will wander out again.
Cats make the house more lived in. I'm one of those crazy cat people who have conversations with her cats, like they could answer me back. I've discussed plot points in novels, what to have for dinner (Mine, not theirs), and even what we were watching on TV that night with them.


For the record, all the cats aren't interested in what I'm having of dinner so long as I feed them first. They also have the worst taste in dry food, wanting the cheap brands and not that gourmet stuff. As for television, they like superhero shows and movies and do not understand my obsession with baking shows.

Note from the blog team: Tell us about your furry owners pets in the comments!

Felicitas is a frazzled help-desk tech at a university in Boston who wishes people wouldn’t argue with her when she’s troubleshooting what’s wrong with their computer. She lives with three cats who wish she would pay more attention to them, and not sit at a computer pounding on the keyboard. They get back at her by hogging most of the bed at night and demanding her attention during the rare times she watches TV or movies. She’s protected by her guardian stuffed Minotaur, Angenor, who was given to her by her other husband, Mark. Angenor travels everywhere with her, because Felicitas’s family doesn’t think she should travel by her lonesome. They worry she gets distracted and lost too easily. Felicitas doesn't think of it a getting lost, more like having an adventure with a frustrated GPS.

Felicitas knits and hoards yarn, firmly believing the one with the most yarn wins. She also is sitting on hordes of books, which threaten to take over her house, even with e-books.

Felicitas writes urban fantasy, steampunk, and horror of a Lovecraftian nature, with monsters beyond space and time that think that humans are the tastiest things in the multiverse. Occasionally there’s a romance or two involved in her writing, with a happily-ever-after.