Thanks for having me! I’m so excited to get to share some insight into the Hot Wire series in general and Backstreets specifically. Backstreets (Hot Wire #2) is a continuation of Peter Bauer and Nikos Petrakis’ story—a romance sparked between a career car thief and an honorable mechanic.

I truly believe the mark of any author is that we are all voracious readers and consumers of media long before we ever set pen to page (or fingers to keyboard, in this case.) The Hot Wire Series was birthed from my love of dark comedies, neo-noir thrillers, and HEA romances. I think the common thread throughout at least the latter two of those genres is strong characterizations.

So, that’s going to be the focus of this blog tour. Let’s spill some tea about my characters, lovelies. I’m cheating a little on this first post, because, while I am going to talk about Peter and Nik separately on this tour, I think their relationship is really what holds the Hot Wire series together and as such, it’s practically a character on its own. And boy, does it get tested in this book.

If you pay attention during the first book, you can see some cracks already beginning to appear in Nik and Peter’s fledgling romance. They are both kind of messes, and their relationship proper starts out of a one night stand, some desperation, and two people on the verge of metaphorically drowning just clinging to each other. Night Moves was all about these two men bonding over their similarities, while Backstreets is about them reckoning with their differences and their considerable respective hang-ups.

I think there is something lovely in that, as they learn to navigate the deeper feelings that are developing, and also try to transition into something that is healthier and less co-dependent.

“I suppose.” Nikos sighed. “I just worry about you; I love you.”

There it was again, the L word, explosive and undefused. It didn’t do anything to improve Peter’s mood.

Nik had first dropped this particular grenade in Peter’s lap two months ago. Nik had a bottle of wine with dinner and they’d gone back to the garage. It had been a perfect June night, mild with a light breeze, and they’d had the bay doors open. The radio had been pounding out the ending of Twist and Shout. It was after-hours, just him and Nik and the Camaro, when Nik had fucking ruined everything.

Nik was bent over the hood, topping up the washer fluid. Without warning, he launched into the casual argument they’d been having the night before. “Peter, look around you. You are here working on this beautiful vehicle, in this beautiful garage we own, on this beautiful California evening, next to, speaking frankly, a beautiful specimen of a man. And you are going to spit in the face of all of this beauty by telling me that George Harrison is your favorite Beatle?”


“He had the best solo career,” Peter defended, loosening the valve stem cap to fill the tire.

“This is outrageous.” Nik shook his head at Peter, but he was grinning. “If you do not change your answer to Lennon or McCartney in the next five seconds, you are dead to me.”

Peter looked over at him innocently. “Ringo Starr.”

“Fuck you,” Nik said good-naturedly. “Now you are just being deliberately contrary.”

“Come on, Nik, do you really expect anything else from me at this point?”

Nik laughed—a perfect warm sound that Peter would do anything to make happen for the rest of his life—and went back to work.

Elvin Bishop came on the radio next, crooning Fooled Around and Fell in Love. The organ rose to fill the space and on its heels the piano and the slide guitar. The effect was dreamy and full and nostalgic. Peter

was just messing around. Nik’s back was to him, his arm up to coil the washer fluid hose into place. Peter snagged Nik’s left hand out of the air, using Nik’s confusion to spin him around and under his arm in a caricature of a slow dance. Peter pressed a kiss against Nik’s gently parted mouth, reveling in his surprise.

Peter was going to go back to the tire after that, but Nik held him there. He locked his fingers through Peter’s, his right hand sliding to the small of Peter’s back. He glided Peter around in a tender circle on the concrete floor, unhurried and self-assured. Nik was actually a pretty good dancer once Peter let him take the lead. And anyone could have seen them from the street, but Nik didn’t seem to give a shit. Peter relaxed into it, a little breathless from the way Nikos was looking at him.

He swayed his hips into Nik’s, moving in a slow figure eight in time with the song. Peter shouldn’t have been surprised that Nik was good at this but he couldn’t help but be taken in by the wild romanticism, especially when Nik dipped him effortlessly on the guitar solo. He was graceful and strong and so fucking steadfast, everything that Peter had ever wanted. Nik’s face went suddenly soft and sentimental. Peter knew what was coming before Nik even said it. In spite of everything Peter felt right now, he silently willed him not to.

Nik did anyway. “You know that I love you, right, Peter?” He said it in a very Nik way: straightforward, matter-of-fact, no frills.

Peter had suspected it for a while now, but he still wished that Nik hadn’t said it out loud. Peter sighed. He liked Nik, he really fucking liked him. Hell, if Peter was being completely honest with himself, he probably loved Nik.

But he wasn’t ready to say it to him yet. Those three words put you all in; they made you weak and exposed and liable to get hurt. And Nik could fucking hurt him in a heartbeat already if he wanted to. Love...love could annihilate him. Peter hated how much he found himself craving Nik’s approval, his affection, his company. Peter couldn’t afford to give Nik the kind of power over him that came with knowing that Peter loved him too. It wasn’t a trust thing, it was a self-preservation thing.

Nik looked surprisingly at ease with Peter’s silence. “It is okay, you do not have to say it back. I just wanted you to know.”

“Thanks,” Peter had said lamely, pulling away too quickly as the song faded out.

Eight weeks later and he still hadn’t said the words to Nik yet. Peter felt guiltier each time Nik brought it up. 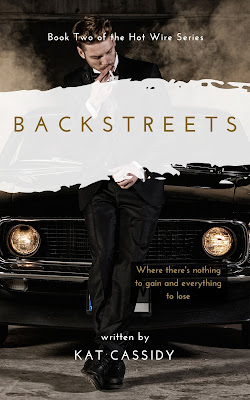 “Where there’s nothing to gain and everything to lose.”

It’s modest, but after a lifetime spent barely holding on, former car thief Peter Bauer is proud of what he’s managed to achieve. He’s got a legal, legitimate job as a mechanic, a firm grasp on his addictions, and a steady relationship with Nikos Petrakis—stable, handsome, and recently widowed. Nothing is going to upset that, not the ever-present memory of Nik's wife, not the claustrophobia Peter is starting to feel trapped in domestic bliss, not even the sudden reappearance of Peter's ex—the sexy and dangerous Stavros Giannopoulos.

But when Nik's daughter goes missing, Peter will be forced back into the seedy underbelly of the LA crime world, where anything goes. Can his and Nik's relationship survive? Can Peter?

Backstreets is the second book in Kat Cassidy’s Hot Wire series which contains themes of crime, suspense, family drama, hurt/comfort, dark humor, addiction, and abuse. It should not be read as a standalone.

Kat Cassidy is a romance novelist. She’s a dreamer, a schemer and, above all else, a believer in true love. She lives in Canada with her husband and her lovable mutt, and she likes loud guitars and strong IPAs.

Her debut novel, Night Moves, has been nominated for the Goodreads M/M Romance Members’ Choice Awards Best of 2018 for both Best Debut Book and Best Main Character.