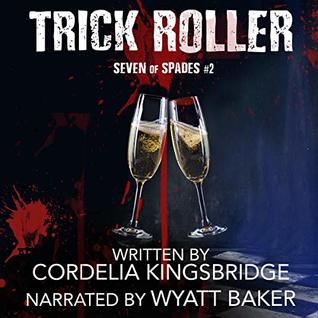 It’s the height of summer in Las Vegas. Everyone believes the serial killer Seven of Spades is dead—except Levi Abrams and Dominic Russo—and it’s back to business as usual. For Levi, that means investigating a suspicious overdose at the Mirage that looks like the work of a high-class call girl, while Dominic pursues a tough internship with a local private investigator. The one bright spot for both of them is their blossoming relationship.

But things aren’t so simple. Soon Levi is sucked into a dangerous web of secrets and lies, even as his obsession with the Seven of Spades intensifies. Dominic knows that Levi isn’t crazy. He knows the Seven of Spades is still out there, and he’ll do anything to prove it. But Dominic has his own demons to battle, and he may be fighting a losing war.

One thing is certain: the Seven of Spades holds all the cards. It won’t be long before they show their hand.

I'm a little late to the party with this series but that's a situation of my own making. I'm not sure really why but I got a notion in my head that I wanted to listen to this series on audio. So I held out...and held out...finally 'Kill Game'  was released on audio and I pounced on it like a hungry cougar...a really long in the tooth cougar...but that's another story for another day.

Anyways, I loved listening to 'Kill Game' as an audio book. For me there's just something about hearing a mystery book on audio that makes it all the more enjoyable. In general I've discovered that if it's a mystery and I liked the e-book, if it's on audio chances are I'm going to love it...I'm going to say that's a me thing, but who knows maybe there are others who feel the same.

So here I am listening to book #2 in Cordelia Kingsbridge's 'Seven of Spades' series and you know what...I mean aside from the fact that I loved it, this is an exercise in determination because damned if I don't want to got read every freakin' review out there but I've been refraining because sadly I've also learned that everyone has a different idea of what constitutes a spoiler so I've been restricting myself to checking out ratings only and then I move on but once I get done here I'm going to go read my friends reviews for this one and see what they're thoughts are because a lot of my friends read this one quite a while ago and if their ratings are anything to go but...which they usually are they loved it just as much or more than I have and I'm curious to find out why.


While I really, really liked this one...I have to admit I enjoyed 'Kill Game' just an isty, bitsy, teensy, weensy bit more....like an almost negligible amount but that's ok it often happens with series and it's such a marginally small amount that I'm not even going to try and define it. I'm just going to talk about how much I loved seeing Levi and Dominic's relationship grow, how much I enjoyed the way the mystery unfolded in this one and the inevitable out come of what unfolded...oh, and there was the court scene...Dominic's so awesome I'm giving him some serious brownie points for that one.

Levi and Dominic are becoming more and more committed to each other but it's not an easy go and neither of theses men are rushing to the alter they've both got their own jobs and friends to deal with and their own issues and some days it's just harder than others to juggle it all, but hey, it could be worse right 'The Seven of Spades Killer' could still out there but thankfully he's dead and gone right? or is he? If you ask anyone in Vegas they'll tell you yes...if you ask Levi or Dominic they'll tell you something else entirely.

I am so loving the mystery in this series I have to admit I do not have a freakin' clue whodunit? Seriously I got nothin' and I want to keep it that way until the bitter end...and that's a few books away for me.

Wyatt Baker is once again the narrator for this series and  while he's no longer a new to me narrator this is only the third book of his that I've listened to and I think he's definitely growing on me. I know his voices for both Levi and Dominic are firmly entrenched in my brain and I'm honestly hoping that I get to enjoy the rest of the series with him. I've found his narration to be solid and consistent which may not sound like much but for me it's an important thing I need my Levi to continue sounding like Levi and not suddenly turn into Mickey Mouse on me, or for Dominic to suddenly sound like Popeye or even worse to suddenly have everyone sound the same or monotone...nothing spoils a good story quicker than listening to a voice that's so uninspired it puts you to sleep, right? Thankfully, that is not the case here.

I'm really looking forward to the next book in this series on audio so cross your fingers for me that release day comes soon...if not I might have to break down and read the e-book...not that this would stop me from enjoying the audio book when it's released... because maybe I've read the book and then listened to the audio once or twice or a dozen or so times. It's another thing I do and I know I'm not the only one who does this because as well all know a good story needs to enjoyed more than once just so you can get all the details.

An audio book of 'Trick Roller' was graciously provided by the publisher in exchange for an honest review.