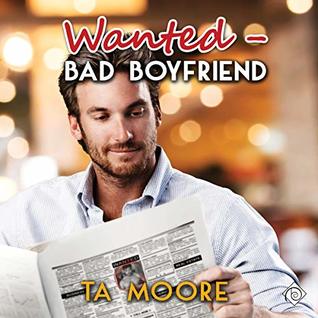 His mother. His best friend. The barmaid at the local pub. Everyone is determined to find Nathan Moffatt a boyfriend. It’s the last thing Nathan wants. After spending every day making sure his clients experience nothing but romantic magic, the Granshire Hotel’s wedding organiser just wants to go home, binge watch crime dramas, and eat pizza in his underwear.

Unfortunately, no one believes him, and he’s stuck with lectures about dying alone. Then inspiration strikes. He needs the people in his life to want him to stay single as much as he does. He needs a bad boyfriend.

There’s only one man for the job.

Flynn Delaney is used to people on Ceremony thinking the worst of him. But he isn’t sure he wants the dubious honor of worst boyfriend on the entire island. On the other hand, if he plays along, he gets to hang out with the gorgeous Nathan and piss off the Granshire’s owners. It’s a win-win.

There’s only one problem. Flynn’s actually quite a good boyfriend, and now Nathan’s wondering if getting off the sofa occasionally is really the worst thing in the world.

at least that's what Nathan Moffatt decides when he gets fed up with everyone and I do mean everyone because Nathan lives in a small town on an island...Ladies and Gentlemen...let the gossip begin...

So when wedding planner Nathan Moffatt decides he's had enough of people trying to marry him off, logically his solution is that he needs to change their thinking and make everyone want him to stay single and the solution for this problem is to get himself a bad boyfriend...you know the type...that person who takes advantage of you, treats you like a doormat and is constantly reminding you of how lucky you are that they're willing to date you...I think we've all either dated or know someone who's dated this person.

Needless to say for Nathan it's a case of good in theory doesn't always work well in practice and when he approaches the one person that he thinks can help him meet his objective he fails to consider the fact that Flynn Delaney who seems to be the least liked person in town is also his childhood crush and it just may turn out that while Flynn's considered a bad boy this doesn't necessarily make him a bad boyfriend. So what started out as a simple plan to solve Nathan's meddlesome matchmaker problems turns out to be a bit more complicated than a simple pretend boyfriend solution when feelings become involved.


T.A. Moore has given us a delightful story of small town life with all of it's meddlesome and well meaning characters. While we didn't get a lot of bad boyfriend opportunities for me it came down to the fact that Flynn was genuinely attracted to Nathan so his heart just wasn't into the whole 'bad boyfriend plan' and when they were alone both Nathan and Flynn were giving the whole 'bad' boyfriend idea a totally different spin.

For the most part the residents of 'Ceremony' struck me as a bunch of uniformed, bored, petty, gossip mongers. They loved to gossip about Flynn's so called past but in fact they collectively had no clue if there even was a past. Flynn left the island for a number of years and those years were what the locals were speculating (read gossiping) about they were clueless and as will frequently happen in small towns they simply made up stuff to entertain themselves...small towns sadly as often as not are comprised of small minds. But that's a conversation for another day.

Now as for the secondary characters in this story like so many others who read this one...I also felt that Nathan's mother was delightful and when it comes to best friends...well can I just say I'm more than happy to let Nathan find his own boyfriend but holy hell can we hold auditions for a new best friend for him? Because seriously Max was definitely a horrible warning and not a good example but then lets take a look at who his father was...yep, the biggest waste of oxygen in the whole damned town...the owner of the Granshire Hotel and Nathan's boss...Teddy.

I'm not sure that I would have found this story as entertaining as I did if I had read the book but listening to it on audio narrated by Michael Mola was for me an entertaining experience...between Nathan trying to stave of meddlesome matchmakers by putting his 'bad boyfriend plan' into action as he tries to plan a wedding that's rapidly turning into a comedy of errors, while Flynn's sometimes unusual search and rescue missions keep disrupting his and Nathan's efforts to 'date' as a town full of small minded gossip mongering, well intentioned citizen's watch on......geez, now where does that road that's paved with good intentions go to, I just can't seem to remember now. I'm sure it'll come to me eventually...

I have to admit while I haven't read a lot of books by this author...ok, I haven't read any, but I have listened to a few on audio and I've enjoyed them all and look forward to enjoying more in the future.

An audio book of 'Wanted Bad Boyfriend' was graciously provided by the publisher in exchange for an honest review.