Audio Book Review: Two Of A Kind by B.A. Tortuga 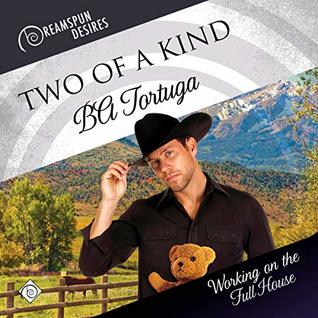 Working on a full house.

Once upon a time, Trey Williamson and Ap McIntosh had quite the whirlwind romance—but that was before family tragedy left them the guardians of five kids. Their lives have changed quite a bit over the last six years, but Ap is still on the rodeo circuit, doing what he does best in an attempt to feed all those extra mouths.

That leaves Trey back on the ranch, isolated and overworked as the kids’ sole caregiver. Something has to give, and when Ap comes home, they’re reminded how hot they burned once upon a time. But is it a love that can withstand wrangling over time, money, and the future? They have to decide what kind of family they want to be… and whether what they share can stand the test of time.

I've been a fan of B.A. Tortuga's for a while now but more recently I just haven't connected with her stories the way that I did with her 'Stormy Weather' or her 'Road Trip' series and a few others, but those two series are my absolute favorites by this author and truthfully the benchmark by which I judge her other books and maybe that's not fair but it is what it is and it's been a while since I've enjoyed a cowboy story as much as I did this one.

'Two of a Kind' for me was a fun, enjoyable, touching and just incredibly sweet story of two cowboys who suddenly find themselves with 5 children to raise following a family tragedy that leaves one man without a sister and his parents and the other without his brother and parents and now six years later things are about to take yet another drastic change.

Trey Williamson and Ap McIntosh each manned up in their own way 6 years ago and Trey set aside his dreams of college travel to be the one that stayed with the his nieces and nephews and made a home for them...while Ap went out on the rodeo circuit and did his best to with the one skill he knew he had to be the breadwinner for this cobbled together family. But Ap comes home for Thanksgiving and Christmas every year and so far it's worked but Trey's finding himself  at this wits end and he knows that their kids need him but he desperately needs a break.

When Ap get the call telling him he needs to come home he does. He gets it truly he does...being the only parent to 5 kids is a job that he knows he's not up to doing, but he's determined to step up and give Trey a much needed break.


There really was a lot about this story that I enjoyed Trey and Ap have a history together but they were young and when tragedy struck it was put aside. This one is friends to lovers, second chances with a touch of starting over and a pinch of the grass is always greener...because Trey's missing the life he didn't get to have and he's a little jealous of Ap being able to travel, see a bit of the world and spend times with adults and yeah, there's also the sex...it's bee a while for Trey but if you ask Ap, he'll tell you it'd be nice to sleep in a real bed at night, spend time with his nieces and nephews...watch them grow up a bit...or at least that's what he thinks most of the time...until he's left in charge of those same nieces and nephews for a few days, then he finds himself wondering 'how the hell Trey does it day in and day out. His admiration for Trey grows right alongside of his attraction for Trey.

I enjoyed the interaction between Trey and Ap as well as their interactions with the children and as a family. it wasn't always perfect and oftentimes there weren't enough hours in the day to do what needed to be done much less anything that they wanted to do...in other words it resembled real life much more than it didn't. There were budgets and saving for college, working more than one job to make ends meet and so many other little things that found me thinking 'oh man can I relate to that'.

Now I have to admit there was only one thing that gave me serious reservations and that was the thought of this story on audio and the narrator was John Solo...I've had a bit of a hit and miss relationship with this narrator and even more so I have a hit and miss relationship with pretty much any narrator when children's voices are involved so I won't lie...reservations...I had them.

I ran off to audible.com and clicked play so I  could listen to the sample and fortunately I actually got to hear some of the children's voices which isn't always the case and thankfully there was enough of a sample for me to decide that I could do this and happily I was right. My past experience with audio book children has more often than not detracted from my overall enjoyment of more than one audio book but this one was not one of those books. This for me was one of the narrator's more solid narrations and given that he was doing the voices for not one or even two children but five, I think that says a lot especially coming from someone who tends to shy away from audio books with children in them no matter who the narrator is.

'Two of a Kind' is a fun, sweet, heartwarming story about love and hope and the promise of a future that may not be what either of these men thought they wanted but in the end proved to be everything they needed.

An audio book for 'Two of a Kind' was graciously provided by the publisher in exchange for an honest review.