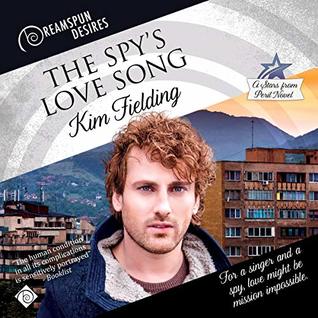 Look out James Bond...Jaxon Powers is on the case...

Powers is famous the world over and has fans even in small unheard of Vasnytsia wjith its tyrannical dictator and its this fame that the state department wants to use to get one of their agents into Vasnytsia on a covert op. There are just a couple of obstacles that could prove problematic to the mission the first one being that Jaxon can only take one person with him and that person needs to be Reid Stanfill and the second one is that being 'gay' in Vasnytsia can get you thrown into jail.

To say that Reid and Jaxon don't start off well is more than a bit of an understatement, but as they travel through Vasnytsia and come to depend on each other for their very survival they also begin to realize that there's more to each of them than the other realizes. Reid quickly realizes that Jaxon isn't an overindulged, success story who never really outgrew the life of privilege that Reid believes him to have grown up surrounded by. Just as Jaxon also comes to realize that there's more to Reid than his near military precision hair cut and stuffy suits.

Jaxon and Reid's story was a case of opposites attract...with just one catch Jaxon is on the cusp of what basically amounts to a mid-life crisis when he wakes up in a hotel room that looks like the Armageddon has happened and Jaxon slept through it.

These men definitely locked horns on more than one occasion leaving both men angry, frustrated and maybe knowing the other just a little bit better.


When a failed attempt at murder quickly makes Reid realize that he was the intended victim and someone is definitely on to who he truly is and why he's in Vasnytsia with Jaxon. Reid's first priority becomes to convince Jaxon to get out of Vasnytsia as quickly as possible, but Jaxon's determined not to abandon the man who he's beginning to feel a very strong attraction for so leaving is not on his agenda.

As Jaxon and Reid work together gaining the help of some of Vasnytsia's citizens who want to see their government over thrown they devise a plan that will hopefully see Reid's mission goal accomplished, but it's going to take the determination of both men to see it through if they have any hope of getting out of Vesnytsia alive.

'The Spy's Love Song' was one of those stories that is best enjoyed with a moderate suspension of belief and the desire to read an entertaining story that leaves reality behind at times...but not too far  behind...and weaves in a touch of  romance.

While this is by no means my first time reading/listening to a Kim Fielding story, it was my first time listening to an audio book narrated by Drew Bacca and thankfully I'm pleased to say that Mr. Bacca has one of those voices that add character, depth and emotion to a story making for an enjoyable listening experience and I'm looking forward to hearing more from this narrator in the near future.

An audio book of 'The Spy's Love Song' was graciously provided by the publisher in exchange for an honest review.