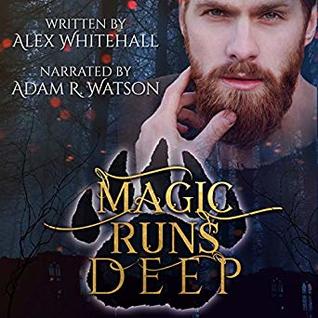 
For the last five years, Veier has been chained to a king’s throne in his bear form. When a neighboring kingdom overthrows the crown, Veier’s imprisonment ends, but true freedom is not so easily earned. With blood on his hands, he needs someone with patience, strength, and trust to help him become the person he was before and prove to the invaders that he isn’t the monstrous king’s loyal pet.

Elrid, the invading king's brother and a powerful mage, is everything Veier despises. He’s also the only thing between Veier and execution, because he thinks he can help Veier change from an aggressive bear shifter into a reasonable man. While the pair have a rough start, with long talks and mutual leaps of faith, they begin to care for each other.

However, the closer Veier gets to his freedom, the closer he is to losing Elrid. He must find balance in his heart and his life if he wishes to truly claim the freedom he’s been given—and the man he loves.

This is not a romance story, but there is a romance in it, and even more importantly, there is one seriously good story to be had.

Aside from this book the one thing that i know Alex Whitehall and Adam R. Watson  have in common is that they're both new to me, which is kind of a scary combination because....'ohmygod!!! I said I'd review this and what if I hate it because I can't say I love something if I didn't that's just not something that I like most people would be comfortable doing...so in a nutshell...I was a little nervous going into this. Enough that I actually listened to the first few minutes and went off to listen to something else but that's only a good deflection for so long and then I had to make myself come back to this and thankfully that turned out to be a much better life choice than I had anticipated..

In the interest of being fair I started back at the beginning and the one thing I realized right away was that the lack of success on my first listen was just me not in a good frame of mind so I'm not sure that much of anything would have worked for me that day but on my second try I was barely past where I'd stopped the first time and I was all in and more than happy just to sit back and enjoy the story.

If I had to classify this one I'd probably call it historical fantasy with a touch of romance but regardless of that I'd definitely call it good.


Veier has spent the past 5 years of his life trapped in his bear form and held by a magic spell as the pet of a king. When a neighboring kingdom overthrows the king, Veier becomes their prisoner and while most are of the opinion that Veier has lost his humanity and shouldn't be allowed to live...not all share these feelings and the new king's brother, Elrid believes that while Veier's humanity maybe be a little misplaced it's still there.

As much as Veier tries to fight it he comes to respect Elrid and appreciate that Elrid is both honest and trustworthy and that his choice to try and help Veier find his humanity and ultimately return home to his family is sincere.

Most of this story focuses on Elrid and Veier's efforts to gain his freedom but in doing this the men spend time together getting to know each other and helping each other to learn about their people. It takes an actual threat to Elrid's life to make his brother the king see that Veier's humanity is very much intact and working and sadly it's the realization that Veier's humanity has been restored and is firmly in place that also brings about their separation when Veier is allowed to go home to his people.

From start to finish this book had such a soft and gentle feel to it. In spite of the battles and attempted assassinations it was the chemistry between Eldrid the strong, powerful yet gentle and soft spoken magician with Veier, the kind and compassionate ursine shifter whose pure physical size and strength was intimidating enough without the knowledge of the power he wielded in his ursine form that shaped this story.

I loved the overall feel of this story and listening to Adam R. Watson's narration of this story was every bit as delightful as the story and definitely reinforced the the overall feeling of the story itself for me. As much as I enjoyed the entire story for me the icing on the cake was definitely the ending and the epilogue...both were added the perfect touch to make this a 5 star story for me.

An audio book of 'Magic Runs Deep' was graciously provided by the publisher in exchange for an honest review.