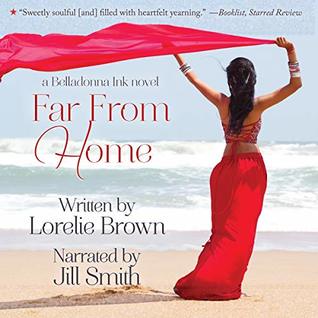 My name is Rachel. I’m straight . . . I think. I also have a mountain of student loans and a smart mouth. I wasn’t serious when I told Pari Sadashiv I’d marry her. It was only party banter! Except Pari needs a green card, and she’s willing to give me a breather from drowning in debt.

My off-the-cuff idea might not be so terrible. We get along as friends. She’s really romantically cautious, which I find heartbreaking. She deserves someone to laugh with. She’s kind. And calm. And gorgeous. A couple of years with her actually sounds pretty good. If some of Pari’s kindness and calmness rubs off on me, that’d be a bonus, because I’m a mess -- anorexia is not a pretty word -- and my little ways of keeping control of myself, of the world, aren’t working anymore.

And, if I slip up, Pari will see my cracks. Then I’ll crack. Which means I gotta get out, quick, before I fall in love with my wife.

Well that was...different...interesting and...a big step outside of my comfort zone, which is something that I think does a mind, body and soul good from time to time.

So what was so different about this story for me, you might ask yourself...well there are two things...
1. It's narrated by a woman.
2. It's a f/f story of which I've only ever read one other.

f/f stories as a rule just aren't my thing which is the biggest reason why I haven't listened to many...ok, any female narrators. I tend to listen to audiobooks from the m/m genre and for me listening to a woman do the voices for an audio book that's predominantly m/m doesn't work any more than listening to a man do a f/f story would...so this is totally on me...personal preference and nothing else...no good or bad involved here.

And now here I sit having listened to an audio book that for a few reasons caught my attention...

The first one being the narrator...seriously, this was the FIRST TIME EVER!!! that I listened to the full audio sample on the first try with a female narrator...so good on you, Jill Smith... I was impressed and my attention was captured.

The next reason being the story...it sounded sweet and pretend girlfriend/boyfriend is  one of those tropes that I like and in this case it was more like pretend spouses giving it the potential for some really cute and humorous moments to balance out the more serious issue which was Rachel's struggles with anorexia.

As with any story there were things I liked and things I didn't...I liked Pari and I especially liked the relationship between her mother and her. It wasn't perfect but there was a definite sense of a strong and positive mother/daughter bond between them even when they were not of like minds.

I liked that while Pari might have been living in America we were given a successful and strong female character who wasn't 'simply an American' but an immigrant who came to the the United States to follow her dreams...novel concept there...I'm sure it's never happened in the real world, right? ;)

Ok, so as much as I like Pari and her mom and I also enjoyed some of the interactions between Pari and Rachel...what I struggled with was Rachel. I really wanted to love this character. I know I felt bad for her...she struggled with her anorexia and she was trying so damned hard to beat it and maybe if the story hadn't come strictly from her perspective I would have seen her as a really courageous young lady rather than having her turn into someone who for me started to sound a bit whiny and seemed to be experiencing a bit of 'poor me' syndrome. I really, really didn't want that image of her but that's what I ended up with.

Even more than the overkill on the anorexia, sorry but really sometimes less is more and if Rachel had a bit more diversity to her thoughts than 'musings on her anorexia' and all the reasons that she was attracted to Pari...because yes we have a case of insta-lust with a good dose of GFY going on here. Rachel was straight...not bi...straight as can be attested to but the considerable number of men she's slept with...hey, those are basically her words not mine.

I actually finished this book a couple of days ago and was left with a ratings quandary because if I rated this with total honesty and accuracy it would probably go something like this...

Story concept...4 stars
Story execution...2.5 stars
Narration...5 stars (ok, a little biased here because first time ever female narrator that I liked enough to listen not only to the sample but the whole damned book!!!)

So at the end of it all I'm calling it a day with an overall average of 3 stars which still when you think about it for someone who rarely and I do mean rarely ventures into the world of f/f and who was listening to an audio book narrated by a woman for the first time EVER!!! I think this ended fairly well...will I suddenly start listening to this genre on a regular basis...I doubt it...will I venture out of my snugly little m/m box to try something else in future...why not? One never knows what they'll find if they just step out side of the box.

An audio book of 'Far From Home' was graciously provided by the publisher in exchange for an honest review.