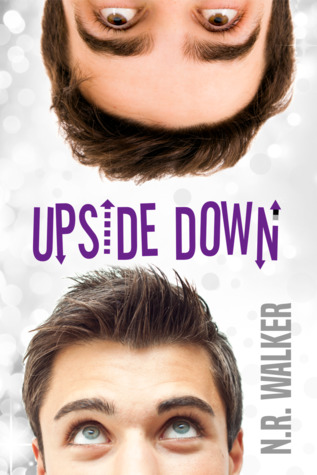 Jordan O’Neill isn’t a fan of labels, considering he has a few. Gay, geek, a librarian, socially awkward, a nervous rambler, an introvert, an outsider. The last thing he needs is one more. But when he realizes adding the label ‘asexual’ might explain a lot, it turns his world upside down.

Hennessy Lang moved to Surry Hills after splitting with his boyfriend. His being asexual had seen the end of a lot of his romances, but he’s determined to stay true to himself. Leaving his North Shore support group behind, he starts his own in Surry Hills, where he meets first-time-attendee Jordan.

A little bewildered and scared, but completely adorable, Hennessy is struck by this guy who’s trying to find where he belongs. Maybe Hennessy can convince Jordan that his world hasn’t been turned upside down at all, but maybe it’s now—for the first time in his life—the right way up.

First of all, everyone should have an Angus and a Merry and a Michael. Those three are the very best friends a person could ever ask for, and even though they are fictional, they totally felt real. To me.

Where do I even start with this book?

It's funny. Laugh out loud funny in parts, small chuckle funny in others, and giggle-snorts funny in yet other parts. Jordan is a hoot. Zero filter, blurts out whatever comes to his mind, and loves the word fuck in all its many variations.

It's about self-discovery, about learning and accepting who you truly are, and realizing that normal is fucking overrated and that the world's definition of normal is skewed anyway. I absolutely loved how respectfully and realistically the author wrote two ace characters, neither of whom wants to have any kind of sex, who only want kisses and cuddles, and gave her readers tons of useful and clear information about what it means to be ace without ever going into preacher mode.


It's a little angsty, primarily because Jordan is coming to terms with his realization that yes, he's ace, and yes, he's maybe, possibly, for sure, falling for Headphones Guy, who's also ace, and goddamn motherfucker, he sure as fuck doesn't need or want another label, OMG.

It's a little angsty because Hennessy is still struggling with giving his heart away again, when he's only just now gotten over the heartbreak of his previous relationship with a guy who wanted and needed more than Hennessy was able to give. He is very upfront about his needs and his expectations for a relationship, and very clear that there will be no sex at all, but kisses and cuddles are awesome, and yes, please.

Obviously, because both Jordan and Hennessy are ace, there is zero sex in this book, but there are amazing kisses and full body cuddles, and watching movies while lying on the couch, and talking about books and meeting each other's friends, and being amazed at the soup crew on the bus who are all invested in the growing relationship between Hennessy and Jordan.

And then there's a very short period during which Jordan freaks the fuck out and bails, and almost ghosts on Hennessy. I'm only telling you so you're not hit with that out of left field like I was and so you don't have that momentary panic attack like I did because JmotherfuckingC, everything was going so well, and then the author hit me with that. NO BUENO. But I forgive you, NR Walker, I do, because when I thought about it for a while, it became clear that this needed to happen so Jordan could understand... well, you know what I'm talking about.

This is a heartwarming, charming, sweet, LOL-funny, and thoughtful book, and it made me swoon and awwww and giggle and sniffle, and motherfucker, it was perfect. Also, it's a small fucking world, don't you know?

ALL THE FUCKING STARS!!! GET THIS BOOK NOW!!!


** I was blessed with a free copy of this book by its author (THANK YOU). A review was not promised in return. **

Buylink is provided as a courtesy. We are not affiliated with any bookseller.

Email ThisBlogThis!Share to TwitterShare to FacebookShare to Pinterest
Labels: 5 stars, ARC, asexual/aromantic, coming out, humor, little to no angst, M/M, no sex, NOT in America, romance, self-discovery, self-published, the giggles kill me, would give more stars if I could