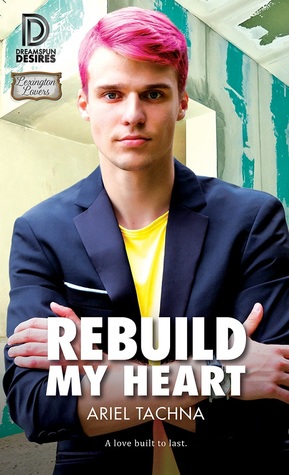 I'm a bit late with this review - my apologies to the author and publisher who generously provided me with a copy of this book.


This is the 4th book in the Lexington Lovers series, but can be read as a standalone. Owen owns a bookstore that features a large section of LGBTQ books. He lives above the bookstore and needs more space as well as some modernization of the house. Owen was disowned after college by his deeply religious family for being gay, and while he tries to stay in touch for his nephew's sake, his brother won't talk to him at all unless Owen repents his homosexuality and returns to the folds of the family's snake-handling, rather extreme cult church. Finding comfort in his books, Owen enjoys finding the right book for each customer, and while he's somewhat insecure and shy when it comes to romantic relationships, he has an inner strength that really came through. And the fabulous hair colors!

Derek is owns a construction company with Thane Dalton (from book 3), and he's got Thane's teenage nephews working with him, as they renovate the apartment in which Owen lives, and expand the bookstore. Derek's family is pretty useless, though he still allows them to have a lot of control over his life, which for a man of 40 is a bit ridiculous. He's a good man, and he tries hard to do the right thing, though he can be a bit of a dumbass on occasion.


The relationship between Owen and Derek grows slowly. Owen finds it hard to trust due to his previous relationship, and Derek initially is kind of put off by Owen's colorful hair. The bookstore owner just isn't Derek's type, and since Derek usually doesn't do relationships, because of his father and stepmother and his unwillingness to come out, their romance is slow burn. I quite liked both MCs though I was more enamored with Owen than with Derek. While they're very different, they both had issues to overcome, and I was rooting for them both. Until Derek pulls a really selfish stunt that had me wanting to reach into the book to smack him over the head... but you read this for yourself.

I would have liked to see Derek take more of a stand on his own family issue a bit sooner than he did, and I would have liked to see him grow a bit faster. I mean, I understood where he was coming from, but the way he reacted to Owen's nephew coming to stay was rather immature and unreasonable. Still, once he pulls his head out of his rear end, their HEA is all but ensured.

I enjoyed this book, and I think you will too. Give it a shot.